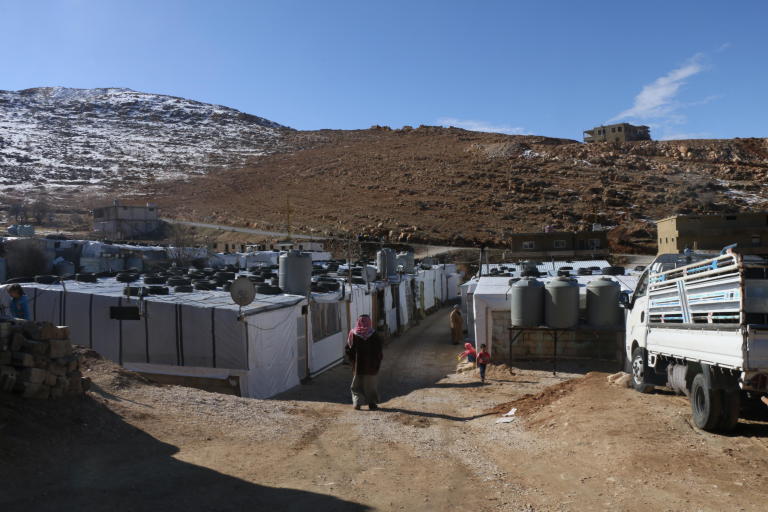 
Surviving winter in a tented settlement

By Racha El Daoi Published 07. Feb 2020
Lebanon Shelter and settlements Syria crisis War and conflict
Read caption The informal tented settlement in the village of Arsal where Moayed lives with his family. Photo: NRC Lebanon
Moayed had to demolish his concrete shelter last summer by order of the Lebanese authorities. Now he and his family, who fled to Lebanon from Syria in 2013, are living in a makeshift tent in the hills. As winter sets in, they are struggling to cope with the freezing temperatures and biting winds.

Moayed fled to Lebanon together with his wife, mother and six children when the fighting intensified in their home town of Qusayr, western Syria. Leaving both his home and business behind was a difficult decision but he knew it was the only way to keep his family safe from the shelling.

New struggles in a new land

In Lebanon, the family moved to an informal settlement in the village of Arsal in the Bekaa Valley, an area known to be prone to harsh winter conditions. Hoping life would be better in their new home, Moayed soon realised every day would be a struggle.

“I worry so much about my family during the winter because we do not have proper walls to keep the cold out,” says Moayed.

“During the summer of 2019, we had to demolish the concrete walls in our home because of the regulations of the Lebanese authorities. We went from living in a protected shelter with walls to living in a tent covered with plastic sheets. This is not enough to protect us when it snows and rains.”

Lebanon has the highest number of refugees per capita in the world, amounting to over a quarter of the country’s total population. This has created a huge strain on its infrastructure and public services.

Under Lebanese law, Syrians are not considered refugees, but temporarily displaced persons. The Lebanese government opposes the creation of formal camps, and its building codes and policies restrict the construction of tented settlements with permanent structures. Many concrete homes previously built for refugees have had to be destroyed.

“We can see and feel a big difference between this and last winter,” Moayed tells us. “It is freezing inside the tent during the strong winds even when we have the heater on. We are worried it will collapse on us.

“When it rains, water leaks into the tent from everywhere: the sides, the ceiling and even from underneath the ground, leaving all our belongings wet.”

Every informal tented settlement in Lebanon has a “Shawish” who acts as the main contact for aid organisations.

Through the local “Shawish”, the Norwegian Refugee Council (NRC) was made aware of Moayad’s particularly challenging situation. With the support of European Civil Protection and Humanitarian Aid Operations (ECHO), our teams distributed a shelter kit including timber and plastic sheeting to Moayad and his family to prepare their tent for winter conditions.

Moayed has a disability affecting his mobility, which makes it impossible for him to work and provide for his family in Lebanon. He relies on assistance from aid organisations working in the area, and sometimes resorts to incurring debts to cover the needs of his family.

“It is difficult not being able to provide for your family. In Syria, my disability didn’t prevent me from working as I owned my own clothes shop and my mother was employed in the agriculture sector. We had a good life and never relied on anyone’s assistance to make a living,” he explains.

“I want to go back to Syria but it needs to be safe and stable so that we can work and rebuild our home. When safety can be guaranteed and conditions allow for it, I will take my family and return home.”

Read more about our work in Lebanon