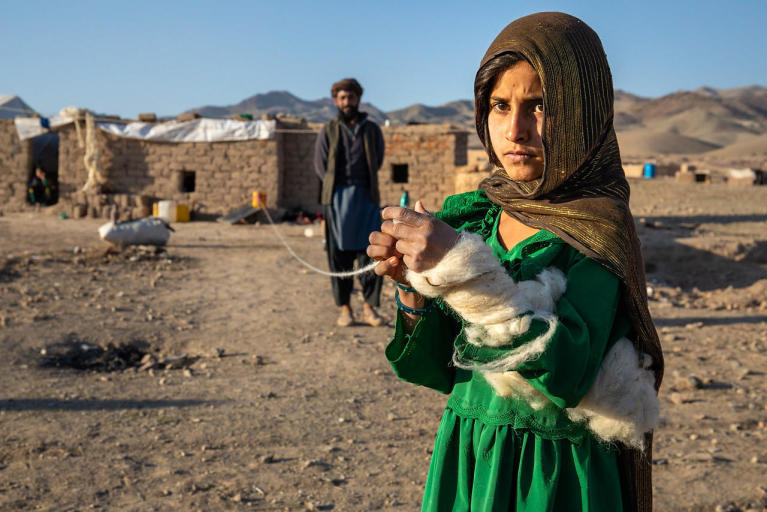 
Solidarity must not stop at our borders

Roald Høvring Published 17. Apr 2020
Coronavirus
Read caption AFGHANISTAN. Maliya, 12, spins wool all day long to help feed her family. Photo: Enayatullah Azad/NRC
“We have heard about the dangerous virus and that we must be careful about washing our hands, but how can we protect ourselves when we have don’t have soap or shampoo?”

These are the words of Maliya, a 12-year-old girl from Afghanistan. Her family has been displaced by war and drought. She lives in a settlement with 10,000 other families a half hour’s drive north of the city of Herat. They lack everything they need to follow the international disease control guidelines.

I met Maliya just before Christmas. Then, she went to a temporary school that the Norwegian Refugee Council (NRC) had set up in the settlement. After school, she would spin and sell wool to help feed her family. She was a happy and optimistic girl, but she feared the winter, which had taken her little sister’s life the year before. Now, Maliya has yet another worry, and she fears what could happen next.

The settlement where Maliya lives is not far from the border with Iran, which is one of the countries most severely affected by the coronavirus pandemic. In recent weeks, thousands of Afghan migrants and refugees have returned home. Authorities and humanitarian aid organisations are concerned about what could happen if the virus spreads to the already vulnerable population on the Afghan side of the border.

When the crisis hits

For the past 25 years, I have been trying to recount the everyday lives of girls like Maliya and families displaced by war and persecution. Trying to get people to understand what it means to live in uncertainty and fear: to put your life on hold; to have no school, no work and no health services; to be prevented from moving freely or travelling to other countries; to be isolated and lose contact with friends and family; and to have no idea what the future will bring.

The coronavirus pandemic has now given us all an opportunity to experience these feelings first-hand. Here in Europe, many people are afraid of losing their jobs and millions have been laid off. In many countries, both schools and kindergartens are closed. National health services have been brought to their knees. Freedom of movement is severely restricted. People in Norway are not allowed to visit their mountain cabins. International trips have been cancelled. Our lives have been turned upside down. Our everyday lives are marked by uncertainty and fear.

Many have compared our current situation with World War Two. At the end of the war, a number of Europe’s cities lay in ruins. Millions were displaced from their homes. A large-scale act of solidarity was set in motion – solidarity that extended beyond national borders. When the United Nations was established in 1946, its main focus was international solidarity, lasting peace and the desire to lift all the world’s peoples out of poverty and destitution.

Several countries initiated major international relief operations. The Norwegian Parliament established “Europahjelpen” (Aid to Europe) to help the war-torn continent back on its feet and find good, lasting solutions for Europe’s refugees. Norway sent tonnes of food and all of its surplus stock south. At the same time, we welcomed traumatised and malnourished children who needed to recover from the war. Many of them still speak Norwegian to this day, after long stays on Norwegian farms. “Refugee” was a positively charged word. In fact, it was almost a designation of respect.

Europahjelpen was later discontinued and reconstituted as what is today the Norwegian Refugee Council. The solidarity and willingness to help the world’s refugees continued into the 50s, 60s and 70s. Our annual fundraising campaigns mobilised many people, and the refugee cause was the one that engaged people the most, with the exception of cancer.

Can we do it again?

Can we manage to recreate some of what we achieved in the wake of World War Two? My hope is that the coronavirus crisis will better enable us to show compassion and empathy for Maliya and others in her situation, and that it will trigger a “pandemic of solidarity”.

In Norway, we wholeheartedly support national solidarity. Everyone agrees that we must stand together in the fight to stop the spread of the coronavirus pandemic. But this solidarity must not stop at our borders.

We are told that the most effective measures are social distancing and frequent and thorough handwashing. For those of us living in peaceful, rich and prosperous countries, this is not such a big deal. Most of us have bank accounts, tiled bathrooms and enough soap. We also have a well-developed and functioning national health service. For others, elsewhere in the world, it is not as easy to follow these international guidelines.

More than 70 million people worldwide have been displaced by war and persecution. Eight out of ten live in low- and middle-income countries, with poor health, water and sanitation systems. Many live in refugee camps, where they are unable to practise social distancing and where they lack both water and the opportunity for good hygiene. Among the over 190 countries that have reported cases of Covid-19 so far, more than 34 of them host large groups of refugees.

The pandemic now threatens overcrowded camps and settlements in Bangladesh, Lebanon, Nigeria, Somalia and the Greek islands. The consequences could be catastrophic. The virus will also create fear, death and chaos when it hits Syria, Yemen and Iraq, where long-standing wars have destroyed hospitals and caused the health system to collapse.

NRC has long experience in dealing with epidemics and crises in the world’s most vulnerable areas, and we are stepping up our efforts to prevent and limit the spread. But we too are affected by travel restrictions and must take precautions to prevent our colleagues from being infected or infecting others.

We are currently working to provide information on how Maliya and other refugees and internally displaced people should protect themselves against the virus and prevent its spread. We are also working hard to ensure clean water and good sanitary conditions, in addition to distributing soap and hygiene items. But there is a huge gap between needs and what authorities and aid organisations are able to provide.

Read more about NRC and our coronavirus response.

In the same boat

Our national solidarity already plays an important role in preventing the spread of the virus by ensuring that each and every one of us washes our hands and limits contact with others. Now we need a global boost to limit the spread of the virus. The world’s response to the coronavirus crisis must include everyone – including those who have been forced to flee their homes. The only way to really flatten the curve of infection is to make sure that those living in the world’s most vulnerable areas have the same opportunities to protect themselves as everyone else.

Coronavirus does not discriminate against anyone. Nor should we when it comes to supporting those most at risk of infection and illness. International solidarity is more important than ever. If we create long-lasting sanctuaries for the virus among the world’s poorest and most vulnerable, it will come back and hit us again and again. We are not helpless. We can show solidarity and compassion and protect and help the most vulnerable among us. We can act for the common good and save many lives. Solidarity must not stop at our borders.

ROALD HØVRING is Senior Adviser at the Norwegian Refugee Council (See photo below).