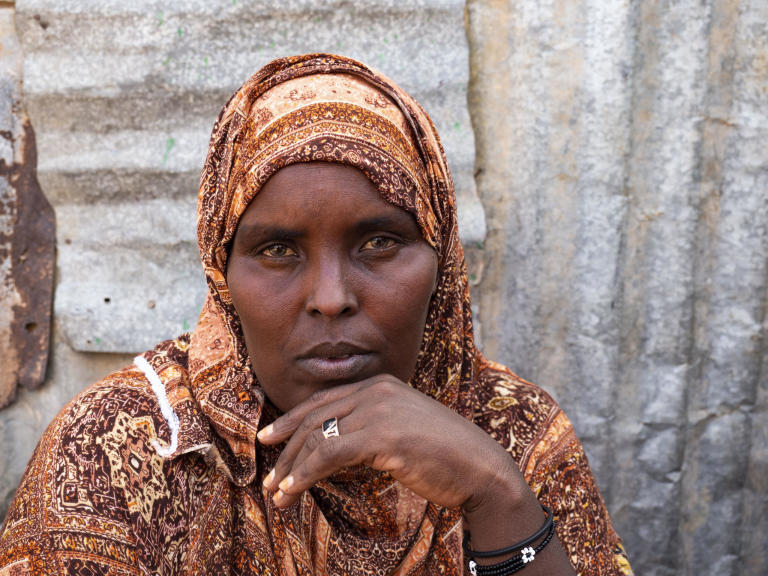 
She fears her daughter was taken by lions

By Eirik Christophersen Published 15. May 2020
Somalia War and conflict
Read caption Farhiyo Iishaar Omar, 33, lost her oldest daughter when armed men attacked her house in the Ogaden region of Ethiopia. Photo: Ingrid Prestetun/NRC
Armed men stormed into the house. Two uncles were shot right in front of the rest of the family. Farhiyo and her family fled with only the clothes on their backs. Her eldest daughter disappeared in the panic.

Kadia was 13 years old when the attack happened in 2016. She ran from the house to escape the attackers. Since then, Farhiyo Iishaar Omar, 33, has not seen her daughter.

The rest of the family fled from Kebri Dehar in the Ogaden region of Ethiopia to neighbouring Somalia without Kadia. They had no time to gather their belongings, and their livestock was chased off by the attackers. Most of their journey was by foot, and it took three weeks before they arrived in the Puntland region of Somalia.

Believes her daughter was taken by lions

Farhiyo is a lively woman who jokes and laughs a lot. But as she begins to tell us about what happened the day they were forced to flee their home, her eyes become dark and distant. We can see Farhiyo’s distress at the memory

Everything happened so quickly that they had no time to bring any of their belongings. But far worse, they couldn’t find their daughter Kadia before they had to leave. They hoped for a long time that she had managed to reach safety, but as time went by without any news, their hope grew more and more faint.

Farhiyo called her neighbours and friends who still lived in the area, but no-one had seen Kadia. Shortly after the attack, some of the neighbours had seen a dead body on the ground, but they were so afraid of the attackers that they were unable to find out who it was. When they returned a few days later, the body was gone.

Farhiyo fears that the body was her daughter – killed by the attackers and later taken by lions living in the area.

Fled from Ethiopia to Somalia

Although Ethiopia has seen positive development in many areas in recent years, which led to Prime Minister Abiy Ahmed receiving the 2019 Nobel Peace Prize, violence and displacement have still affected parts of the country. One of the hardest hit areas is the Ogaden region, where Farhiyo and her family lived. Most people living in this region are ethnic Somalis.

New figures from the Norwegian Refugee Council’s Internal Displacement Monitoring Centre show that over one million people were internally displaced in Ethiopia in 2019 alone. This trend has been going on for years, with many also fleeing across the border to neighbouring Somalia. Although Somalia has over 2.6 million internally displaced people of its own, it has also received several refugees from Yemen and Ethiopia.

Farhiyo, her husband and their six other children now live in a refugee camp outside Garowe. In addition to Ethiopian refugees, many internally displaced Somalis live in the camp. Most have fled because of the recurrent drought in Somalia, but some have also fled the bloody conflict in the south of the country.

NRC provides emergency aid to the people living in the camp – in the form of cash, so that they can buy food and necessities themselves. The large number of new internally displaced people in Somalia has increased the need for emergency aid, but humanitarian grants have not increased in line with the need.

Like many refugees and internally displaced people, Farhiyo struggles to make ends meet. Farhiyo’s husband is ill and unable to work, making it extra difficult for the family.

The younger children play, seemingly carefree, with other children in the camp. But Sabrin, 10, who was seven years old when the family fled, remembers how scared she was when it happened. She says she notices that the loss of her big sister has taken a heavy toll on her mother. She is also concerned that the makeshift shelter they have built in the camp is in poor condition and could start leaking during the rainy season.

Attacked with a knife in the camp

Farhiyo shows us a nasty cut that her 18-month-old son Yasin has on his arm. She says that a man entered their hut and attacked her with a knife while she was nursing her son. He tried to stab her in the chest. She managed to twist away and avoid being hit, but instead the knife slashed the baby boy in her arms.

She doesn’t know if the man who attacked her was looking to rape her or if he wanted to steal from the family. He fled when she screamed.

The experience has made Farhiyo feel unsafe, and she tries to avoid going out alone after dark. Rape and other forms of assault are major threats to many women living in refugee camps. Now, when she has to go to the bathroom in the evening, she asks someone to come with her.