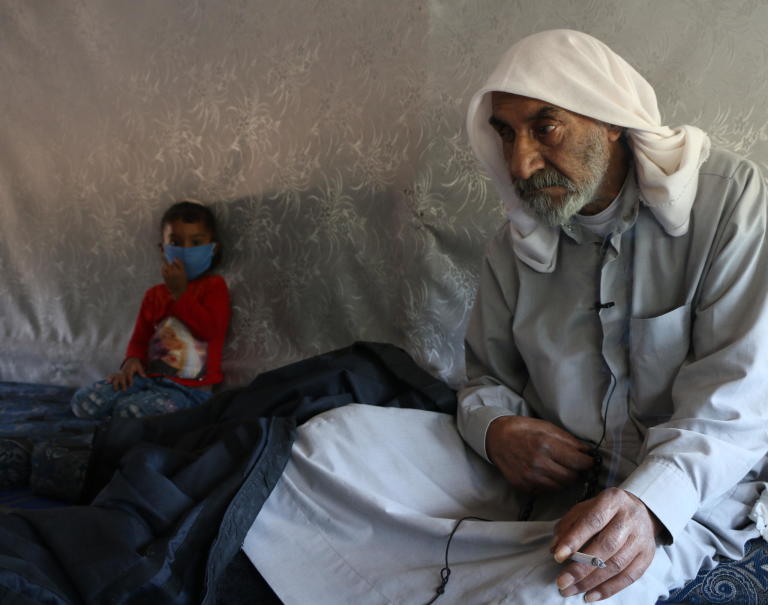 
Seeking a better life for his grandchildren

Zaynab Mayladan Published 21. Dec 2020
Lebanon Information, counselling and legal assistance (ICLA)
Read caption Khodor with one of his granddaughters, inside their home in an informal tented settlement in the northern Bekaa valley. Photo: Zaynab Mayladan/NRC
“We lived in fear in Syria and I don’t want my grandchildren to feel the same in the future,” says Khodor, 70, a Syrian refugee in Lebanon. The Norwegian Refugee Council (NRC) is helping his family to get civil documentation they need so they can face the future with confidence.

Nine years into the Syria crisis, Lebanon remains the country with the largest number of refugees per capita in the world, hosting an estimated 1.5 million Syrians.

Since mid-October 2019, Lebanon has been experiencing political and social unrest and a deteriorating financial situation. Then, in August 2020, an explosion devastated half of the capital city, Beirut.

These events have had a major impact on the lives of already vulnerable communities all over the country. Syrian refugees have been particularly affected, lacking any kind of safety net. With work becoming scarce and unemployment increasing, Syrians are struggling to make ends meet to provide for their families.

In addition, refugees in Lebanon continue to face barriers to obtaining civil documentation, especially birth certificates. This jeopardises their children’s right to an identity and may limit their access to services such as education, healthcare and humanitarian aid when they are growing up.

The Norwegian Refugee Council (NRC) works to support refugees and displaced people in over 30 countries around the world, including Lebanon. Support our work today

Khodor, 70, is originally from Homs, in western Syria, and fled to Lebanon with his family in 2011 shortly after the Syrian war began. He and his family found shelter in the form of a tent in Masharih al-Qaa, a little town near the Syrian border.

Lebanon has brought the family some good memories. Khodor’s children got married and he is now a proud and caring grandfather. However, life has not always been easy. Khodor fled Syria to seek a safer life for his family, but found himself having to worry more and more about their future as years went by.

“We lived in fear in Syria and I don’t want my grandchildren to feel the same in the future,” he says.

“I was a shepherd with my own house, but unfortunately during the war it was taken away from us by force by people who are now occupying it,” Khodor continues.

“Nothing is affordable anymore”

As the Lebanese currency has lost its value, prices in the country have begun to rise sharply. This has made life difficult for Khodor and his family.

“The oil tank used to be 30,000 LBP, now it is 110,000 LBP. It is unbelievable! The prices are unreasonable, nothing is affordable anymore, and how can we make a living?”

How we helped Khodor and his family

When Khodor’s grandchildren were born, the family was not able to register their birth because they didn’t know about the process and they lived in a distant town with limited transport options.

“My children are all legally registered in Syria and they served in the army. I know how important it is to have all your legal documents in order and I don’t want my grandchildren to suffer because of it,” says Khodor.

As part of NRC’s Information, Counselling and Legal Assistance (ICLA) programme, we reached out to Khodor’s family through a joint project with the International Rescue Committee (IRC) and Humanity Inclusion (HI), with support from the UK’s Foreign, Commonwealth and Development Office.

Our aim was to help Khodor’s family register the births of those children who were born in Lebanon. We gave them information on legal assistance and referred three of Khodor’s grandchildren to the International Rescue Committee (IRC), who supported them with the birth registration process.

Khodor still dreams of his old life in Syria. Recalling happy memories is part of what keeps him going. “The situation was very good in Syria before the war, very safe,” he says.

“I really miss my home, my relatives, my hometown and my country. However, in Syria today, I don’t have anything that I can return to. I only have my house – which might be occupied.”

“It’s safe here in Lebanon. We don’t hear gunfire and we feel secure knowing that no-one will hurt us again. But of course, we want to return when the conditions allow it.”

We conduct outreach activities in refugee communities, provide information sessions on legal protection topics, and ensure the safe identification and referral of people to service providers.

Together with specialised lawyers, our teams organise legal clinics to provide tailored legal counselling. We use mobile legal clinics to help refugees access legal services in places where freedom of movement is limited.

In complex cases and where refugees are vulnerable, we offer legal assistance and representation at administrative authorities and courts.

We also aim to address the legal challenges faced by the Palestinian refugee community in Lebanon, through the provision of legal services focusing on civil documentation and housing and property rights.

During the outbreak of Covid-19 in Lebanon, our ICLA services have been implemented remotely wherever possible. Our staff and lawyers have provided information and counselling by phone, enabling us to continue delivering legal services in response to refugees’ needs during these challenging times.

Find out more about our work in Lebanon