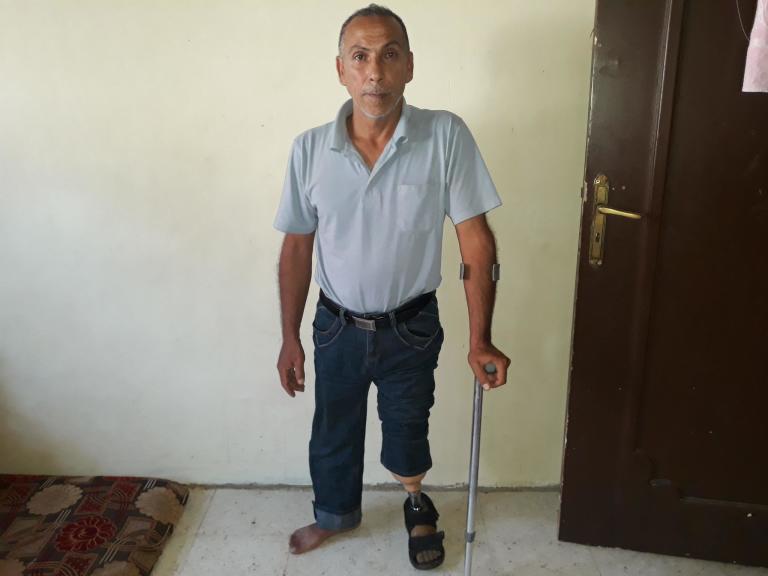 
Refugees with nothing left to lose

By Zaynab Mayladan Published 09. Sep 2020
Lebanon Housing, land and property (HLP) Information, counselling and legal assistance (ICLA) Syria crisis
Read caption Zayno, 48, fled from Syria in 2013 after losing his left leg in a missile strike outside his home. Photo: Khalid Wehbi/NRC
“When you have lost your leg, your home, your stability and certainty, nothing matters anymore. What else do you have to lose?” Refugees in Lebanon are struggling to cope with the deteriorating economic crisis, made worse by the pandemic. The Norwegian Refugee Council (NRC) is aiding the most vulnerable at this challenging time.

Zayno, 48, fled to Lebanon in 2013, along with his family, after losing his home and his left leg in an explosion that hit his neighbourhood in Homs, Syria. Today, he lives in a small apartment in north Lebanon together with ten other family members.

“Losing my leg was very hard but I knew we had bigger threats to worry about as the situation was deteriorating in Syria. I had to flee to ensure the safety of my family,” Zayno explains.

“In our beloved Syria, we had two apartments, a car and a small garden. The house was our family home. It had previously belonged to my parents and it was where I was born and raised. Imagine how difficult it was to leave everything behind,” says Zayno with a regretful smile on his face.

“Today, we only have our happy memories left. Life was much easier before the war in Syria. Now, we are so busy trying to make a living that we almost forget those precious moments once existed.”

“In Lebanon, I received a prosthesis to help me with my daily activities,” he continues. “Moving around or carrying groceries wasn’t a big challenge for me at first because I would use public transport all the time. However, with everything now becoming more expensive, I am forced to walk, which is very difficult. I have used my artificial limb so much that it has started to wear out. Sometimes when I try getting up in the morning, I fall down. I can’t afford buying a new one due to the crisis.”

“We have one less thing to worry about now”

Like thousands of other Syrian refugees in Lebanon, Zayno was not able to register the birth of his daughter and grandson. Syrian refugee children who are born in Lebanon but do not have complete birth certificates can face challenges in accessing basic services such as education and healthcare.

“We weren’t able to register their birth because at first we didn’t know how to, and then it turned out to be too expensive. This caused us a lot of stress and we lived with constant uncertainty,” Zayno explains.

NRC’s legal team supported Zayno to obtain birth certificates for his youngest daughter and grandson as well as to register the marriage of his daughter through funding from the UK’s Foreign, Commonwealth and Development Office (FCDO).

"NRC helped us in a way no one has before, I’m very grateful for the support we received. When I first got the birth certificates, I was very happy and felt relieved. It saved us time, money and work. We have one less thing to worry about now,” he says.

Together with specialised lawyers, our teams organise legal clinics focusing on the provision of tailored legal counselling. In order to overcome freedom of movement limitations, we use mobile legal clinics to facilitate refugees’ access to legal services.

Legal assistance and representation at administrative authorities and courts is offered to vulnerable refugees and complex cases.

The ICLA programme also aims to address the legal challenges faced by the Palestinian refugee community in Lebanon, through the provision of legal services focusing on civil documentation and housing and property rights.

During the outbreak of Covid-19 in Lebanon, our ICLA services have been implemented remotely wherever possible. Information and counselling provided by our staff and lawyers via phone has allowed NRC to maintain legal service delivery in response to refugees’ legal needs during these challenging times.

Zayno first encountered NRC three years ago, when he received support under the “Occupancy Free of Charge” programme, which provides secure rent-free housing for vulnerable refugees by renovating properties belonging to Lebanese owners. He then learned that NRC could also support him with legal services.

Lebanon is currently facing its worst socio-economic crisis in decades. The Covid-19 pandemic has exacerbated the already dire living situation for vulnerable Syrian and Lebanese communities all over the country. The Lebanese Lira (LPB) devaluated sharply over the past months and soaring prices of basic goods has made it very challenging for many families to cover their very basic needs.

“Just when we thought everything was going well, the situation in Lebanon deteriorated. The financial support we receive barely covers the rent and electricity bills. It’s even harder to afford basic products like rice and oil,” Zayno explains. “If it wasn’t for the cash assistance we receive, we would barely be able to cover our needs.”

“Our children haven’t had meat or fruit for months. It breaks my heart as a parent to know I can’t improve their living conditions or provide for their needs. I would sacrifice my life for them, but I can’t give them enough,” he adds.

Impact of Covid-19 on jobs and education

“We never expected things to get this bad. The economic crisis, along with the coronavirus outbreak, has left us without jobs. My 19-year-old son used to work as a concrete finisher for 10 to 12 hours a day, but now he doesn’t work and can’t provide for his wife and baby anymore,” Zayno explains.

Zayno’s three youngest children (aged 7, 12 and 16) have not been going to school since the pandemic began.

“My children’s education was the only positive thing that gave us a purpose in life,” says Zayno. “It gave me hope for their future.”

His two eldest children, Hamza and Dima, didn’t pursue their studies after fleeing to Lebanon. “I had big hopes for them when we were in Syria, and they even had their own private tutors. Unfortunately, their dreams were shattered because of the war and both had to marry at a young age.”

Zayno fears that his other daughters might end up in a similar situation as a consequence of the pandemic: “My daughters are losing their childhood, they do not enjoy it the way a child should. Before Covid-19, they used to play outside all the time, now they are trapped inside the house and they are bored all the time,”he says.

Although the provision of civil documentation gave Zayno some peace of mind, he still has many other things to worry about while living costs continue to increase. “We live in a small two-room apartment in Akkar. Our current housing conditions are not good, especially during winter when the ceiling leaks and our home floods with water,” he explains.

“The rent increases every now and then due to the financial situation and most of the times I borrow money because I can’t afford to pay it,” he says. “What will happen if I can’t pay the rent anymore?”

NRC intervenes with CDR activities in cases of housing disputes between refugee tenants and property owners to mitigate eviction threats and strengthen the security of tenure of refugee households. The CDR intervention is often the first line of response to an eviction threat and aims to assess the eviction case and inform the parties involved on their rights and responsibilities, including the need to follow due process of law for an eviction. CDR also offers a facilitated negotiation in order to postpone eviction deadlines, reschedule payment of arrears and draft new lease agreements.

CDR interventions have proven to be effective in reducing eviction risks in the short-term. However, due to the root causes of the eviction threat (lack of jobs and consequent inability to pay rent), this approach alone cannot replace a long-term final solution. Therefore, CDR should be paired with complementary assistance (cash assistance for example) to increase the ability of the tenants and owners to cope with the evolving situation and improve security of tenure.

CfR aims to support households’ financial means to secure rent and avoid evictions. We provide direct cash assistance to households or property owners in the form of monthly payments for at least three consecutive months. While during the Covid-19 outbreak, health-related vulnerabilities were crucial in the selection of households, CfR is also designed to support those facing individual protection risks, including gender-based violence and child labour.

Read more about eviction trends in Lebanon and NRC’s response

“Even if we would be evicted from this place, we have moved around so many times and we lost our house in Syria, so we are used to it. It’s our reality. I avoid building a connection with any place or people so I won’t get hurt later,” Zayno says. "All I hope for now is that my children can get an education and that their future will be better,” he concludes.