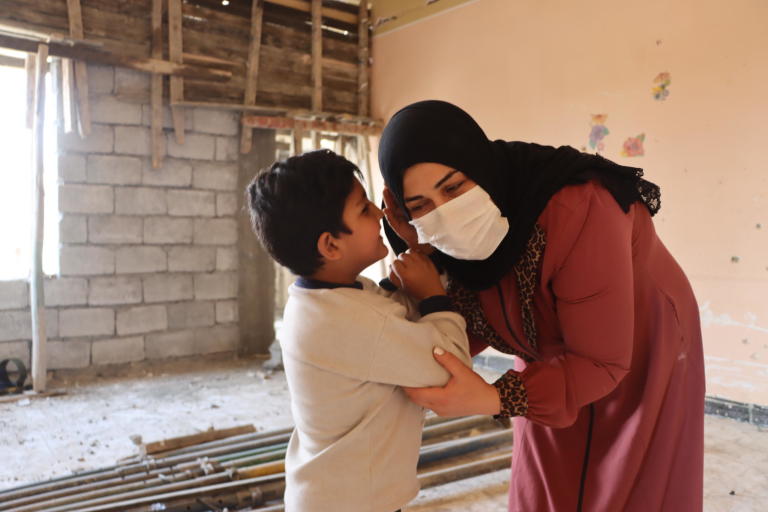 
Rebuilding on the ruins of her beloved house

After the chaos and upheaval of being forced to flee, Dijla, Samir and their children were finally able to return home. But the house they loved so much was in ruins.

“Now that we have received support from the Norwegian Refugee Council (NRC), we can start rebuilding our home. We are so grateful. I loved everything about our house. I have memories of every nook and cranny,” says Dijla.

This is her story.

“It was a shock! The back wall was gone, the kitchen ceiling had collapsed. The house had been blown to smithereens. It was horrible.

“Right now, we’re living with one of Samir’s brothers. But you never feel completely free when you are a long-term guest. Even our children get tired of it. We would love to give them a home.

“We don’t know why our house was bombed. But some say that IS group had taken it over. That they lived there and destroyed it before they left.”

“I loved that house. It was big, beautiful and had many rooms. There were 17 or 18 of us living there, all together.

“My father-in-law built the house in the early 2000s. He died at the same time as our city was liberated, around 2017, God be with him.

“The house was home to me, my husband, Samir and our four children: Younes, 15, Yousef, 13, Abdul-Salam, 8, and Abdul-Aziz, 7. Plus my parents-in-law, and two brothers-in-law and their families.

“IS group captured our city in 2014. Iraqi forces arrived to retake it in early September 2017.

“Then the bombing began.

“I was pregnant. It was hot. I tried to rest, and I fell asleep. The bombs! It felt like my stomach was exploding. I was in pain for the next three days before I gave birth to my daughter.

“IS group said it was forbidden to leave the city. But we didn’t listen to them. We left.

“We had to leave all our belongings behind. We hid our identity papers in our socks in case we were stopped.

“We walked for three hours, until we met Iraqi soldiers. They took us to the city of Kirkuk. I don’t envy anyone who has to live like we did for those first two months. In a house with 43 people. In a small room.

“You could hardly use the bathroom because of the stench. The food was bad. It made you sick.

“I had surgery there.

“It was cold, but we didn’t have any blankets. No extra clothes; just what we were wearing when we left. When you were hungry, there was no food. And if there was still a little to eat, it wasn’t so tempting – with dozens of people fighting for what little there was.

“My daughter died after three months.”

The devastation of war

“The war. It does harm in so many ways. We didn’t just lose our house. Because of it, Samir hasn’t seen his siblings in five years. I haven’t seen my brothers and sisters in three years.

“My nephew lost his eye from grenade splinters. Now he lives in the Netherlands.

“One of my sons can’t open his hand and needs surgery. It’s a congenital disease. And he is teased at school because of it. He says to Samir: ‘Dad, can you take me to the hospital so I can have surgery?’

“But we just can’t afford that right now.

“Today, my children go to school, but they are lagging behind because of the war. Younis, for example, suffers from anxiety. When he hears sounds, he thinks it’s bombs. He says: ‘Mum, I feel so scared, scared of everything.’ He is full of fear, and it affects his schoolwork. He used to be so good at school, especially in reading.

Vulnerable to the virus

“We have tried to protect ourselves against the coronavirus. We have stayed away from crowds. Kept our distance.

“To be honest, we have been very afraid that something might happen either to my mother, who has diabetes, high blood pressure and heart disease, or to our son Abdul-Aziz, who has allergies and asthma. He has difficulty breathing and needs oxygen.”

Still in need of help

“Samir and I often thought that we would never get our house back. That we got help to rebuild our home is wonderful.

“We have already started rebuilding. We have bought bricks, windows and doors.

“But the economic situation in Iraq is difficult, and prices have become very high. When Samir was going to buy a sack of cement, he didn’t have enough money. It turned out that it cost a fortune! He has had to go into debt with both family and friends. We need to finish the house before winter comes.

“We are so grateful for the support from NRC.

“Now we are asking for more help, so that our house can be finished before the cold sets in. I’m afraid my kids will freeze this winter.”

“I want to make our house beautiful again. Decorate it. Have furniture there eventually. Make a garden. It feels so good to take care of flowers in a garden.

“The room I loved the most was the kitchen. It’s where I made food with love. It’s where I served food to the people I love. I look forward to doing that again.

“From the bottom of my heart.”