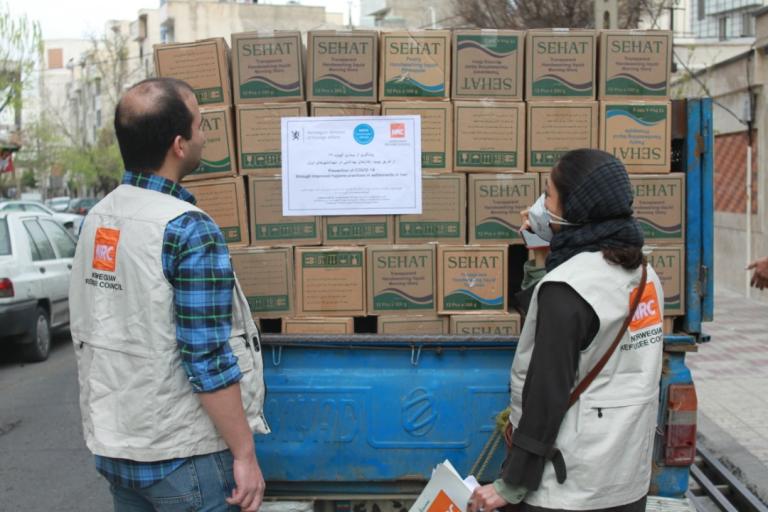 
NRC stepping up its work

Roald Høvring Published 18. Mar 2020
Global Water, sanitation and hygiene promotion (WASH) Coronavirus
Read caption IRAN: With support from the Norwegian government, NRC is providing thousands of soaps to Afghan families living in settlements in Iran to encourage hand washing, the most effective preventive measure for Covid-19. Distribution is paired with hygiene promotion messaging through different leaflets reinforcing key points provided by the Ministry of Health. Photo: Shahin Shadian / NRC
The Norwegian Refugee Council (NRC) is working around the clock to stop the coronavirus from spreading to vulnerable refugees and internally displaced people. The most important things now are to raise awareness and meet the need for information and sanitation.

We are concerned about the potential impact the global spread of coronavirus could have on vulnerable refugees and internally displaced people (IDPs) and are stepping up our effort to stop the virus spreading.

“Millions of people affected by conflict live in overcrowded refugee camps, where there are very poor hygiene and sanitation facilities. When the virus strikes against overpopulated settlements in countries such as Iran, Bangladesh, Afghanistan and Greece, the consequences will be brutal. We must act now,” says Jan Egeland, NRC Secretary General.

84 per cent of the world’s 70.8 million displaced people are being hosted by low or middle-income nations which have relatively weak health, water and sanitation systems. We also see that refugees and internally displaced people often find themselves living in places that are overcrowded and where health and other services are already overstretched or poorly resourced.

“Last week in Colombia and Venezuela I was able to see how our hard-working colleagues were providing safe water, much-needed latrines and sanitation, and great hygiene information to displaced and migrants under extreme conditions. Programmes like these are needed more than ever before,” says Egeland.

“We are now stepping up our work on sanitation and hygiene facilities, as well as dissemination of information, in Afghanistan and Iran. But stronger efforts are needed to ensure that the most vulnerable are protected. In Iran, we are deeply concerned about the millions of Afghan refugees living in areas with extremely poor hygiene facilities. While some Afghans are able to access public health care, some of them can only access primary health care. Support for this country must be significantly increased,” says Egeland.

Iran hosts between 3 and 3.5 million displaced Afghans. A million of these have de facto refugee status, but most are considered to be undocumented in the country. The government of Iran estimates that there are about 800,000 very vulnerable Afghans in need of assistance.

We are now stepping up our work on sanitation and hygiene facilities, as well as dissemination of information, in Afghanistan and Iran. But stronger efforts are needed to ensure that the most vulnerable are protected.
JAN EGELAND, NRC Secretary General

According to Iranian Ministry of Health: As of 17 March, 16,169 cases have been confirmed and 988 deaths recorded in Iran. The virus has spread throughout all Iranian provinces.

Will affect the most vulnerable

“We are concerned that the situation will severely affect the most vulnerable people in Iran, which includes refugees and displaced Afghans in the country, together with vulnerable Iranians. We are especially concerned about families with poor hygiene conditions and with underlying health conditions,” says Egeland.

In the fight against the coronavirus, NRC is distributing thousands of soaps and information leaflets to Afghan refugees living in settlements. As part of our regular activities, we have also delivered basic hygiene education messages to thousands of Iranian and Afghan children in schools, which was done just before the outbreak.

We have been active in this area for some time, and long before the coronavirus appeared. For example, in 2019 NRC Iran distributed more than 16,400 hygiene kits and over 2,500 kits containing water purifying tablets to refugees and people affected by natural disasters.

As of 15 March, Afghanistan has ten confirmed cases of people infected with coronavirus.

NRC is concerned about the possible spread of the virus amongst the already vulnerable internally displaced population. Strained resources, lack of access to basic services, and fears among the population, compounded with daily cross-movements between Iran and Afghanistan, increase the risk of infections in western Afghanistan.

The Humanitarian Response Plan for Afghanistan estimates that there are 9.4 million people in need in the country. The proposed response requires funding of USD 733 million. In the first three months of the year, only USD 6.9 million has been secured, which has predominantly been allocated to the food, water and sanitation sectors. As such, the health sector remains hugely underfunded.

"While the world's leaders are working to avoid a terror scenario within their own borders, they must not turn their backs on those living outside those borders. We must stand in international solidarity with people forced to flee through this very precarious period,” says Egeland. He continues:

“Flexibility from donor countries must be demonstrated so that humanitarian organisations can step up their work on water, sanitation and hygiene facilities, strengthen work to ensure people's health, and implement other necessary measures to avoid a disaster.”

While the world's leaders are working to avoid a terror scenario within their own borders, they must not turn their backs on those living outside those borders. We must stand in international solidarity with people forced to flee through this very precarious period.
JAN EGELAND, NRC Secretary General

NRC has ramped up its information dissemination and awareness-raising activities to inform families of the risks associated with the Covid-19 virus. We are present at critical border crossings.

NRC is also providing information in settlements where people displaced by conflict and drought are living. These sites are in Herat and Badghis provinces, western Afghanistan, where around 90,000 people are living in subpar conditions. Many lack access to basic services and hygiene items. Given that the general health condition of the displaced population is already fragile as a result of these conditions, a spread of the Covid-19 virus into these communities poses serious risks.

We urgently need more funding for pre-positioned hygiene kits. In Herat alone, even without considering the new arrivals from Iran, there are 4,000 families in need, with a further 1,350 in Badghis.

Support our work
Help people forced to flee from war and conflict
Select monthly amount
Choose amount
Choose amount
You can contribute anonymously, but please note that you will not get a receipt if the email field is left blank. If you fill in your email address or phone number, we will keep you informed about future humanitarian crises.
Our terms and conditions, including privacy policy statement
Support our work
Personal details:
Name
Surname
Select payment method