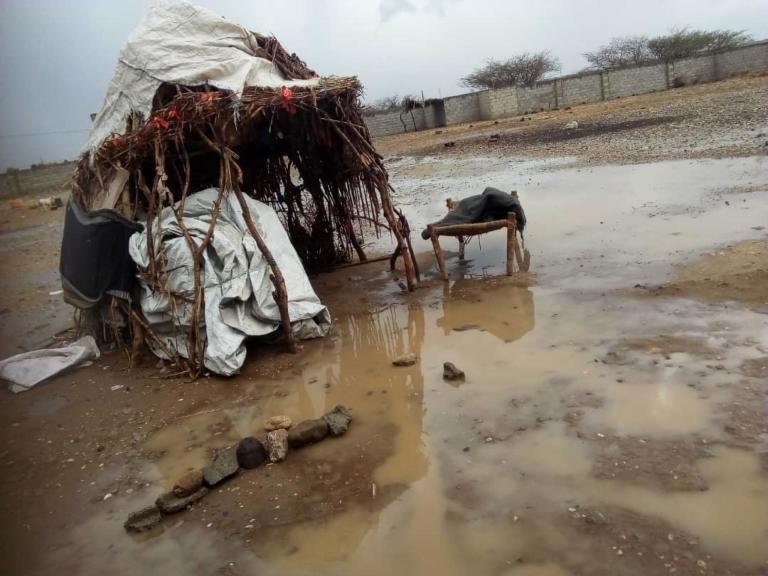 By: Nasser Abdulkareem and Riona McCormack Published 30. Apr 2020
Yemen Environment Internal displacement War and conflict
Read caption NRC is mobilising our teams to start distributing cash and hygiene kits to almost 1,000 families who have been affected by recent flooding. Photo: Anwar Abdu/NRC
Hamad Mohammed Abu Akua remembers a time when rainfall was good news. As a farmer from a small village in Haradh district, he eagerly awaited the April rainy season each year.

But on the morning of Friday 17 April, many miles from his village and the land he once farmed, Hamad heard the rain falling and knew it was not good news.

His wife was still preparing breakfast when their children hurried back inside, abandoning their games. Under the straw roof of their osha—a simple hut Hamad had built himself from straw—his family gathered and watched the rain. Having fled their home five years ago to seek safety in Abs district, they had only this fragile shelter to protect them.

“After an hour, the rainwater entered the osha heavily and our feet were covered,” Hamad recalls. In a panic, Hamad says, “we took our clothes and kitchen implements and fled to a neighbouring tent.”

After three hours of unrelenting rain, Hamad waded back to check on his osha. It had been destroyed.

Hamad was not alone. Over two days, more than 900 displaced families in Abs district lost almost everything.

The rain had started earlier that week. By Wednesday, reports had started to come in from across the country.

It was not just Abs. In Sana’a, Norwegian Refugee Council (NRC) staff member Fahed could not reach his home on Wednesday night because of rising floodwaters. The next morning, after the local council called him to report families in distress, the NRC team went out to see the damage for themselves.

What they found was heartbreaking. Mattresses and furniture were ruined; roofs had collapsed. Blankets – a hugely important item when clothes and reliable shelter are in short supply – were sodden and torn.

In both Sana’a and Abs, displaced families like Hamad’s were the most severely hit. Having fled from their homes to escape the conflict, most had been living in hastily built shelters, some made only of straw or tarpaulin.

Hamad had already lost everything once, when he fled his home village. In Abs, he had used what he could to create a new home. “Other displaced families provided me with straw, and I built my own osha,” he explained. Now it lay in ruins.

For Hamad, however, the worst blow was losing the food aid he had recently received. “I have been struggling to provide for my family,” he said. He does not know how they will replace that food.

A race against disease

The floods pose an added danger in Yemen for one very pressing reason: cholera.

Once largely eradicated, cholera has swept through the country in recent years. Yemen is now home to the worst outbreak in living memory. With sewage networks overwhelmed, water sources contaminated and waste flowing into the streets, the floods have created the perfect conditions for the spread of disease.

Another danger that thrives in unsanitary conditions is the coronavirus. So far, only one case has been confirmed in Yemen, but the country stands braced for the high possibility that it will spread.

“The rain used to be a good thing for me when I was a farmer, but nowadays it is a danger for displaced families, who don’t have houses to protect themselves.”

NRC has already mobilised teams to start cash distributions in Abs, to help almost 1,000 affected families replace food, blankets and other essential items. Other teams are focusing on Aden, Lahj, and Sana’a, where the floods have also struck hard, and will be distributing emergency hygiene kits and household items and helping to fix drains and latrines. Alongside this, we continue to run our water and sanitation assistance, which has been stepped up as part of preventative measures designed to reduce the spread of Covid-19.

Meanwhile, Hamad hopes his situation will not worsen. “The rainy season is only beginning,” he told us. Already, local authorities in Abs estimate that the number of flood-affected families has climbed to more than 2,000 and initial assessments suggest that 100,000 households have been affected countrywide. At least 15 people have died and 89 people have been left injured. Thousands have been displaced, with one city being declared a “disaster area”.

“The rain used to be a good thing for me when I was a farmer,” Hamad added, “but nowadays it is a danger for displaced families, who don’t have houses to protect themselves.”