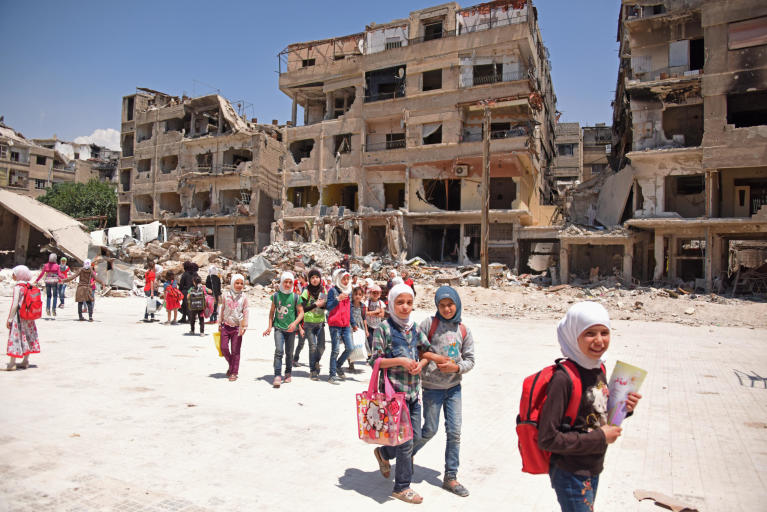 
Nine facts about nine years of war in Syria

Eirik Christophersen Published 13. Mar 2020
Syria Syria crisis
Read caption Children living in Harasta, Eastern Ghouta, flocked to school in 2018 to catch up on years of missed education after years of siege came to an end. This school housed 725 children, with parts of it completely destroyed and others badly damaged. Photo: Karl Schembri/NRC
The brutal conflict in Syria is entering its tenth year with disastrous consequences for millions of civilians. Here are nine of those consequences.

1: 2020 has seen the largest mass displacement in the history of the conflict

The latest escalation of violence in Idlib has displaced more than 960,000 people since December, half of whom are children. Many of these families have been displaced multiple times and are sheltering in overcrowded camps and congested cities.

2: Over six million Syrians have fled their homes and are displaced across Syria

At least 6.1 million Syrians live in limbo and are unable to return to their homes in other parts of Syria. Some have lost touch with friends or family, others have left behind their houses and property, many have lost everything. The majority of displaced Syrians lack the basic identity documents to move about freely and access basic services with ease.

3: Over half of Syria’s pre-war population requires humanitarian assistance

A total of 11.1 million Syrians in the country require food, water, shelter, healthcare and education, among other services. Around two thirds of these people now live in government-controlled areas, which several donor countries have been reluctant to scale up assistance for. Reaching the most vulnerable remains a challenge across the country due to security risks, bureaucratic restrictions and interference by various parties.

4: More than two million children are out of school

The Syria crisis has had a devastating impact on both the education opportunities available and the quality of these opportunities. It has left a generation of children and youth unprotected, disconnected and often unable to access their right to learn. NRC works with children who have lost as many as six years of learning, with some having forgotten how to read and write.

5: 40 per cent of schools have been damaged or destroyed

Schools across Syria have come under attack, been used for temporary shelters and got caught in the crossfire. After nine years of conflict, they are no longer a safe or joyful place for children to learn, hope and dream. This affects the entire community, including 180,000 teachers who no longer have a classroom from which to instruct.

6: A majority of Syrians live at risk of explosive hazards

Explosive hazards can be landmines, improvised explosive devices and unexploded ordnance. This is a major safety concern in areas that have witnessed violence, especially as people begin to return to these areas and rebuild their lives. Estimates suggest that 10 million people live in contaminated areas and are at risk.

In addition to the millions displaced within Syria, the neighbouring countries of Turkey, Lebanon, Iraq and Egypt have shown incredible generosity by hosting a total of 5.7 million refugees. Donors must continue to support neighbouring countries so that refugees can continue living in safety and dignity, with their most basic needs such as food, water, shelter, health care and education covered. An additional one million Syrians are refugees outside the region.

8: 70 per cent of Syrian refugees live below the poverty line

This means that families must make difficult choices every day to cope. Most are in debt; many are vulnerable to exploitation and children have had to drop out of school and work instead. One in three Syrian boys aged 15 to 17 are engaged in child labour in Lebanon.

9: Nine years on, Syria is still unsafe for many to return

Despite various attempts over the years to secure an end to the violence, conflict is still raging in parts of Syria. Conditions in the country are not yet conducive for refugees to return from abroad. Safety risks, crippling poverty and the absence of basic services must be overcome before their return can be durable.