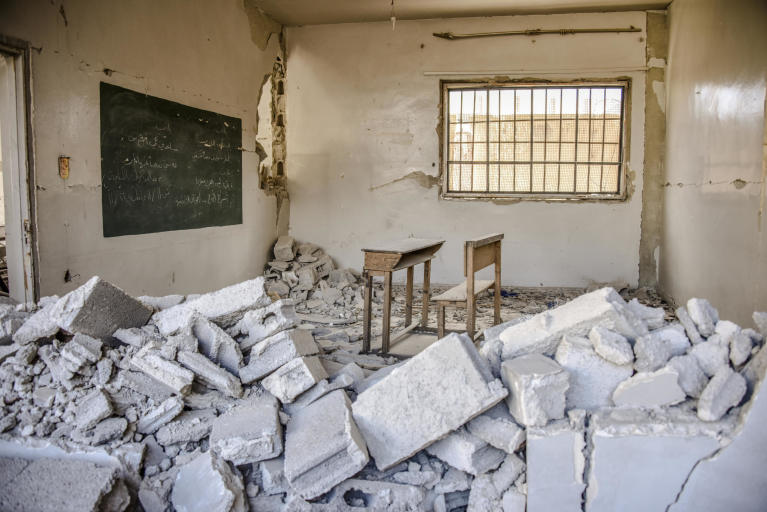 By Rebecca Crombleholme Published 22. Aug 2020
Syria Syria crisis Youth
Read caption The damage to schools has devastated the educational experience of millions of young people across Syria.
It can be tough being a young person. Trying to figure out what you want to do in life, which path to take, and how to make it all happen.

It’s even tougher in a war zone. For over nine years, violence and displacement have devastated opportunities for youth across the country. Today’s young people were children when the conflict broke out. They have had to drop out of school, flee their hometowns, and witness traumatic events. Planning for the future is challenging, if not impossible.

Here are nine of the most pressing challenges facing young people in Syria today.

School buildings across Syria have not been shielded from the conflict. Many classrooms have been severely damaged and, in some cases, only rubble remains. The buildings which remain are often used for other purposes, such as shelters for displaced people.

In addition, school staff have often been forced to flee themselves, and there is now a significant lack of qualified teachers. This makes it difficult for children and young people to access education or learn in an effective way. It has devastated the educational experience of millions of young people across Syria.

Many young people in Syria, including those who have been displaced, lack the required documentation required to prove their educational achievements and to re-enrol at the appropriate level. A significant proportion have had to change curriculum during the conflict, and their previous studies are often not recognised in their new location.

Even for students who have stayed within the same governorate or city suffer from changing curricula as lines of control shifted. Checkpoints regularly inhibit students from continuing their education or attending exams safely.

In areas where school buildings remain standing and the students have access to appropriate documentation, the cost of schooling is still a barrier. Families are often unable to afford school fees, uniforms or travel costs.

4. Young people having to work

The instability the Syrian people have felt over nine years of protracted conflict has led to crippling levels of poverty, only further exacerbated by the recent economic crisis. According to the United Nations, over 90 per cent of the population in Syria lives below the poverty line.

This has forced many children and young people to drop out of education to assume adult responsibilities. They are compelled to work to help feed their families.

In conflict settings where poverty rates are high, child marriage tends to increase. It is often a desperate response to extreme circumstances.

Prior to the conflict, child marriage existed in Syria, but to a much lesser degree. According to Girls Not Brides, 13 per cent of Syrian women aged 20 to 25 were married before the age of 18. New research by World Vision International revealed an alarming increase in child marriage; adolescent girls and boys as well as their families note that child marriage has become more common since the start of the conflict as families face added vulnerabilities brought by instability and economic hardship.

Witnessing prolonged conflict can have significant consequences for mental health. Many young people in Syria suffer from the trauma of war, experiencing nightmares and struggling to focus in school.

The period of late adolescence and early adulthood is a key stage for developing important life skills such as critical thinking, problem-solving and socialisation. Having to deal with trauma and insecurity at this crucial stage can cause significant psychological stress that affects young people’s development.

Young men in Syria face the prospect of mandatory military conscription, which if avoided, can affect their ability to move freely in the country. Some drop out of education and miss work opportunities.

When young people are unable to complete their education, their future employment options and earning potential are compromised. Fifty-five per cent of the working population in Syria is unemployed, and youth unemployment is even higher. Female youth are suffering the highest rate of unemployment, with 84 per cent of girls aged 15 - 24 unemployed, according to The World Bank.

Young people in Syria dream of a brighter future for themselves and their country. They have the commitment and drive to make this happen, but the barriers can often seem insurmountable. As many await peace to return to Syria, it is impossible to set goals for the future. In these circumstances, all hope can be lost.

The young people of Syria need and want pathways that provide them with the knowledge, skills, and support required to build a new future. These pathways should help them prepare for the decades to come when they can stop focusing on day-to-day survival and start working towards fulfilling their hopes and dreams.