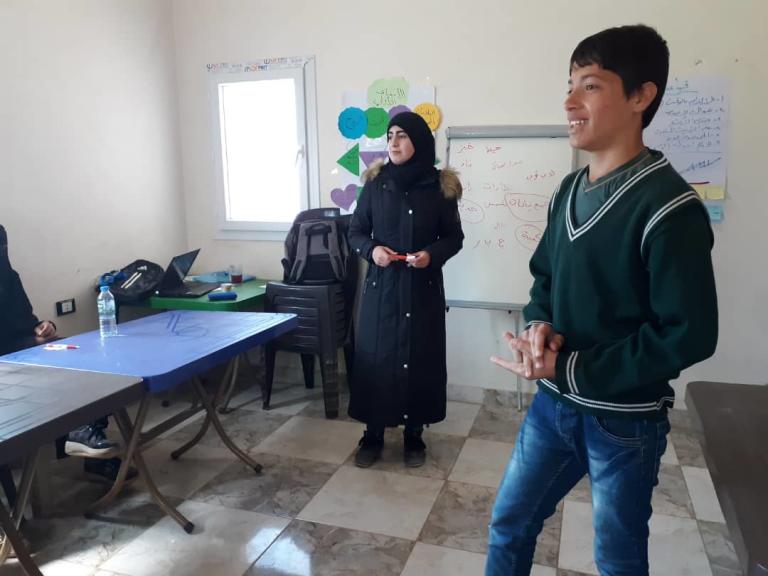 
"My school was bombed"

When the conflict in Syria engulfed her community many years ago, the streets were so unsafe that her school closed and her family was forced to flee.

Yara settled in a new neighbourhood and hoped that she’d be able to pick up school where she’d left off, but this was unfortunately not the case.

“There were no services,” she recalls. “It was very hard to go to school considering that there was no school nearby and the streets weren’t safe. I spent a whole year with no education.”

Life in the new neighbourhood was not easy. Yara continues:

“Due to the conflict, [the neighbourhood] suffered from a lack of electricity and water, even food. The people there found limited alternatives. They used generators to supply two to three amps for each house for a few hours a day, which was very expensive. For water, they dug out wells in the streets where they had to drink salty water. Not to mention the lack of food and the high prices.”

A glimmer of hope

It was under these conditions that a school for girls was opened accommodating grades nine to 12. Perfect for Yara.

“I completed grade nine, trying to catch up after one year out of school,” she explains. “During grade 10 … the shelling over the civilian areas increased.

“My school was bombed, and several students were injured. The school closed. I was forced to go to school … three kilometres from my house. The school was in a basement and we suffered from a lack of qualified teachers.

“One of the teachers did not have a college degree and one of them was a pharmacist. There was a lack of textbooks due to the siege. The route to school was not safe. Most of my classmates dropped out of school because of the bombardment. In the end, I didn’t finish Grade 12 because the road closed, and some teachers got injured.”

As the siege and clashes intensified, Yara left the city with her family, leaving everything behind yet again. They moved to a camp for internally displaced people. There was a school in a neighbouring village where Yara tried again to complete her formal education.

“It was a long way to the school across fields,” she recalls. “I used to come back to the camp at night. The people of the village and the camp didn’t like the idea of girls leaving during the night and they talked bad about the ones who did and harassed me."

“The students and the teachers of the schools also looked down on me for being a displaced person."
Yara

“The students and the teachers of the schools also looked down on me for being a displaced person. In the end, the camp became overcrowded and we were forced out. We moved to the village where my school was.”

The discrimination that Yara faced in this school became too much. “I decided to leave school for work because of the harassment in the school and the mockery of teachers towards displaced people like me,“ she says. “The students of the village aren’t at risk of losing their right to education and they don’t care much about the lessons. The teachers notice that, which makes them even more aggressive towards the displaced students. They started treating me like I wasn’t there, despite my interest in education.”

Yara is now working at a hairdresser in the village with her younger brother. “The people in this village have a good life and don’t think of others who are suffering in [my old city]. They are living in paradise compared to us.”

She is also working for a Syrian humanitarian organisation and facilitates first aid training. She provides counselling sessions to students who have left school and encourages them to continue learning.

Today, Yara’s own educational future is uncertain. Like countless internally displaced youth, she has lost the documentation attesting to the formal education she has completed. The changes of curricula in the different locations where she attended school also make it hard for her to prove her attainments.

Children and young people in Syria face enormous barriers to education. Read more in our new “24 under 24 report” on the challenges they face.