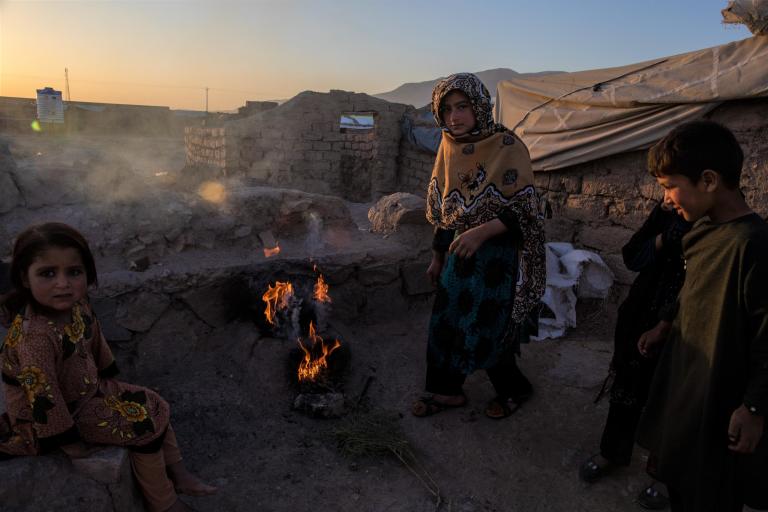 
“Many will starve to death this winter”

Published 26. Nov 2020
Afghanistan Livelihoods and food security Humanitarian financing Coronavirus
Read caption Children huddle around a campfire for warmth in a settlement for displaced people near Herat. Photo: Enayatullah Azad/NRC
As the Government of Afghanistan and the international community came together this week in Geneva, displaced people, returnees and host communities in Afghanistan are at risk of being left further behind. At the same time, Covid-19 is back with full force.

Eight months since the first cases of Covid-19 were reported in western Afghanistan, it has been estimated that one-third of the population has been infected.

The impact of the pandemic has left families and communities struggling to cope. As a second wave looks set to hit, along with the arrival of a bitter winter amid increased conflict and political uncertainty, displaced people fear that what did not kill them the first time around will come back with a vengeance.

The Norwegian Refugee Council (NRC) works to support refugees and displaced people in over 30 countries around the world, including Afghanistan. Support our work today

“During the Covid-19 pandemic, I was working for 70 afghanis per day (equivalent to USD 1) while a daily wage is typically between 400–1,000 afghanis per day. There is always something lacking at home. When we have rice, there is no cooking oil; and when we have oil, then the wheat flour gets short,” Mohammad Asa, an internally displaced person in Herat tells us.

He and other parents have had to take on debt, cut meals and medical expenses, and make impossible decisions like sending their children away to work or forcing girls into early marriage to earn a dowry.

Almost the entire population is missing out on a social safety net, and 14 million people are in humanitarian need. Yet, nearly 11 months into the year, the Humanitarian Response Plan (an UN-led plan involving several humanitarian organisations) is less than half funded.

When we have rice, there is no cooking oil; and when we have oil, then the wheat flour gets short
Mohammad Asa, internally displaced person in Herat

Humanitarians fear that the situation will get even worse next year as the security situation worsens and the impacts of the Covid-19 pandemic, including spiralling food insecurity and catastrophic debt, continue to mount.

Despite the pandemic, conflict continues to rage across the country, preventing people from being able to return home.

“It is a miserable life and every moment is torture for us. When there is peace in the country, I will not stay here for a minute longer, but return to my village,” says Jumma Khan, 56. He is a community leader in Shahrak-e-Sabz, the largest settlement for internally displaced people in western Afghanistan, with 14,500 households.

At another site for drought and conflict-affected families less than a kilometre away, Mullah Mohammad Ayub, 42, follows the situation in his hometown closely through the radio. He hopes that he and his family can return one day and he can restart his livelihood.

“When there wasn’t any worrying news about my district, I went to see if I could go back home with my family. I spent only one night there. There was fighting still going on, and I was in danger of being killed. The security situation is volatile everywhere in the country.”

At risk of being left behind

Yet as the Government of Afghanistan and the international community committed to common objectives for sustainable development, prosperity and peace in Afghanistan, they pledged less money than four years ago despite skyrocketing needs. As a result, internally displaced people feel left behind.

“We have no income here, and it has been 18 months since we received any assistance like food or cash,” explains Mohammad Amin*, 24, a community leader in the Shahrak-e-Sabz settlement.

“People are starving here. Covid-19 did not kill the displaced population, but this time it will. They are weaker than they were six months ago, and many will starve to death this winter.”

Read more about our work in Afghanistan

*Name has been changed to protect the person’s identity