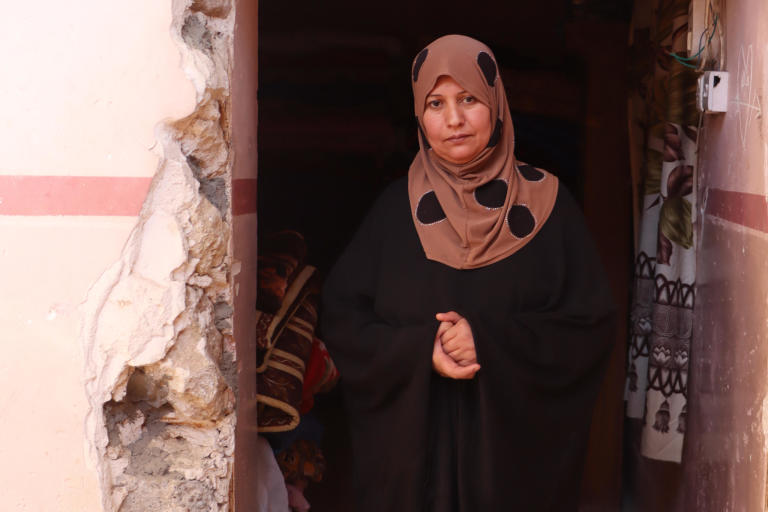 
Living in the enemy’s house

Islamic State group controlled her city. People were being killed. Bodies were being thrown into the streets.

“I saw it with my own eyes. It was a dark time. After two years, we finally manage to get away,” says Nidal, who thus became homeless. Now, she and her family have ended up living in an “IS house”.

In the summer of 2014, Iraq’s second largest city, Mosul, and the surrounding areas were occupied by the armed group Islamic State (IS). The population lived under a regime of fear, threats, oppression and murder.

“IS group took my uncle, aunt and cousin. Nobody knows what happened to them,” says Nidal.

Nidal’s hometown is about a 15-minute drive from Mosul. She grew up under difficult conditions. Her dream was to finish school, but her family couldn’t afford it.

“When I became a mother myself, I swore that my children would have the chance to go to school and get a good education. That’s my life dream. I’m willing to sell everything I own to make it happen.”

They left everything they owned

Under the IS group regime, hunger was rampant. For two years, until Iraqi forces were able to rescue people from the area in 2016, Nidal, her husband Fathil and their children Khalid, 17, Rana, 9, and Rasha, 8, had to do their best with very little food.

In the autumn of 2016, the Iraqi government announced the start of an offensive to retake Mosul. A multi-national coalition of military forces provided support to Iraqi and Kurdish soldiers deployed in the fighting.

Like their neighbours, Nidal and her family closed the door to their home for the very last time. Crying, they left their house and everything they owned.

Homeless, they faced an uncertain future.

“My biggest fear is that IS group will return. They’re still out there. But we trust that Iraqi forces will protect us,” says Nidal and continues:

“The terrible events we have witnessed have taken a psychological toll. The images of terror keep coming back. When I go to bed, I lie there and worry about where we are going to live. I want a permanent home. A home that has what we need.

“It is a miracle that we have survived this war.

“The Iraqi soldiers took us to a refugee camp for internally displaced people. It was like getting our life back. As if I had been saved from dying. The Norwegian Refugee Council and other organisations had prepared for our arrival. They helped us. After lacking so many things for so long, we finally had food, water and blankets. Finally, we had a safe place to sleep. We could rest.

“We lived there for almost three years.”

Life in the camp

Nidal says that the camp grew larger over time, as more and more people arrived. The help that the aid organisations had to offer then had to be distributed to more people. Consequently, there was less to go around.

Life in the camp was not so easy in the long run. Nidal and her family had to walk a long way to fetch water. There were also rules she had to follow; she couldn’t just come and go as she pleased.

“The worst thing was that my children had to walk so far to get to school. In addition, the education available was limited. There was nothing for my eldest son. As I see it, school is the most important thing of all. School is the future.

“So we decided to leave.”

But where could they live? They had no money. Nidal’s husband, Fathil, took on as many odd jobs as he could. But the little he earned was at best only enough to buy food from day to day.

They found an empty house. The house was located near a school. The neighbours said: “IS people lived here. The house is going to be demolished. You can stay here until then.”

So, they moved into an “IS house”.

“We need a place of our own”

“We have lived here for a year now,” explains Nidal. “Our two youngest children go to the nearby school. Our oldest son lives with relatives and goes to upper secondary school.

“I don’t want to stay here.

“This is not a good house to live in. The rooms are hot in the summer and cold in the winter. We try to keep the cold out by covering the windows with blankets. We have a mat on the floor.

“There are many places where the water leaks in. The rooms are damp. We don’t have a cupboard or chest of drawers to store our clothes in – so they are also damp. The fridge is broken. We have no washing machine, and I have a bad back and shouldn’t wash clothes by hand.

“When we moved in, the house was very dirty, and it was a big job to get it clean. In recent months, I have been disinfecting inside to keep the coronavirus out. I thank God that none of us have been infected.

“This house lacks everything. On top of all that, we have no idea when it will be demolished.

“What we need most is a place of our own. A place that feels like home.