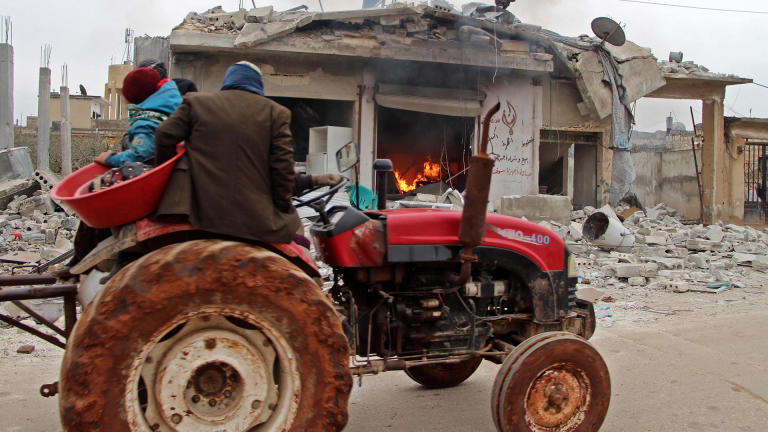 
"I lost my whole world"

Racha El Daoi Published 28. Feb 2020
Lebanon Syria Syria crisis War and conflict
Read caption Members of a Syrian family fleeing a town in the province of Idlib. Photo: Ibrahim YASOUF / AFP) / NTB Scanpix**
“No one can imagine what I’m going through, I sent my wife and daughter back to the war. They are on a bus on their way to Idlib”, says 37-year-old Ahmad*, with tears in his eyes.

In recent weeks Idlib has become a place of fear. Civilian infrastructure has come under fire. The area, which has until recently been a place of refuge for many displaced people, is seeing hundreds of thousands rushing to escape. When we met Ahmad, his beloved wife and only child were heading towards the conflict.

Under desperate living conditions Ahmad had to make a decision that no father should have to make. Should his family stay in Lebanon without food or security, or journey back into a war zone?

Ahmad and his wife, Fatima*, fled the war in Syria in 2014 when the situation deteriorated in the outskirts of Damascus where they lived. After losing several family members they fled to Lebanon to settle in Zahle, in the Bekaa Valley. But as the economic and political crisis began to unfold at the end of 2019, life in Lebanon became extremely difficult.

“The living conditions in Lebanon have become unbearable over the past six months. I haven’t been able to find a job. Without work, I couldn’t provide for my family anymore. I haven’t been able to pay my rent for the past three months and the landlord needs her money,” Ahmad says. “She told us to leave. I didn’t want my family to end up on the street so we organised for them to return to Syria.”

"I didn’t want my family to end up on the street so we organised for them to return to Syria.”

In mid-2019, the Lebanese Ministry of Labour reinforced its efforts to reduce informal employment in the country. This resulted in labour inspections and the closure of small businesses employing irregular foreign workers. For Syrian refugees without legal residency, it became almost impossible to find a job and provide for their families.

In addition, since October 2019 Lebanon has witnessed widespread protests against corruption, the lack of adequate services and the deteriorating living conditions. Lebanese society is facing its worst socio-economic crisis in years with a currency sharply devaluing and the cost of products and services significantly increasing. This has impacted greatly on both refugee communities and the Lebanese host population who are also struggling to make ends meet.

“Before the protest some type of daily work was still available. Even if it was badly paid it was better than nothing. Nowadays, I can’t find work anywhere. I don’t want to live off charity, I want a job so I can earn my own income,” Ahmad explains. “I would accept any job just to be able to pay my rent and buy food.”

“I sent my soul to the danger in Syria because I couldn’t afford to feed her.”

Ahmad and Fatima were among the 55 per cent of Syrian refugees living below the severe poverty line of spending less than USD 2.9 per day. This meant that they were unable to meet their basic survival needs of food, health and shelter.

“The past few weeks were hell on earth for me and Fatima. We didn’t have enough money to buy food. We split a piece of bread between us over two days so we could give our daughter, Maya*, a whole piece,” he explains.

“Fatima lost a lot of weight, but our priority was Maya. We reached rock bottom, but we didn’t want our daughter to know what we were going through. I didn’t want her to see me humiliated as a father unable to take care of them”, says Ahmad.

“I sent my soul to the danger in Syria because I couldn’t afford to feed her.”

“Maya is my light and soul. My wife and I were married for eight years before we were blessed with a child,” he explains. “She is the joy of my life. I don’t know what I will do with myself if something happens to them. My life wouldn’t be worth living without them.”

“I didn’t have any other choice than to send my family back to Syria. I thought it would be better for them there. In Syria your neighbours will knock on your door and help you if you need support but in Lebanon we are alone.”

But the return of Ahmad’s wife and daughter hasn’t gone as planned. “My family was supposed to go to my mother and siblings in Ghouta, not to Idlib,” says a devastated Ahmad.

On 28 January, Fatima and four-year-old Maya returned to Syria. They travelled to Ghouta as planned but were not allowed to enter because they could not present any formal link with the town and were asked for additional documentation.

With nowhere else to go, his wife and child spent the night with a distant relative. But the next day they had to leave.

“Fatima has an uncle who lives in Idlib and has agreed to host them. She had no other choice than to go to Idlib. Knowing that it’s very dangerous there now, it was the hardest decision we had to make,” Ahmad explains.

“Imagine people are fleeing the violence in Idlib and my family is going towards what they are running from.”

Ahmad himself couldn’t return with them because of security reasons and the current political situation in Syria.

Life without his family

The Norwegian Refugee Council, with the support of European Civil Protection and Humanitarian Aid Operations (ECHO), helped Ahmad obtain a birth registration for his daughter before she returned to Syria.

“I haven’t eaten for several days. I can’t afford it. I bought a pack of noodles but I can’t boil it because I don’t have gas for the stove. Maya used to eat noodles,” he says remembering his daughter.

“She left me her teddy bear and a few pieces of Lego and told me to remember her when she is not around,” Ahmad says, bursting into tears. “I have lost my whole world.”

In Syria, Ahmad says he lived a good life. He worked as a blacksmith and was pursuing his law studies at the university. He dreamt of becoming a judge. “I miss home but Syria and Damascus are a distant dream for me today. Returning is just a dream,” he concludes.

“All I want now is for my wife and daughter to come back to my arms. I want to hug my daughter again.”

**This photo has been used for illustrative purposes. The people in the photo are not those mentioned in the article.