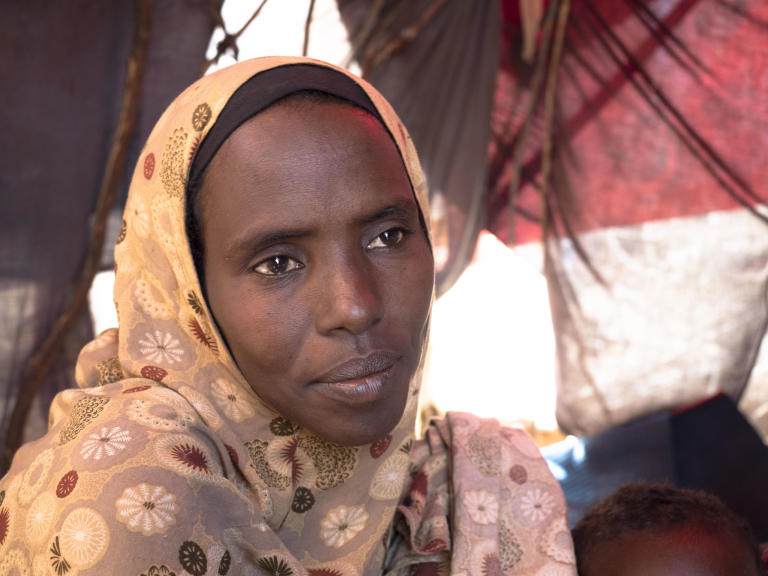 
“I left to save my children”

By Eirik Christophersen Published 05. May 2020
Somalia Climate change Environment War and conflict
Read caption Faduma has lost both her father and her husband. They were both killed in the armed conflict which has ravaged Somalia for many years. Photo: Ingrid Prestetun/NRC
Faduma Abdinor Mohamed, 39, lost both her father and husband when they were killed in the armed conflict in Somalia. But it was the three years of recurrent drought that eventually drove her to leave her home.

We meet Faduma in Goomir, a camp for internally displaced people just outside of the city of Baidoa, in southern Somalia. Faduma built the house they live in using branches and scraps of fabric. On her lap is her youngest daughter, two-year-old Ikhalas, who has a nasty burn on one foot from stepping in the fire while Faduma was cooking. Faduma is treating the wound with local herbs because they cannot afford to go to a doctor.

Four years ago, Faduma's father was shot and killed by armed groups. Then the following year, her husband was also killed, accidently, by armed groups, when he was herding his animals. At that time, Faduma was pregnant with Ikhalas.

As Faduma’s family did not own any land, she worked for other farmers to support her six children. She owned a herd of goats, which were an important asset and provided a means for the family to access food.

In 2017, Somalia was hit with a severe drought. Like millions of Somalis, Faduma lost a lot of her livestock and only four of her goats survived the harsh conditions. Then, when her son became seriously ill, Faduma had to sell her remaining goats to cover the cost of medicine.

Climate change in the Horn of Africa has led to more frequent and prolonged droughts in recent years. 2019 arrived with little rainfall and many ruined crops. When it was no longer possible to farm the land, Faduma was unable to support her family and was forced to make the decision to leave for Baidoa.

Somalia is a dangerous and demanding country for humanitarian workers. Faduma lived in one of many areas where conflict makes it impossible for the Norwegian Refugee Council (NRC) and other aid organisations to provide emergency assistance. Because of this, many people are relocating to areas nearer to towns and cities to get support.

In 2019, 188,000 people were displaced from their homes to other locations in Somalia because of conflict, while 479,000 were displaced because of disasters like drought and flooding, according a new report by the Internal Displacement Monitoring Centre.

South West State is among the areas that are most vulnerable to the impact of climatic shocks, and Baidoa is the second largest hub of settlements for internally displaced people in the country. As of April 2020, the city hosts 330,000 displaced people across 483 settlements, many people having arrived owing to the impact of recurrent drought and conflict. With the onset of the “Gu rains” (Somalia’s annual rainfall) in April 2020, more than 80,000 people were affected by flooding and displaced within Baidoa. The humanitarian needs are enormous and aid organisations are trying to support as many as possible with limited resources.

NRC delivers clean water to the camp where Faduma lives. In other camps, NRC has also provided financial support to new arrivals so they can construct shelters, buy food and otherwise meet their basic needs. Unfortunately, because of the large number of internally displaced people coming to Baidoa each week, resources are becoming more scarce and the money is not enough to cover everyone’s needs.

Wants her children to be safe

Faduma says she struggles to provide enough food for her children, especially because she does not have a husband who can help support them.

“We have a lot of problems and no family to support us. Last night we got a little food from someone else who lives in the camp, but today my kids haven't eaten anything. I had nothing to cook with,” she said.

Still, Faduma does not regret her decision to leave. She does not want her children to grow up with the same violence and conflict that she lived with for many years.

“In Somalia, we have an expression that goes: ‘A snake looks like the environment it lives in.’ Children adapt to their environment. I want my children to go to school and have the opportunity of a different life to the one I had. That's why we came here,” she says.

Somalia is a country the same size as France with the longest coastline in mainland Africa (3,333km). This exposes the country to multiple, recurrent and sometimes simultaneous climatic shocks. Since late April 2020, parts of the country have been hit with heavy rains and severe flooding, causing at least eight deaths, destroying infrastructure and homes, and displacing thousands of people during a period in which they most require stability and access to safe shelter and clean water.

As of 2 May, Somalia has 671 confirmed cases of coronavirus, double the number of the previous week. It is suspected that there are many unconfirmed cases across the country, including fatalities. Against this backdrop, millions of people in Somalia continue to struggle with the impact of recurrent drought. Many have been displaced by it and many will continue to be displaced through the current crisis.

Our work in Baidoa:

The numbers are likely to increase as our response to Covid-19 progresses.