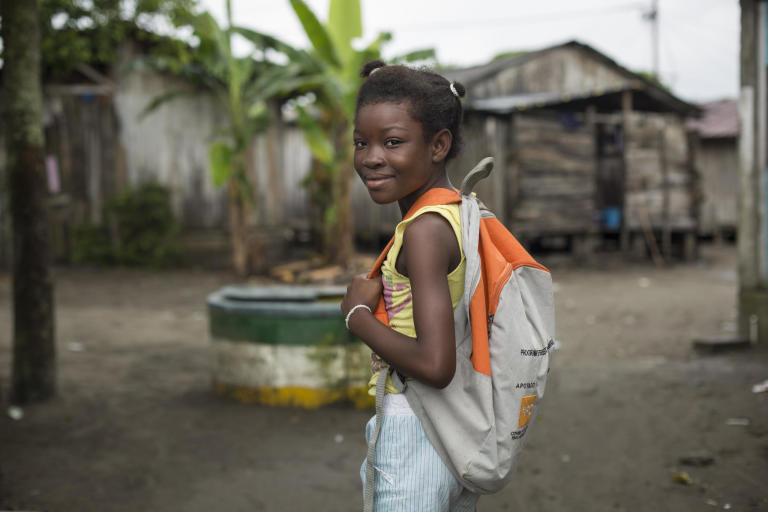 
I dream of becoming a doctor

Published 24. Jan 2020
Colombia Education War and conflict
Read caption Wendy, 9, lives in a remote part of Colombia which is becoming increasingly dangerous for civilians. She dreams that one day she will become a doctor so that she can help others. Photo: Fernanda Pineda/NRC
Landmines on the route to school. Armed occupation of the classroom. Getting caught in the middle of crossfire. This is the situation affecting thousands of school children in Colombia. But this does not stop children like Wendy from dreaming of a bright future.

Wendy lives in a remote part of Colombia. For the first nine years of her life, she never had the chance of going to school.

Wendy’s family is one of thousands who have suffered from the internal armed conflict in Colombia. Her mother, Diana, was faced with a tough decision: to remain in their home and put her family’s lives at risk, or to flee and start again.

“I used to live in a dangerous area,” Diana recalls. “In the past, while going for a walk, you could feel blood splattered on your clothes.”

Diana took the decision to flee, and the family had to start their lives again. It meant that Wendy and her three siblings were unable to attend school.

Foundations for a bright future

Diana was never able to study herself. But she knows that education is a great privilege that can lead anywhere.

One year ago, Wendy had to opportunity to go to school for the first time. Her eyes filled with happiness and excitement.

“The school is beautiful” she said. “It has classrooms, a person who prepares food, and teachers!”

Education is a fundamental human right for all children and youth. Displacement has a devastating impact on learning, and often leads to an education being denied or interrupted.

Armed groups are an increasing presence in the region where Wendy’s family now lives. Community leaders have been murdered. Shootings and mortar fire have become a part of her life. But she knows that education is the key to changing her life. She hopes that someday her dreams will come true and she will be a doctor. That way, she can help change the lives of others too.

Colombia’s six-decade-long armed conflict continues to force hundreds of thousands of people to flee their homes. The country has the second largest internally displaced population in the world after Syria. More than five million people depend on humanitarian aid.

Between January and August 2019, more than 10,800 children and about 650 teachers were affected by situations that endangered their lives and limited their education, according to monitoring carried out by the Norwegian Refugee Council (NRC).

“Serious violations of education can have a devastating effect on the future of children. The Colombian government must guarantee education and give hope to children and young people in every corner of the country.”

Helping children get back to school

NRC has been active in Colombia since 1991. We help displaced families keep their children in school, and work with youth and adults so they can complete their education and find safe vocational training opportunities.

We also train teachers so that they can best teach and support their pupils during an emergency.

We encourage the Colombian government to adhere to the Declaration of Safe Schools and ensure that education is protected, and that strict measures are taken against those who violate its principles.

“The reactivation of the conflict requires the government to adopt new measures that guarantee the right to education. When schools are attacked and roads are mined, the sense of security vanishes in the territories”, says Duveiller.

Read more about our work in Colombia