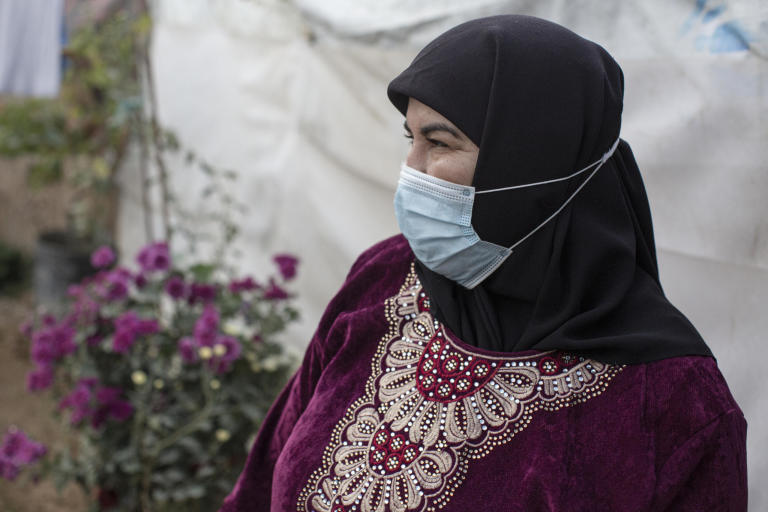 
How Fatima transformed her tent into a family home

Rebecca Crombleholme and Sam Tarling Published 12. Dec 2020
Lebanon Shelter and settlements Syria crisis Campaign
Read caption Fatima refuses to let living in a tent dampen her family’s spirits. Photo: Sam Tarling/NRC
If anyone can make a shelter into a home, it’s Fatima Toumas. Despite missing her original home in Syria deeply, she does everything she can to bring colour and warmth into the tent her family shares.

From the outside, her modest tent looks like every other makeshift dwelling in the informal settlements that dot Lebanon’s Bekaa Valley. This upland area of eastern Lebanon is home to hundreds of thousands of Syrians who have fled the war in their home country and crossed over the border.

A simple gate of corrugated tin opens onto a courtyard, planted with flowers and herbs. Washing hangs on a line. The family’s tent, like so many others, is clad in a discarded advertising banner and weighted down with old tyres to protect against the impending winter storms.

Inside, however, it’s a different story.

Back in Syria, working with fabrics was just a hobby for Fatima. Now, her skills have enabled the mother of five (and grandmother of one) to use what other people have cast aside to improve her home.

Her first success came when she saw some children carrying an old blanket to throw away. “I bought it from them for 500 liras, which is nothing,” she says, proudly. With this, Fatima was able to stitch new covers for the foam mattresses that the family sit on during the day and sleep on at night.

The covers were a success and Fatima began to look for new outlets for her creativity. She found material to cover another set of cushions and even transformed some discarded yoghurt pots into unique plant pots.

“When I’m feeling down, I start sewing and embroidering because it makes me happy,” says Fatima. “Depression will kill us. I don’t like seeing it everywhere.

“I want to change things so that if I look around, I don’t think ‘this wall is very depressing’. This plant pot, for example: it’s very simple, but when I look at it, I feel happier.”

A long road to safety

It’s been a long road for Fatima and her family to reach this point. Forced to flee their home in Syria in 2013, they first went to Arsal, a dusty border town on Lebanon’s easternmost tip. Here, they shared a small cotton tent with another family.

The conditions were harsh, and her son, who was only two at the time, became very sick. “He was between life and death because we were living on the bare ground,” Fatima recalls. “When the winter rains came, the tent would flood. I used to cover my son with my body just to keep him warm. He kept saying he was feeling cold, but we didn’t have any blankets.”

Few people would look at the tarpaulin-covered hut that Fatima’s family now call home and see luxury. But after three years of struggling to survive in a flimsy tent, when Fatima first set eyes on it, she was overwhelmed.

“When I saw it, I thought it was huge! It was only small but because we had been living in a much smaller tent for the past three years, we were just so happy to have our own place at last.”

Using material supplied by the Norwegian Refugee Council (NRC), the family has now been able to double the size of their home. NRC has also provided toilets in Fatima’s settlement, water for drinking and washing, hygiene kits, and waterproofing materials in preparation for the winter storms.

A recent stroke has left Fatima’s husband Mahmoud, 47, unable to work, meaning the family is reliant on aid to get by.

Fatima possesses an admirable amount of positivity and does everything she can to make her family’s situation as comfortable as possible. But she is still facing a life of hardship and uncertainty, particularly as winter arrives.

“Yesterday it was very cold,” she says. “We’re scared because we have a wood-burning stove but now we can’t afford wood. Also, the chimney pipes are falling apart.”

Every winter, the rains mean that the family’s living space gets halved. The front room of the tent floods with water and the whole family must sleep in one room.

“We’ll leave it to God to keep us warm,” says Fatima. “Hopefully we can get some cash to fix the stove and keep us warm.”

Despite their modest means, Fatima’s family are making the best of their temporary home. “I’m not able to improve our living conditions, but I don’t want my family to be living in a depressing house,” says Fatima, with characteristic positivity. “Before it wasn’t cheerful and colourful, so I’m just trying to make it more liveable.”

We help to ensure that families who have been forced to flee feel safe and secure. With your help, we can help families like Fatima’s make their tents feel like home and keep them warm in winter.