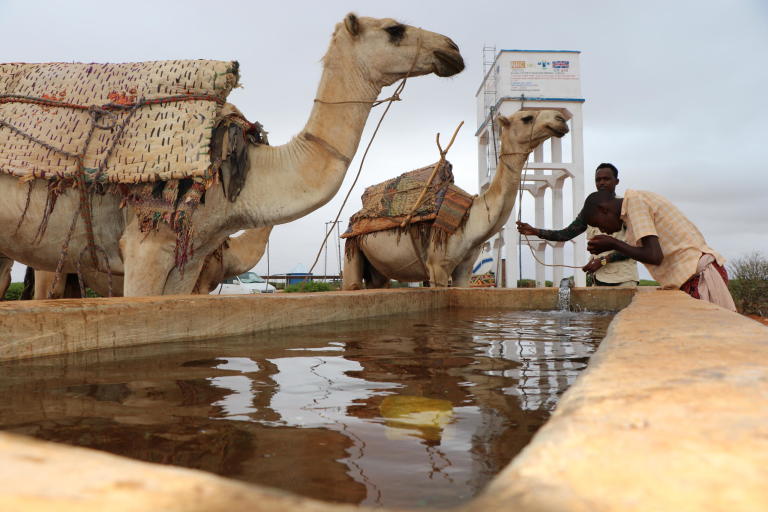 
How boreholes are transforming lives in rural Somalia

Abdulkadir Mohamed Published 23. Dec 2020
Somalia Durable solutions Water, sanitation and hygiene promotion (WASH)
Read caption Ali, 16, drinks water from an animal trough, constructed by NRC and funded by FCDO. Photo: Abdulkadir/NRC
Hassan Dhore, 70, used to spend half a day walking to distant wells to collect water for his family. Now, a new borehole in his village has transformed daily life for him and his neighbours.

Life in rural Somalia is not easy. Basic services are difficult to access, and clean water is in short supply. Drinking water is particularly important in Somalia, where many families are dependent on their livestock to survive.

Yet, only 52 per cent of Somalia’s population has access to a basic water supply. This means many families are forced to walk long distances every day to fetch water from open wells that are not always clean.

Hassan Dhore lives with his family in Dhagahdher village, over 20 kilometres from the nearest town, in the Galgadud region. This area of central Somalia is flat and dry, and is mostly inhabited by herders living in small villages.

“Getting enough drinkable water for my family was never easy,” he explains. “I used to wake up early in the morning and walk long distances to fetch just four jerrycans of water.”

The Norwegian Refugee Council (NRC) works to support refugees and displaced people in over 30 countries around the world, including Somalia. Support our work today.

“Sometimes, I used to spend half a day fetching water that turned out to be unclean,” Hassan says. “But since we had no other options, we used to drink it.”

“We used to prioritise the water I collected for drinking and cooking only. We didn't have enough for bathing or washing clothes.”

A solution was needed to this desperate situation. So, in early 2020, the Norwegian Refugee Council (NRC) undertook to rehabilitate the borehole in Hassan’s village.

The work was funded by the UK’s Foreign, Commonwealth and Development Office (FCDO) and involved the installation of:

The project has made a huge difference to Hassan and the other people living in this rural community. They now have easy access to clean drinking water for both themselves and their livestock.

“This is the first time I’ve had access to safe and clean water,” says Hassan. “Water is very important to us. It plays a crucial role in our lives.”

“I only need to spend 20 minutes fetching water from this water point. It’s a much better alternative to our previous way of getting water.”

“It’s an important milestone that this rural village now has access to clean water for the first time.”

This activity was part of NRC’s Building Resilient Communities in Somalia (BRCiS) project, with funding support from the UK’s Foreign, Commonwealth and Development Office (FCDO).

The Building Resilient Communities in Somalia (BRCiS) Consortium was created in late 2013. It was founded by a small group of people who had been working in Somalia in 2011 and had seen the famine unrolling before their eyes. The famine took a huge number of lives and pushed Somalis to the limit in their struggle for survival amid one of the world’s longest and deepest crises.

Somalia and the international community had clearly been caught off-guard. As a result, FCDO, one of the country’s main humanitarian donors, decided that they would change the way they funded aid in Somalia. They committed to multi-year, flexible interventions – supporting communities’ capacity to adapt to change and reduce risks. Thus, the BRCiS story began.

Four years of resilience building in Somalia has taken the BRCiS Consortium on a rich learning journey. The BRCiS approach is based on the principle that resilience programmes must be informed by the people they are designed to serve. We aim to stand by communities during hardships and offer a certain degree of protection, while promoting self-reliance and dignity.

This inclusive approach has led to impactful and sustainable programmes with a high level of community acceptance, that address local challenges and deep-rooted vulnerabilities.