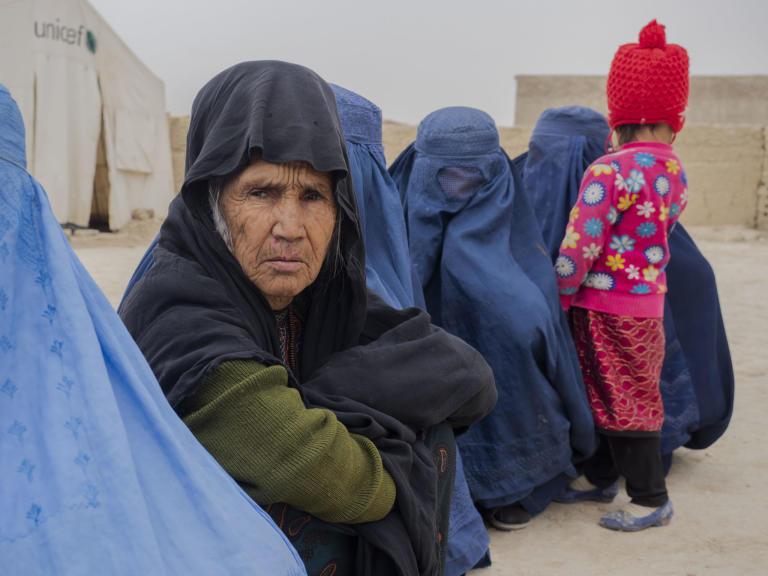 
How Ana got a roof over her head

Text: Roald Høvring Published 28. Jan 2020
Afghanistan Shelter and settlements
Read caption Ana, 67, is one of the many thousands who have been forced to leave their homes because of conflict in the war-torn country. Photo: Ingrid Prestetun
“We are freezing, starving and suffering, but now we are looking forward to moving into a new house,” says Ana, 67.

Ana, a widow, talks about her dramatic flight, the hardships of life on the run and her dream of a new home. She is one of the many thousands who have been forced to leave their homes because of conflict in the war-torn country. Many make their way to the larger cities, where they live in tents or semi-finished houses – without roofs, windows or doors.

In the first 11 months of 2019, 398,000 people were displaced by the conflict in Afghanistan, according to the United Nations Office for the Coordination of Humanitarian Affairs (OCHA). That’s an average of 36,181 people per month or 1,200 per day. Half of these are children.

Winter has just begun, and we are already receiving the first reports of children dying of cold.

NRC winterization assistance and shelter upgrades in 2019 has been supported by the Afghanistan Humanitarian Fund (AHF).

AFGHANISTAN/Mazar-i-Sharif: Ana is sitting on a blanket with her daughter-in-law outside the entrance to the cellar the family has lived in for the past year. With support from NRC, she is moving into a new house. Her gaze is directed at two helpful neighbours who are nearly finished completing the 67-year-old widow’s new house.

When we arrive, her daughter-in-law in a blue burka quickly disappears down the stairs to the cellar, but Ana would like to express her gratitude and tell us about the hardships of life on the run.

“Two of my sons were killed”

“During the spring and summer of 2017, when the fighting escalated in Faryab province, I lost two sons. My daughter-in-law became a widow and my four grandchildren became fatherless.

“We were shot at by both tanks and airplanes, and we fled for our lives. All we managed to bring with us were the clothes on our backs.”

She talks about houses that were bombed, dead bodies, screaming women and crying children. They walked on foot for several hours, before renting a tuk-tuk (Afghan tricycle taxi). A few days later, they arrived at Mazar-i-Sharif, where they settled on an inhospitable patch of land just outside the city.

“We spent the autumn and winter under a simple tarpaulin. We collected all the wood and combustible material we could find and tried to keep warm by lighting fires.”

The winter in this area is bitterly cold, with both rain and snow, and it can last for over four months.

“When spring came, I returned to our village and sold my house and property.”

With the advice and support of NRC, about 2,070 internally displaced families have been given the opportunity to buy housing plots in this area. Most of the families are from the provinces of Faryab and Balkh.

NRC helps the most vulnerable

This is where Ana and her family have settled down. “We managed to buy a plot of land, and in the spring of 2018, we moved into a cellar we dug out ourselves.”

Two years ago, this was just a field. Now there are two villages that have grown into each other, with infrastructure such as streets, water taps and shops.

Like many vulnerable families, Ana has received just under USD 300 to complete her house. The families must do the work themselves. Fortunately, Ana has good neighbours to help her.

“Now, with money from NRC, we have finally been able to finish the roof and install a door and a window,” says Ana.

“When the first families arrived, this was a dead field that was not used for anything. All the families here have fled from the same area. We take care of each other and help those who have the hardest time, such as Ana,” says Amanullah, who represents the families in the settlement.

The former teacher fled from Faryab province with his family about three years ago. On his own initiative, he managed to reach an agreement between the families who had settled in the area, the local authorities and the landowner.

The families were able to purchase plots of land on hire purchase. The families built the houses themselves, while the local authorities provided the infrastructure. Various humanitarian aid organisations, such as NRC, have also contributed.

“The biggest problems are poverty and a lack of paid work. Some are able to find day work, such as work on farms, construction or other manual labour,” says Fardin Hafizi, who heads NRC’s shelter project.

There are no health facilities or schools in the settlements. There is a tent where a teacher from another school in the city comes to teach.

“But there are far from enough teachers, and the summers are sweltering hot and the winters are biting cold. There are very few parents who can afford transportation for their children to attend schools in the city. Many are also afraid to send their children alone. This is especially true for the daughters,” says Hafizi.

New families arrive every week. They come from the same villages.

“That’s why they are well received. Everyone here knows what it means to have to flee their home, to leave everything they own and literally start from scratch. So naturally, they are hospitable to newcomers and are happy to give away the tents they lived in before. And now that winter has set in, newcomers are invited to come and sleep in the houses at night,” Hafizi says.

According to OCHA around two-thirds of displaced households in Afghanistan (65 per cent) report that they do not live in a permanent shelter (10 per cent live in tents, 19 per cent in makeshift shelters and 36 per cent in mud/brick shelters).

Hafizi has gone to visit the widow Ana. He instructs the workers, makes sure the roof is finished and that doors and new windows are put in place.

“In the beginning, we were providing life-saving humanitarian aid such as distributing tents, kitchen sets, blankets, mattresses and hygiene items.

Other organisations have now taken over this work, and NRC is focusing more on long-term assistance and lasting solutions.

“Tents are only a temporary solution. That’s why we’re focusing on building houses. We help families build simple homes. This autumn we have upgraded houses with new roofs, windows and doors.”

Concerned about her grandchildren

Ana is concerned about her grandchildren and her own health.

“The children don’t go to school, we don’t have enough money for clothes, and there are no health services in the area. I myself am sick, but I don’t have the money for medicine or transport to the hospital.”

Relatives and good neighbours sometimes give the family some money so they can buy some flour, rice, potatoes and a few vegetables. But the family has few opportunities to cook. The oldest children bring flour to a baker in the neighbourhood, and in exchange for a couple of Afghanis they receive some bread.

Ana pulls out a white plastic bag of dried bread.

“Look, this is all we have to eat. Here, we live worse than animals. In our village, we had camels, donkeys and goats. And we had fruit trees and vegetables. We lived well and we managed on our own. Now we depend on the charity of our neighbours to survive. They bring over old bread that they have collected and occasionally some vegetables.

OCHA reports that nearly two out of three Afghans live in areas directly affected by war and conflict. More than half of them are children under the age of 18. (47.3 per cent of Afghanistan’s 35.7 million inhabitants are under the age of 15). They are increasingly exposed to violence and displacement – and they lose their livelihoods and access to public services, such as healthcare and education.

The family has recently moved into their new one-room house. Ana sleeps on the floor with her daughter-in-law and four children. They have only a few pillows and blankets to put over the cold concrete floor. There is no electricity in the settlement.

“Some families have small solar panels that provide enough power for a light bulb, but we don’t have anything like that,” says Ana.

The family has a sandali, which is a traditional Afghan heater that consists of a wooden frame and a container of glowing charcoal underneath. You cover it with blankets, and then you crawl under the blankets and warm your feet.

“It was very cold last night. We haven’t had enough money to buy charcoal and a sandali only stays warm for a few hours. But I have been told that NRC will give us money tomorrow, so that we can install a better wood stove and buy wood that we can have through the winter,” says Ana.

A wood stove and fuel