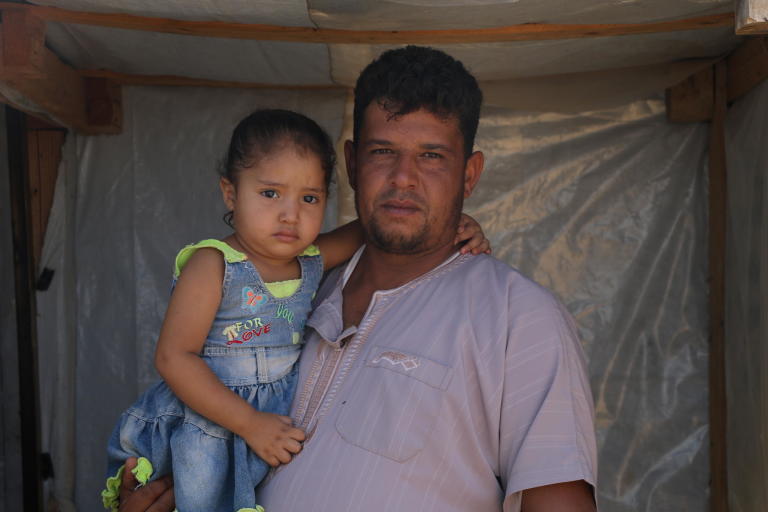 After nine years of conflict in Syria, Syrian refugees across the Middle East region are still struggling to create a stable life for their children. In Lebanon, where more than 200,000 Syrian children have been born since 2011, Syrian parents continue to face legal obstacles when they need ID papers for their children.

According to the UN refugee agency, 70 per cent of Syrian newborns in Lebanon lack complete birth registration certificates. This puts hundreds of thousands of children at risk of abuse and exploitation.

These children may have problems accessing services such as education, healthcare, legal support or humanitarian assistance if they return to Syria in future.

Hassan, 35, is one of thousands of fathers whose children were born in Lebanon but who was not able to register the births – a problem he was not aware of before he got married.

“There was no proof they were my daughters”

Hassan is originally from El Hasaka in Syria. A few years before the Syrian crisis began, his parents fled to Lebanon to seek a better life for their children.

Life was harsh in Syria and there were no job opportunities where they lived. However, Hassan’s family would regularly visit their homeland, and whenever his parents had any official errands, they would cross the borders to deal with the Syrian authorities.

Although Hassan grew up in Masharih al-Qaa in Lebanon, a small town near the Syrian border, he only has Syrian nationality. He is therefore required to follow the same legal processes for family documents as any other Syrian refugee in Lebanon. Now that the borders are closed due to the conflict, travelling to Syria as his parents used to do is not an option for him.

“My four daughters were born in Lebanon but I was not able to legally register their births,” says Hassan. “I always worried and stressed about it because I knew that if I ever decided to go back to Syria I wouldn’t be able to take them with me. There was no proof they were my daughters.”

“We didn’t have enough knowledge about how to register births, or enough money to complete the legal process ourselves. This town is on the outskirts of Baalbek and there is no proper public transport for us to visit the required authorities,” Hassan explains.

How we helped Hassan

Children without complete birth certificates can be prevented from travelling. If families return to Syria it can be challenging for them to update their records, because their documents need to be finalised in Lebanon first.

It is therefore crucial that Syrian refugees sort out their papers as soon as possible to avoid unexpected bureaucratic barriers in the future.

Now when the borders finally open, I can send my family to Syria without any legal problems
Hassan

As part of this programme, we reached out to Hassan through a joint project with the International Rescue Committee (IRC) and Humanity Inclusion (HI), with support from the UK’s Foreign, Commonwealth and Development Office.

“A few months ago, NRC visited us and provided information on legal assistance,” Hassan explains. “NRC then referred us to the International Rescue Committee (IRC) to register my daughters’ births, and helped me to obtain a marriage certificate.”

“I met with a lawyer who processed the paperwork. When it was complete, I signed it and it was done. It was very comfortable and the process was very easy. Now when the borders finally open, I can send my family to Syria without any legal problems,” Hassan says. “I am beyond happy with how NRC helped me.”

About our ICLA work

Together with specialised lawyers, our teams organise legal clinics to provide tailored legal counselling. We use mobile legal clinics to help refugees access legal services where there are limitations on freedom of movement.

In complex cases and where refugees are vulnerable, we offer legal assistance and representation at administrative authorities and courts.

We also aim to address the legal challenges faced by the Palestinian refugee community in Lebanon, through the provision of legal services focusing on civil documentation and housing and property rights.

During the outbreak of Covid-19 in Lebanon, our ICLA services have been implemented remotely wherever possible. Our staff and lawyers have provided information and counselling by phone, enabling us to continue delivering legal services in response to refugees’ needs during these challenging times.