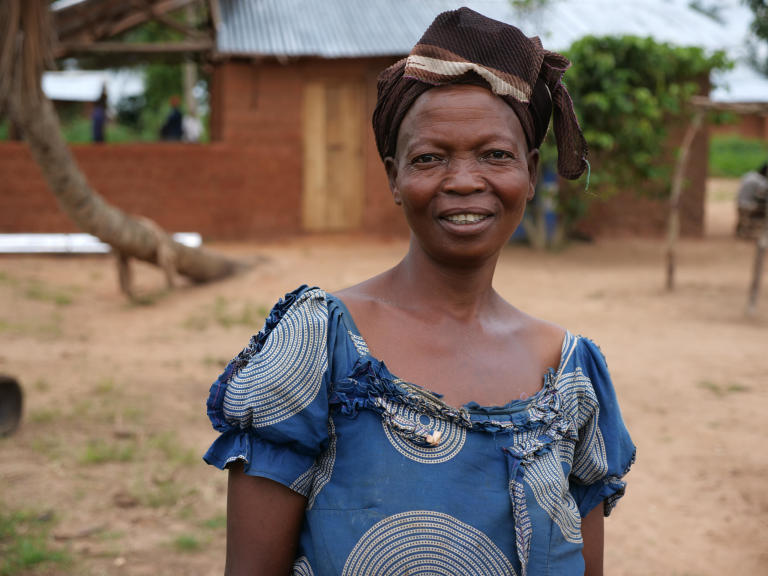 
Finally home after five months hiding in the forest

For Monique, home means a lot more than four walls and a roof. After fleeing her village, losing her husband and spending five months hiding in the bush, home to Monique means safety and stability.

In August 2016, the province of Kasaï-Central in the Democratic Republic of the Congo was the flashpoint of an armed conflict that eventually spanned five provinces. Known as the Kamuina Nsapu rebellion, the conflict killed over 3,000 people and caused 1.6 million to flee their homes.

Monique and her ten children were among the many displaced.

Monique remembers it all very clearly. It was April 2017 and in the middle of the day, she noticed armed men in the distance approaching her village. She quickly gathered her children together and fled to the bush, along with several neighbours.

Monique was relieved later that day when her husband and many more neighbours eventually joined them there. They created a sort of temporary settlement in the bush, using sticks and palm fronds to provide themselves with some semblance of cover.

There was little to eat and drink. Her husband occasionally ventured out of the bush to search for wild fruit and anything else they could eat.

One day he ventured out and didn’t return.

“We kept saying to ourselves, ‘don’t worry, he’ll come back, he’ll return very soon’. But he never came back,” Monique recalls with a heavy sigh. To this day she does not know exactly what happened to him, although she suspects that he was caught and killed by armed fighters.

Returning to a scene of destruction

Monique and the other villagers lived like this in the forest from April to August 2017, until one day government soldiers found their hiding place. The soldiers told them that they couldn’t stay there any longer because they might be mistaken for armed fighters. They led them to a nearby village and left them there.

“Kind souls pitched in what they could and helped us with food and clothes, but in spite of all of this, it was still very difficult for us,” confesses Monique.

They created shanty shelters with wood and palm fronds until their village chief convinced them to go back to their home village in October 2017. When they returned, they found that the entire village was destroyed. All the houses had been burned, and it was nearly unrecognisable.

Monique did her best to construct a small mud hut with thatched roofing. She and her family lived there for around three years, always fearing that they would eventually have to flee again.

NRC is responding to the challenge

Today the province of Kasaï-Central is relatively calm. The worst of the violence stopped in 2019 with the inauguration of a new president in DR Congo. As a result, many formerly displaced people like Monique have now returned to their villages. But they all returned to find that they had lost their houses and possessions.

To respond to this situation, NRC decided to support some of the most vulnerable returnees. We provided conditional cash transfers to selected families so they could build new homes.

As a widow and mother of ten, Monique was identified as being one of the most vulnerable returnees. Along with 1,600 other people in 40 villages, she received an initial cash transfer equivalent to USD 80 to begin the construction of a new home.

The villagers used the money to hire workers to construct their houses, paying them for their labour and any materials used. When construction reached a certain level, the villagers could request a second and final instalment of cash, equivalent to USD 60, which would then be used be used to finalise construction.

Monique received her first instalment of cash in July 2020. By September 2020, her new house was completed and she moved in with her children.

“Compared to how I was living before, in this new house, I feel special and proud. I could never have imagined living in such a house,” says Monique.

“I refused to use thatch roofing because of how easily it burns, and I chose to use sheet metal roofing instead. This house is never going to be burned down. I feel safe here.”

A house to be proud of

Monique’s situation is still challenging. The aftermath of the conflict left the entire region impoverished and short of food. She cannot afford to purchase any furniture just yet. Her priorities for any money that she earns now are focused entirely on feeding her children.

But today, Monique stands inside her brand new house full of pride. And though the house is still mostly empty, she has big dreams about the furniture that she will eventually fill it with and the finishing touches that she has planned, including a paint job.

Life isn’t perfect now for Monique and her family. The new house they are living in did not erase all their problems.

But the fact that they can lay their head down in a place where they feel safe, with a solid roof over their heads, means they can begin to put the trauma they have experienced behind them.

They can finally feel at home.

This assistance was possible thanks to the support of our partner, UNCHR (the UN refugee agency).

Buy gifts that save lives

Families who have been forced to flee need a temporary home. A place to be safe together that keeps the cold away.
40 € Buy

Displaced children are the most at risk. Give these little ones a better start to life.
30 € Buy
More gifts that save lives