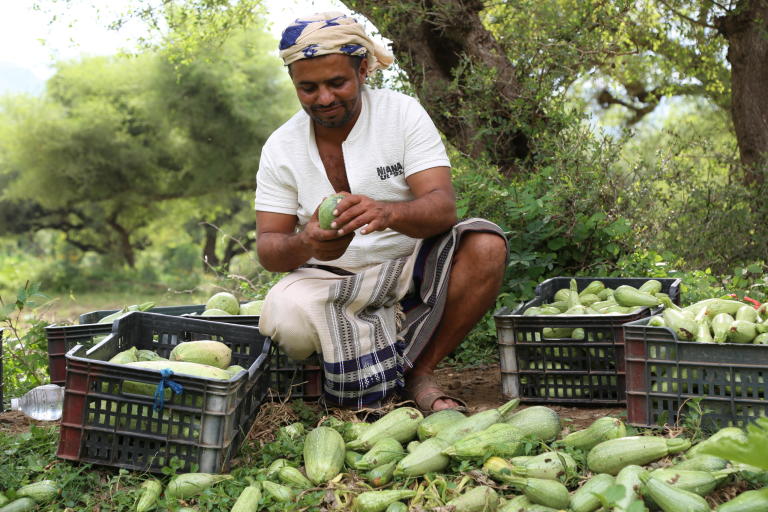 
Farming in the shadows of war

Nasser Abdulkareem Published 28. Apr 2020 Edited 23. Mar 2020
Yemen Livelihoods and food security
Read caption Mohammed’s farmland and livelihood were destroyed due to the war. But now, with assistance from NRC, he has been able to get back to work to benefit the whole community. Photo: Nasser Abdulkareem/NRC
In 2019 Yemen was named the world’s worst humanitarian crisis, with 20 million people struggling to find enough food for survival. Before the war began in 2015, farming was one of the most profitable sectors in the country. The Norwegian Refugee Council (NRC) has been assisting farmers to get back to work so they can feed their communities.

The brink of widespread famine

Before the war, farmers sent food to local and international markets. Vegetables were affordable. But the war changed everything.

When battles broke out in Yemen, green areas became barren. The water pumps and generators used by the farmers were severely damaged. People who had been displaced by the conflict were unable to access their farms. Food prices increased, even doubling in many places. Basic supplies were beyond the reach of many Yemeni families. The farmers themselves changed from being the producers of food to consumers.

The impact on farms did not only affect the farmers’ livelihoods, but also Yemeni people across the country. An estimated 80 per cent of the population – some 24 million people – now require some form of humanitarian or protection assistance. The country has been left on the brink of widespread famine.

Mohammed Abdulwahab, 33, belongs to a family with a long tradition of farming. He inherited the job from his father. He himself is a father of four children and farming is the main source of income for the family.

“When the war broke out, most residents fled their homes but we didn’t flee because we have livestock and we didn’t have anywhere else to go,” Mohammed says.

“We remained in the house but we were unable to plant our land. I had to leave the house every two to three days to search for food to bring back to the family.”

Mohammed states that half of his farm had become barren by the time fighting in his area stopped. Farmers like Mohammad had to use all their savings to survive during the conflict, and therefore were unable to buy seeds and other material to return to farming.

“We experienced real suffering,” he adds. “We were struggling until NRC intervened and helped us with seeds, farming tools, water tanks and money to pay for the cost of ploughing.”

Assistance from NRC helped the farmers to replant their land. This was beneficial to all residents in the area as the more vegetables that there were available, the cheaper they became. It wasn’t long before the prices of vegetable decreased by half.

Mohammed believes NRC came at the right time for his family and he hopes that more support will be available in the coming months.

“I thank NRC for helping us to return to our land and hope they can continue to support us in the coming year.”

Muneer Rageh, NRC’s Food Security and Livelihoods Officer in Taiz governorate, says the project targeted people who returned to their homes after being displaced, as well as the host community.

“With the support of the Yemen Humanitarian Fund, NRC trained farmers in modern farming techniques and supported 250 farmers to grow vegetables, and another 400 farmers to grow grains,” Muneer says.

We also supported the farmers with tools, water tanks and money so they could plough their land and grow vegetables.