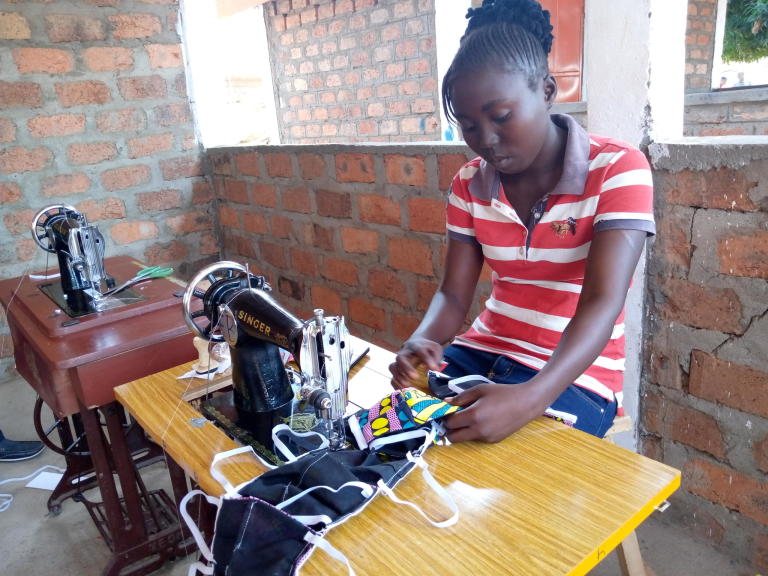 Since 2013, armed conflict in the Central African Republic (CAR) has forced over 680,000 people to flee their homes and live in displacement within the country’s borders. Esther is one of them. In 2014 she fled her village together with her parents. They settled in a displacement site outside the local UN Peacekeeping Mission’s headquarters in the central-northern town of Kaga-Bandoro.

The conditions in the site were difficult and the family depended solely on humanitarian assistance. Though she was in school before the conflict began, she had to drop out of school when her family fled.

"I had no choice but to stop studying because my parents had no financial means to pay for my education," said Esther.

Esther’s situation is unfortunately not unique. Many young people in CAR have to give up on formal education because of the instability and lack of financial support. Seventy-five per cent of CAR’s population is under 35 years of age. Many of these young people are out-of-school or unemployed, making them an easy target for armed groups looking to recruit young fighters.

In response to the lack of opportunities for vulnerable young women and men in Kaga-Bandoro, the Norwegian Refugee Council (NRC) launched a vocational training programme. Our Youth Education Pack (YEP) trains young people affected by conflict in various trades such as sewing, carpentry, agriculture and masonry.

Esther is one of the young people who has benefitted from this programme. Without any prior experience, she enrolled in the programme and learned how to sew confidently. This has opened up a world of opportunities.

Using her skills to fight Covid-19

Faced with the ever-increasing number of new Covid-19 cases and deaths in CAR, Esther came up with a creative idea for how she could make a difference.

She decided to sew face masks to help keep people safe. She felt that selling these in the local market would be a way to use her skills to save lives.

"I learned that to protect yourself from the virus, you should wear a mask, but I noticed that these masks are not easily found in stores here. In Bangui [CAR’s capital city], there are tailors who make masks, so I had the idea to make and sell masks at the market here in Kaga-Bandoro in order to save lives,” Esther explains.

Today, Esther’s persistence and hard work are bearing fruit. She sews around 50 protective masks per day. With the income from her work, Esther is able to take care of her two-year-old child. "Above all, I am responsible. I didn’t want to continue to be dependent on my parents. I'm very grateful to have a job," she says.

Esther hopes that these masks will contribute to the eradication of the coronavirus in CAR.

Thanks to funding from our partner Education Cannot Wait (ECW), Esther was among 120 young people who accessed our vocational training in Kaga-Bandoro during 2019.