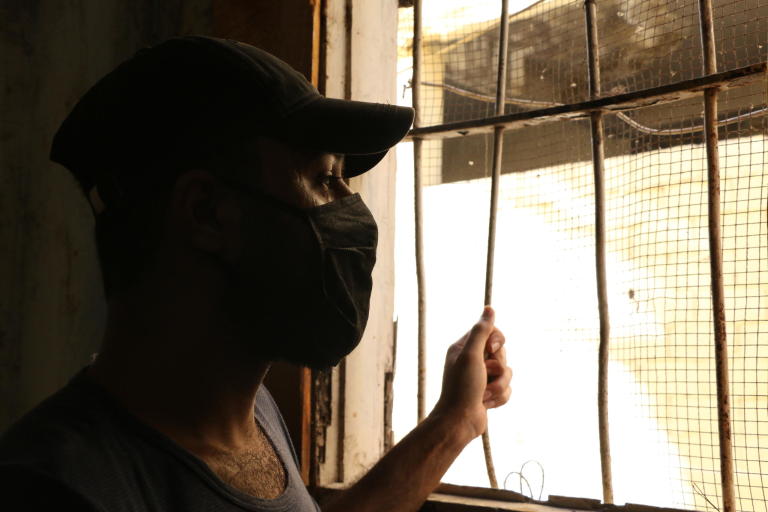 
“Discrimination is part of our everyday lives”

By Racha El Daoi Published 24. Sep 2020
Lebanon Housing, land and property (HLP) Shelter and settlements Syria crisis
Read caption Neji*, 25, sought refuge in Lebanon six years ago. The explosion in Beirut caused him to re-live one of the experiences that he had fled from in Syria. Photo: Zaynab Mayladan/NRC
“Disasters like this can bring out the worst in people,” says Neji, a 25-year-old Syrian refugee in Beirut. He has been living as a refugee for the past six years and has faced discrimination. As the situation in Lebanon deteriorates, he is feeling increasingly unsafe in the country where he once sought refuge.

On 4 August 2020 Beirut was hit by a massive explosion that devastated thousands of lives. The Norwegian Refugee Council (NRC) has been repairing homes and providing cash-for-rent support to enable people to live in safe and dignified conditions.

It was while we were assessing the needs of those living in the most affected areas that we met 25-year-old Neji*. His life has been characterised by chaos and conflict for several years. Today, he lives in a two-room apartment with seven other Syrian men.

On the day of the explosion, Neji was at home when he heard what he thought were fireworks. He stepped out into the courtyard around the corner and saw smoke rising from the port, less than 1 km away from where he lives. People in his neighbourhood started to gather outside wondering what might be on fire. Little did they know that just few minutes later, they would be in the middle of the worst explosion in the history of Lebanon.

“In a few seconds, our lives turned upside down,” says Neji. “No-one expected an explosion – we thought it was only a fire in one of the hangars. It was tremendously loud, and the pressure wave threw people off the ground. Glass shattered everywhere and concrete bricks were falling around us from the buildings that were collapsing.”

“At first I thought that a missile had been fired at the port, so I needed to get away. Slowly, I realised that wasn’t the case,” Neji continues. “In Syria, I experienced a lot of bombings but nothing I saw there can be compared to this explosion. It has been devastating.”

A catastrophe on top of a crisis

The explosion is a catastrophe that has come at a time when Lebanon is already facing a deteriorating socio-economic and financial crisis. The currency has lost 80 per cent of its value against the US dollar in recent months, and refugees are feeling the impact.

“Lebanon has been going through a terrible situation over the past few months,” says Neji. “The unstable financial situation and the coronavirus pandemic have left us with no means to provide for ourselves. I used to work at the port but since the coronavirus outbreak, the work opportunities have decreased, and I have barely been able to pay the rent. Now with the explosion, I don’t have a job at all.”

“All our windows are destroyed, door locks are broken, the walls have cracked, and parts of the roof in the kitchen have collapsed as a result of the explosion. We need urgent repairs ahead of the winter but with no jobs and income we can’t afford to repair all the damage,” Neji explains.

“Syrian refugees are blamed for everything”

Neji says that the situation in his neighbourhood has become very tense since the explosion.

“Disasters like this can bring out the worst in people when everyone is desperate. We are used to hearing a lot of insulting words, but now it is much worse than before. Discrimination is part of our everyday lives but I never thought it would reach this point,” he says.

“The other day, a charity organisation was distributing food parcels in the courtyard, but since we had already experienced discrimination against us on a previous occasion, we didn’t bother to go and try to get a box,” he continues.

“We heard people screaming so we stepped out to see what was happening and we noticed a fight had broken out among the people in the queue. But then suddenly people started attacking us because other Syrians were involved. My roommates and I were beaten and shouted at because they claimed that we were taking assistance away from them. We were not even there but they took out their anger on us because we were Syrian.”

“If a person is bad, it’s not because of his nationality but his personality. I understand people lost everything and are very stressed, but there is no excuse for racism. We were just like anyone else before the war in Syria. I was a second-year Law student and never had to rely on anyone. My life was great until the war started.”

“Today, Syrian refugees are blamed for everything negative that is happening in Lebanon, but we were equally affected by the explosion. I actually don’t want charity but a stable income and a job to provide for myself.”

Neji has had enough of people taking sides. It was one of the reasons he left Syria in the first place.

“Syria was a beautiful country. The people were united under the Syrian nationality despite their religious sects but now it is a battlefield. Everyone is against everyone and there is no option for me to go back to Syria today. My family tells me life in Syria is unbearable and the only way to survive is to take up arms. I don’t want to do that. I fled the war because I didn’t want to take sides,” Neji explains.

“Imagine, the new generation of children and youth are being manipulated to hate each other. The children of Syria today learn the difference between the sound of an M16 or MKA rifle rather than getting an education.”

Neji is now in limbo, struggling to survive in Lebanon, but unable to return to Syria.

“I hope that one day I’ll have enough resources so that I can resettle in a third country. That is the only chance I have to a better life,” says Neji. “My cousin went to Europe and he tells me that for the first time in his life he feels like a human being. I know racism exists everywhere, but I want to live in a country that respects me and where I can enjoy my basic human rights.”

“We don’t have any dreams left; everything has been taken away from us,” he continues. “I haven’t seen my family for over six years, and I don’t know if I will ever again. I’m a 25-year-old man who misses his mum. I want to hug her and smell her perfume again.”

Our response to the Beirut explosion is made possible thanks to the generous support of people like you who have donated to our fundraiser.

We would also like to thank the Norwegian Ministry of Foreign Affairs, German Federal Foreign Office, European Civil Protection and Humanitarian Aid Operations for their support.

Support our work
The people of Beirut need our help: your donation will help thousands of people made homeless with emergency shelter and urgent essential aid.
Select monthly amount
Choose amount
Choose amount
You can contribute anonymously, but please note that you will not get a receipt if the email field is left blank.
Our terms and conditions, including privacy policy statement
Support our work
Personal details:
Remarks
Name
Address
Post
Location
Surname
Personal details:
Remarks
Name
Surname
Select payment method