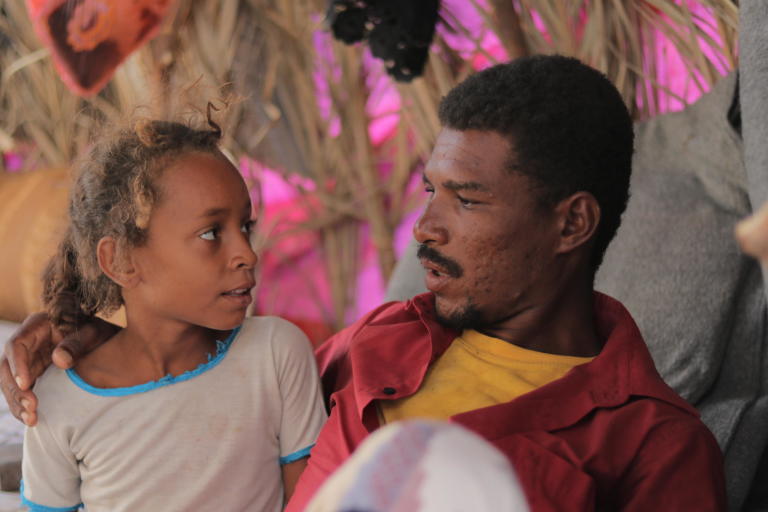 Nasser Abdulkareem Published 16. Dec 2020 Edited 15. Dec 2020
Yemen Internal displacement
Read caption Taha and one of his daughters inside their tent in Al-Gasha camp, which Taha made from discarded sheeting and wood after fleeing his home in Hodeidah. Photo: Mahmoud Al-Filastini/NRC
The war has raged for nearly six years. Armed clashes take place in residential streets, roads are blocked, and aid agencies struggle to get through safely. Families in two of Yemen’s most violence-stricken areas explain what it is like for children to grow up amid the sound of gunfire.

Taha Shamal, 27, fled his home in October this year. With no other options, he had to cobble together a tent from plastic sheeting to shelter his heavily pregnant wife and three children.

“I wasn’t worried about myself,” he explains. “I was worried about my family and children. The shelling and bombings terrified them. You could hear the bullets and mortars from our room, so the children couldn’t sleep.”

The Norwegian Refugee Council (NRC) works to support refugees and displaced people in over 30 countries around the world, including Yemen. Support our work today

Taha’s village was once small and peaceful. But as the war progressed, people started to flee. Surely the battles would pass them by, Taha reasoned. He had never left his home before and had no idea where to go.

Then: “A mortar fell close to us in the village. A mother and her daughter were killed. The bullets and mortars were around us all the time.”

So, he gathered some clothes and a small water container, and fled with his family.

It was, Taha says, “the saddest and most difficult moment in my life”.

The most dangerous place to be a civilian

Hodeidah governorate, where Taha is from, remains the most dangerous place in Yemen to be a civilian. Despite a ceasefire signed two years ago, and international laws protecting civilians in times of war, an average of at least one person a day is maimed or killed by armed conflict there.

Most of the violence is happening in villages like Taha’s, among rural farmers and fishing communities, who have already suffered years of hunger, malnutrition and fear.

At first, after fleeing, Taha’s family slept on the street. Then they found Al-Gasha camp. “I collected wood and plastic sheets,” Taha recalls. As soon as he had built the four walls, he moved his family in, even before they had enough to make a roof.

Taha’s family sometimes have no food or water and have to ask neighbours for help. They have no savings, and no chance of work. The tent they have made is too flimsy to protect them from the wind and rain. And Taha’s wife is about to give birth to a new baby.

“She is in the ninth month and I don’t have anything, and don’t know anyone here,” Taha told us. “I don’t even have money to pay for the bus to the hospital.”

But Taha’s main concern is that they are away from the violence – for now.

There are no bombings, no mortars and no missiles, and my family is safe. This is the most important thing.

“There are no bombings, no mortars, no missiles, and my family is safe,” Taha says. “This is the most important thing: that I can live here safely. My children can sleep peacefully and can go out to play with no terror.”

In another part of Yemen, an area of Taiz so remote that camels are the main form of transport, Ahmed* says families are living in constant fear of death.

“I’m now 60 years old and I’m living through the worst years of my life,” he says.

Though the battles grow fiercer at night, even the daytime is dangerous here in Waher village. “A girl was killed at sunset while returning home,” Ahmed explains. “Another day, a driver was shot while he was driving back from the market.”

Ahmed himself has been caught in the crossfire, when a nearby car was shot at. “My friend and I lay flat on our stomachs in the field while the bullets passed over our heads. That is only one of many cases. I’m one of thousands living in danger in this village.”

Waher village lies between two mountains, each under the control of an opposing side in this brutal war. When the fighting starts, people can’t leave their homes.

Villagers are afraid to gather firewood or tend their sheep in the mountains because of landmines, while too many have been shot for them to venture into the fields they depend on for farming. It takes an hour and half to get to the nearest market since the main road has been blocked by the fighting.

“There is nothing we can do,” Ahmed told us, simply.

Ahmed lives with 12 of his grandchildren, who are often unable to sleep because of the noise of shelling and fighting. “But recently,” he says sadly, “they have started to get used to it.”

“All we need is an end to this war”

A shocking 1,919 civilians have been injured or killed so far this year in Yemen. In the last two weeks alone, three mass casualty events have shaken the country. Children were killed and maimed in both Taiz and Hodeidah, the areas where Ahmed and Taha live.

This is happening at a time when 13.5 million people in Yemen are at risk of starvation, and thousands already live in famine conditions.

NRC helps Yemeni families forced to flee, and the communities who host them. This year alone, we have helped over three quarters of a million people. But the longer the fighting rages on, the more deeply devastating are the effects.

“All we need is an end to this war so we can continue our normal lives,” says Ahmed’s neighbour Mahmoud*, speaking for so many of the people NRC has interviewed. “We need to sleep peacefully without the sound of gunfire or explosions.”

Read about our work in Yemen