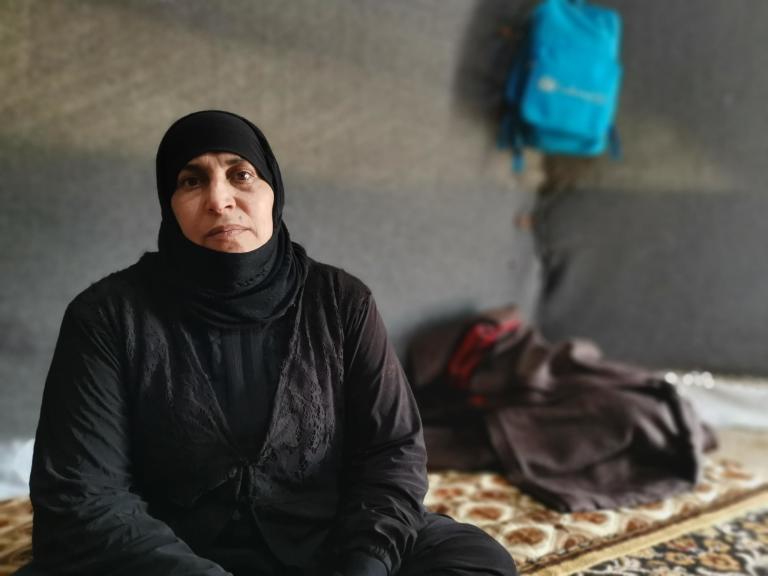 By Helen Baker Published 16. May 2020
Iraq Gender Housing, land and property (HLP) Shelter and settlements Return
Read caption Um Ibrahim and her children are stuck in a displacement camp, unable to return home, as they can’t renew their identity cards without her husband who went missing in conflict. Photo: Helen Baker/NRC
Iraq's women are paying a high price in the aftermath of the recent conflict, with many unable to return home without the support of their husbands. We spoke to four displaced women about their experiences.

Iraq has experienced repeated cycles of conflict, mass displacement and destruction over the past three decades. The most recent war with the Islamic State (IS) group caused unprecedented destruction of homes and infrastructure in northern and central Iraq. At least 138,000 homes were damaged or destroyed, and more than six million Iraqis were forced to flee.

Many of those who have been able to return to their home villages and towns still struggle to secure a home and rebuild their lives. But it is women who are paying the highest price.

New research by the Norwegian Refugee Council (NRC) has found that women are 11 per cent more likely than men to be living in an overcrowded shelter. Women returning home after displacement are 14 per cent more likely to fear being evicted in the coming six months, compared to male returnees. Nearly one in 10 displaced women report their property being occupied by militias, security forces, community or tribal leaders.

Here are some of these women’s stories.

Reem lost her house when she was divorced

“I wish I had a home to return to, but I have nothing,” says Reem, who has been living in a displacement camp since 2017.

Reem’s husband divorced her to marry another woman. As he was the owner of the home they had shared, Reem was left in the displacement camp with nothing.

She worked for a while as a cleaner in the NRC camp management office, and with the money she earned, bought a piece of government-owned land in an agricultural area. But this land can be reclaimed by the government at any time.

“The government should help us to find a place to live or at least give us compensation. We cannot return to our areas of origin as there is nothing left. I no longer have a house or family living in that area.”

“My husband owned our family property, but was killed during the retaking of Mosul in 2018. He bought the house from his father without a contract. Now I cannot prove that it belongs to us,” says Kutayba, 39, who fled from Nimrud district in Mosul. She has been living in a displacement camp since 2018.

“Even if the house was registered under my name, it would not change my situation. The tribal leaders have the ultimate power in our area,” she says.

NRC’s research found that despite the Iraqi government having laws to protect women’s rights, customary and religious justice mechanisms are often regarded as the most reliable and socially acceptable route to justice. Local norms often restrict a woman’s right to independently own property.

Kutayba says she fears for her younger sons after losing three children already.

“There is nothing to return to. My tribe will never let me go back.”

Um Ibrahim and her children have no ID

“My main issue now is that mine and my children’s identity cards are old and I can’t cross checkpoints unless I renew them. But I can’t do this without my husband’s presence or having the original copy of his ID, and he is missing,” says Um Ibrahim, 44, from Hawija District in Kirkuk Governorate. Um Ibrahim fled with her six children to a displacement camp during the fight against IS group.

Her husband was a farmer and owned the family’s house and land. During the fighting, he decided to remain on the farm to protect the land and livestock. Later, Um Ibrahim received information from people in the village that her husband had been taken by militias.

“I am afraid if I go back to our home, whoever took my husband might take my children as well or harm them,” she says.

“My family cannot do anything to help me. They are in the camp just like me. We all are from the same village and none of us can return home. The only thing that might help us to start our lives again is to renew our identity cards and get some compensation. This would enable us to start a small project and gain an income.”

Rabiya’s husband is in prison

“We have the papers proving that the house belongs to us. But when we fled, we left everything in the house. We did not really think about bringing our house ownership documents. We were only thinking of our safety,” says Rabiya, 47, a displaced mother of seven children from Hawija.

“As my husband is in prison accused of joining IS group, no-one from the government will help me to prove that the house belongs to us,” she says. She has been living in a displaced camp since the war to retake Hawija in 2017.

Her husband and oldest son are in prison. Rabiya claims they are falsely accused of being affiliated with IS group. Her husband was a shopkeeper, selling products to everyone, including people who belonged to IS group.

“Our relatives accused them of supporting IS group and brought some fake witnesses to falsely accuse them,” she says.

Three of Rabiya’s children do not have ID cards and others have old versions, but they cannot get new ones issued because of their father’s situation. In order to get new cards, Rabiya would have to publicly denounce her husband and the crimes he is accused of.

“He is already sentenced to 15 years in jail,” she explains. “If I do that, they will add 15 more years, or he will get a life sentence.”

When asked about returning home, Rabiya says: “I am tired of living in camps and being moved from one camp to another. I miss my house.”