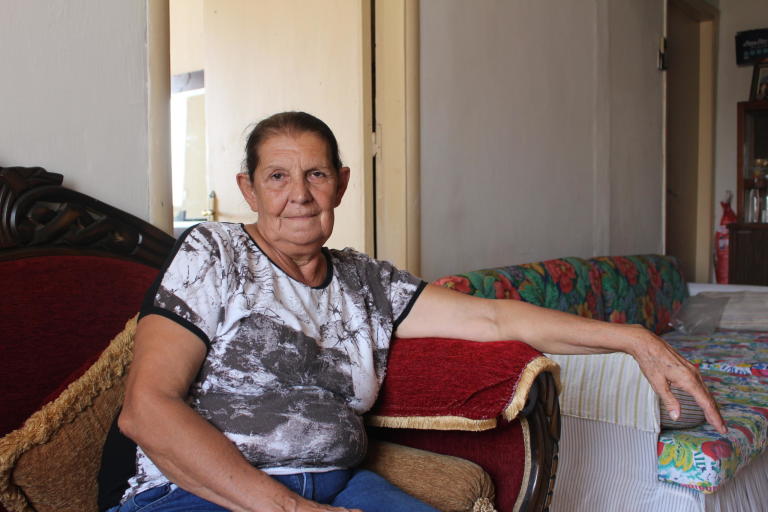 
Beirut explosion: “We were saved by a miracle”

By Racha El Daoi Published 20. Aug 2020
Lebanon
Read caption Hayat, 70, lives in Karantina, one of the areas most affected by the explosion in Beirut. One of her sons was severely injured when shards of glass and metal gored his body. Photo: Racha El Daoi/NRC
Hayat survived the recent explosion that devastated Beirut. One of her sons was badly injured in the blast and her apartment was severely damaged. When our team visited her home to assess the damage, she told us about her terrifying experience.

On 4 August 2020, a massive explosion hit Beirut port, causing extensive damage to the entire capital city. At least 178 people have died and more than 6,000 were injured. The Government of Lebanon estimates that the explosions have left more than 300,000 people homeless.

Hayat, 70, is one of the thousands of people who were directly affected by the blast. She lives in the Karantina district, which is less than 1 km from the explosion site. Her sons live with their own families on different floors of the same three-storey building.

This was Hayat’s experience, in her own words.

“We are lucky he survived”

I didn’t know what to do. My first thought was that my sons could not have survived this. Then, I saw my son, Giofar, coming up the stairs calling for me in panic to check if I was okay. Blood was dripping from his head and his body was covered in shards of glass.

We have lived in this building for 27 years. I have witnessed all the wars and conflicts but I’ve never seen Beirut so severely damaged. The scene outside our home looked like a battlefield, beyond what you can comprehend. People were running around in panic, bodies on the ground, blood everywhere, buildings falling apart, cars under the rubble and broken glass covering the streets.

There is a hospital opposite to our home but it was totally destroyed, and we were not able to move to take my son to the hospital. We lost him in the chaos on the street, but a police officer had seen him injured and took him to another hospital about 15 km from where we live. He came back fully stitched. We are lucky he survived.

My other son’s wife gave birth a few hours before the explosion. She delivered a baby boy. The hospital had to release her only a few hours later to free up space for those who were heavily injured in the blast.

My grandchildren are all traumatised. They are afraid and can’t sleep during the night. Whenever they hear a loud sound, they start screaming and fear another explosion will go off. We are constantly worried that something else will happen.

When I look at the destruction around us, I can only say we were saved by a miracle. In the end all the material damage can be replaced. We can eventually buy new furniture or clothes but if someone is injured or dies…we can’t replace a life.

Imagine, one of the neighbours in the building next to ours is Syrian. He has been living alone for some time while the rest of his family stayed in Syria. A few weeks ago, the situation in their hometown in Syria worsened so he brought them here to be in safety and escape the war. But they didn’t escape death. The walls crushed them when the blast hit, and his wife and two daughters died. If you see him now, it’s like he has gone mad.

“We need everyone’s help to rebuild the streets of Beirut”

We have a lot of needs now. Our windows, curtains and furniture are all damaged. The shattered glass destroyed everything and the walls have crumbled. My kitchen is not functioning and the water pipes are all broken. We need our homes to be repaired urgently but we can’t afford the repairs. We don’t know when we will get assistance, but we need everyone’s help to rebuild the streets of Beirut.

Also, some people might laugh at me, but my sons and I lost our TVs and I can’t afford to get a new one. But it is important to have a TV because it is the only way I can follow the news to keep myself updated about what is happening in the country.

My husband died when my children were very young, and I raised them as a single mother. I put all my heart and effort into raising them and keeping them safe. My biggest fear is that I might lose them now when they are adults. They are all I have and if something happens to them I wouldn’t know what to do. The situation in our country has become unbearable. Our hearts are broken, the people are tired. Lebanon has suffered enough.

Support our emergency response in Beirut

Support our work
The people of Beirut need our help: your donation will help thousands of people made homeless with emergency shelter and urgent essential aid.
Select monthly amount
Choose amount
Choose amount
You can contribute anonymously, but please note that you will not get a receipt if the email field is left blank. If you fill in your email address or phone number, we will keep you informed about future humanitarian crises.
Our terms and conditions, including privacy policy statement
Support our work
Personal details:
Name
Surname
Select payment method