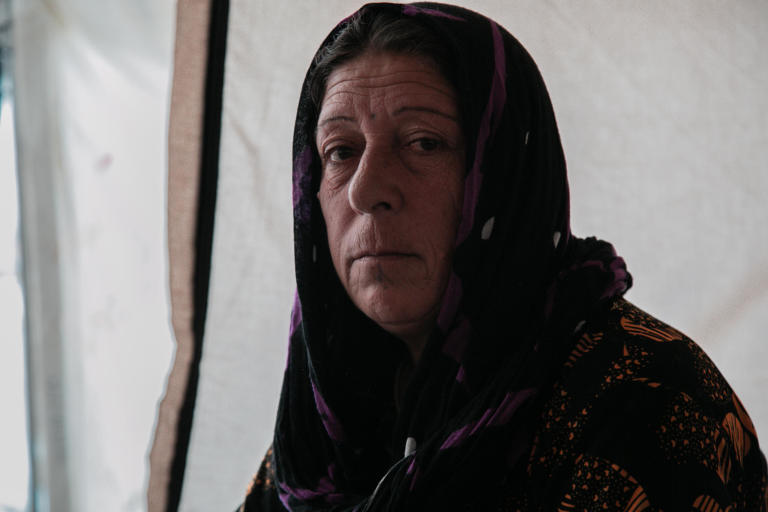 Published 15. Jan 2020
Syria Syria crisis War and conflict
“My house was burnt down, and the original people of my area have left. Even if I had to eat soil here in the camp I would never go back to Syria.” Sorya, 55, fled from her home in north eastern Syria at the end of 2019 following Turkey’s deadly military operation. She now lives in a refugee camp in northern Iraq. The Norwegian Refugee Council (NRC) is providing emergency assistance to people like Sorya whose homes have recently been destroyed.

Sorya is a grandmother from Ras Al Ayn in north eastern Syria. She has been displaced three times during the eight years of the Syrian conflict. But this time her reasons for fleeing were more horrifying than ever, forcing her to flee the country.

“We saw people burning in front of us,” she said. "We escaped running over their dead bodies.”

She fled with 23 people. There were women, young men and children. Many were members of her own family.

All roads were subject to indiscriminate shelling. There were no safe routes for civilians to escape.

“At the border, we walked for around six hours. We were so scared that IS group or anyone else would attack us. All of these children were with us without water and food.”

Without any other option, the group had to resort to smugglers to reach safety in Iraq.

“On the way, we did not know who we were dealing with. Even men started to get scared because we no longer knew where we were going.”

Many refugees hope to return home after their displacement. But for some, the horrors that they have witnessed, combined with recurring dangers, prevent them from doing so.

A study conducted by NRC in Bardarash Camp, where Sorya now lives, found that 95 per cent of the refugees residing here don’t think they will return to their homes in Syria. Instead, they plan to remain in Iraq.

This is a sentiment shared by Sorya.

“Where would I go if I had to go back? My house was burnt down, and the original people in my area have left. Even if I had to eat soil here in the camp I would never go back to Syria.”

This confirms the widespread fear, suffering and desperation which engulfed the north eastern region of Syria since Turkey started its military operation in October 2019.

The Turkish military operation began on 9 October 2019 when the US announced the withdrawal of their forces. It involved aerial bombardment, artillery shelling and ground fighting. It has forced more than 17,900 Syrians to flee into Iraq.

Refugees told us of harrowing journeys, fleeing shelling and troop advances. Being forced to trek long distances across the hilly border in the cold at night. Many families were separated during these difficult journeys.

“On our way, airstrikes hit somebody in front of my eyes. His head was ripped off his body. I could only see his head. The body was missing.”

Ali*, 25, an aid worker from Ayn Issa, also fled at this time. For Ali, the day the military operation began was a typical working day, until he received a phone call about an explosion in nearby Ras Al Ayn. A phone call that turned his life upside down.

“I was living a normal life in Syria working with displaced people during the day and going back to my home at night. I never thought that one day I will be displaced and seek refuge in another country.”

Help at the border crossing

Civilians fled with just the clothes of their backs, with nothing to eat or drink throughout the challenging journey. NRC was at the reception sites to provide new arrivals with drinking water and other basic items.

In the newly-established Syrian refugee camps, we have been distributing essential items for infants and ‘hygiene kits’ for families. We have also installed communal heaters in preparation for the cold winter months.

For those with no option but to remain in the camp, we have established an informal school so that children have a place to learn and look toward the future.

Read our full report about the situation for Syrian refugees in northern Iraq.