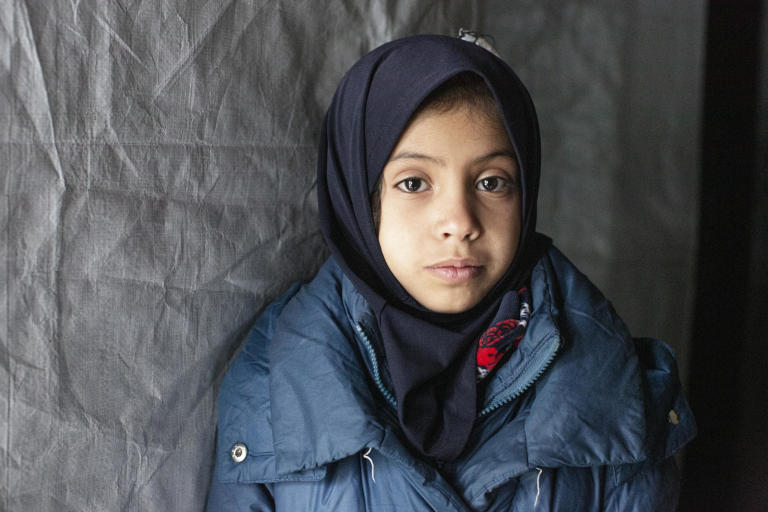 
A tent is all ten-year-old Malak has ever known

“Mum and dad tell us how it was in Syria. How we had a country. I wish I could see our home and our farm,” says Malak, 10. She was just a year old when her family fled Syria – the start of nearly a decade of living in a tent.

In Syria, the family owned a big house with a garden. There was a kitchen and room to receive guests, which is typical in Syrian culture. They also had a small farm with a cow they milked to feed the children. “We were just living,” says Malak's mother, Umayya. “And we were happy.”

It was near the start of the war, 2011, when the family’s lives were turned upside down. When the bombing started, they weren’t sure who was responsible or where it was coming from. Umayya remembers that the walls of her home began to crumble every time a bomb hit nearby. She felt they were trapped from all sides.

Malak was a year and a half old at the time. Her younger sister Amira had just been born. Umayya and her husband felt they had no choice but to leave their home and head to Lebanon to keep their young children safe.

Since the beginning of the Syrian war, families have been crossing the border into Lebanon to seek safety. It’s a densely populated country, and now, one in four people in Lebanon is a refugee.

Bekaa Valley is an upland area in the east of this small Middle Eastern country. With no other option, thousands of families began settling here in what are known as “informal tented settlements”. The Government of Lebanon considers refugees’ stay in Lebanon as temporary and does not allow them to construct permanent structures where they live. In 2019, Lebanese Armed Forces demolished shelters in different areas in Lebanon.

Despite this, many of the families, like Umayya’s, have now lived in these tented settlements for several years. Everyone here has something in common: they have been forced to leave their home behind to live in a tent. This shared experience means that everyone looks out for one another.

“Our neighbours here are good people. Everyone gets along,” explains Umayya. “We look out for each other. We work together to keep the camp clean. If I have a problem, people come and ask: ‘Is your husband okay? Are your daughters okay? Are you okay?’ Thank God, there are no problems here.”

Trying to make the most of a tented home

It’s been a slow process, but gradually Umayya has been able to make their tent slightly more comfortable.

“It was the same one room, but slowly, slowly, we started to build on it. So, for example, we’d expand the kitchen. Or fix up a rain cover during the rainy season to try and keep us dry. We put out flowers,” she shares with pride.

“It has a little something of us now. When my husband has some work, we do things up a little. Bit by bit, we’re putting our stamp on it. You work hard, you clean it, you fix it up. It makes you feel better. Even if it is a tent and not a house – you feel better.”

Umayya is making the most of the small structure, but she dreams of having more space. “You know, there is a disease in the air. I’m really afraid for my children. We have to make a room for them so it’s a bit less stuffy.”

“I just want to know that in winter, my children won’t have their home flooded. That they will be warm. I don’t want more than that.”

Waiting for the storm to pass

The winters are harsh in Bekaa, and the camps are prone to flooding. The night before we spoke to the family, a thunderstorm had terrified the children.

“We were really scared,” shares Malak. “We held onto our mum.”

Umayya put on a brave face for the children but told us that she was not as calm as she had made out: “I told them not to be scared, that this was just the early winter thunder. But when you’re sitting in it, you feel like something is lit up. It’s really strong.”

In a well-insulated house, it’s easy to shut the winter cold out. In a tent, it’s a different story.

“In the winter, we suffer a lot,” says Umayya. “Last night it was freezing. I wrapped each of my children in their own blanket. And thank God, the night passed.”

Next year, it will be a decade since the family fled their home. A decade of living in a tent. Umayya desperately wants to return to their old home in Syria. She wants her children to be able to put down roots, to go to school, and to feel at home.

“You don’t forget your homeland, whatever happens. We think about going back to Syria, about our children going back. We want them to know what it’s like to have a thing that’s theirs.

The Norwegian Refugee Council (NRC) believes that families living in a home away from home deserve protection and dignity. We provide and maintain the toilets in this family’s camp, as well as tools for home maintenance and cleaning, and clean water.