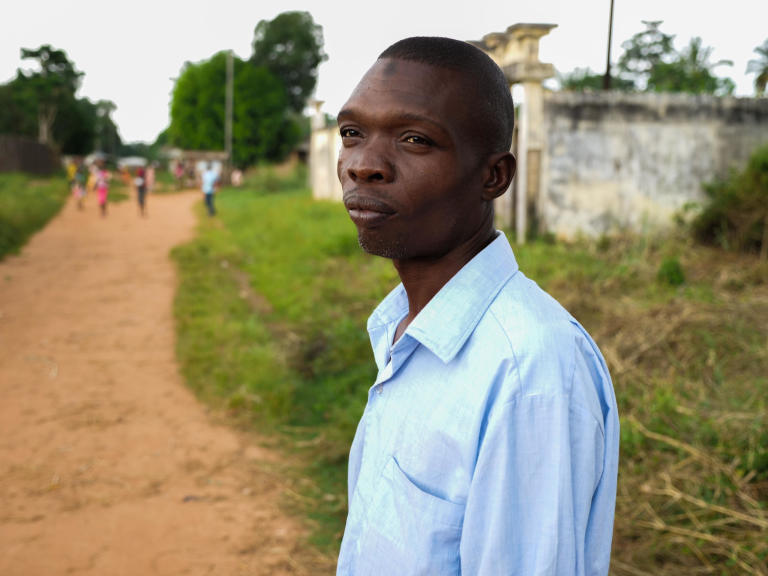 
A family was living in my house

By Itunu Kuku Published 18. Apr 2020
Central African Republic Housing, land and property (HLP) Return
Read caption Hamayadi was devastated to find a family living in the home he had built for his family with his own hands. Photo: Itunu Kuku/NRC
Damaged windows, a broken door, and an unknown family living in his house. This was not the welcome Hamayadi Youcouda, 45, had imagined when he made the decision to return to his hometown in the Central African Republic (CAR) after five years as a refugee.

In 2014, as violence gripped his country, Hamayadi was forced to leave his hometown of Berberati. He had to abandon the life he had built for himself in order to seek refuge in neighbouring Cameroon. After spending five years in Cameroon at a refugee camp, he heard consistent reports that calm had returned to Berberati. He eventually made the decision to return home with his family, but what he found on his return was not at all what he had hoped for.

Life as a refugee

Five years ago, Hamayadi, his wife Roukaya, 37, and their daughter Awaou, 9, made the 115 km journey from Berberati to the Cameroonian border town of Kentzou to reach safety. At the border, they were met by workers from the UN Refugee Agency (UNHCR) who took them to a camp. Whilst living there his wife gave birth to two daughters – Oumou, now 4 years old and their youngest, Ashé, who is only 11 months.

Life in the camp was tough. In Berberati, Hamayadi had made a good life for himself and he constantly longed to return to it. Back in Berberati he had provided for his family by transporting kerosene, petrol and diesel from a distant gas station to sell to his neighbours. This meant he was able to build a house and even buy a small mill so his wife could grind maize and millet to sell the flour. In the camp, they had to rely on handouts.

“Every day we would pray for things to be safe enough to return home,” Hamayadi recalls.

Hamayadi recounts that a few years ago a small number of people started to make the journey from the camp back to Berberati. They would cross the border to visit relatives back home and return with news that stability was returning. When Hamayadi heard these stories his heart filled with hope. It wasn’t long before he approached camp staff and requested to return to his home country.

“I was tired of staying in the camp,” he explains. “Even if the reports of peace were not true, I was still ready to return home, even if it meant dying there. I needed to go back home.”

Upon arrival in Berberati, Hamayadi felt safe and was happy to be back. There was only one problem. Another family was residing in his house. It was painful for him to see the house he had built with his own hands in someone else’s possession.

Negotiating with the occupants

“This isn’t what I hoped for when I decided to return. It wasn’t meant to be this way,” says Hamayadi.

Hamayadi didn’t know what to do. He decided to approach the village chief. Fortunately for him, the village chief, Amadou Ibrahim, was also the president of Berberati’s Community Mechanism for Social Cohesion. This group had been set up by the Norwegian Refugee Council (NRC) and we had supported it with training in peaceful negotiation techniques. The group was made up of local authorities whose role it is to address conflicts related to housing, land, and property involving former refugees who had returned to CAR from Cameroon.

Using the techniques he had learned from NRC, Amadou went with Hamayadi to his house and spoke with the family living there. After listening to the village chief, they declared they would leave the house but only if they were to be financially compensated. The village chief explained that he would not be able to give them any money. He explained the judicial process and told the family occupying Hamayadi’s house that the law was not on their side. They eventually left the house.

Hamayadi is now back in the house that he built with his family.

In Hamayadi’s case, the negotiations with the family living in his house were ultimately successful. In some cases the negotiation is not always this simple.

Mariam Bouba is a 44-year-old mother of seven sons. Like Hamayadi, she decided to return to Berberati after living as a refugee in Cameroon, only to find another family living in her house.

Too afraid to confront the family on her own, she went to her house accompanied by Amadou. When they arrived, they found a very old and poor couple living there. The couple was so vulnerable that she and the village chief did not feel comfortable telling them to leave. They have not been able to find a solution. In the meantime Mariam lives in Berberati with her sons in a room that the village chief provided for her.

Though happy to finally be back in CAR, both Hamayadi and Mariam have learned that returning home is only the beginning of a new challenge. They will need assistance to settle back in and to rebuild their lives. Our teams are providing legal assistance for returnees, particularly with regards to land, housing and property, so that those who fled their homes will be able to reclaim them.

As Mariam’s case highlights, the process of reclaiming your home after displacement is complex. In some cases the secondary occupants of these houses are vulnerable victims of the same conflict with nowhere else to go.

Read more about our work in the Central African Republic