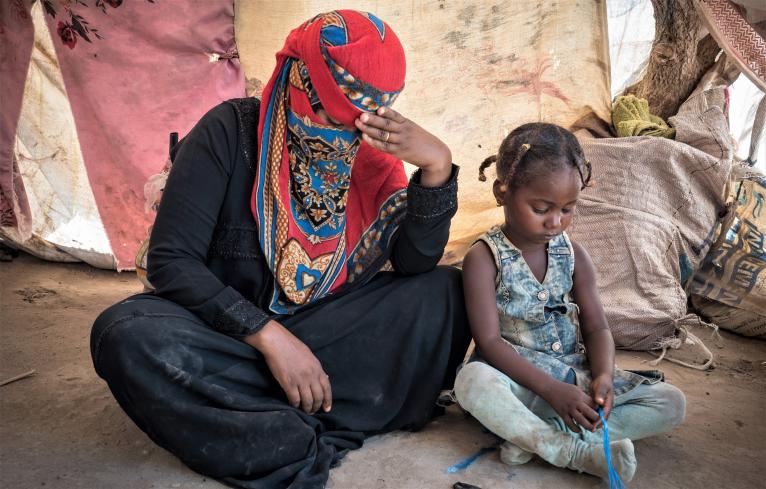 The hard life in displacement:

Kristine Kolstad Published 24. Apr 2019
Yemen Gender Internal displacement Neglected conflicts War and conflict More than a number
Read caption What is it like to be a young mother and displaced in Yemen? Photo: Ingrid Prestetun/NRC
The sun is roasting through the thick layer of sand that has settled in the air. It’s only February, but the temperature is getting close to 30 degrees. Inside the tents, the heat is almost unbearable. In these conditions live widowed Ahlam, 27, and heavily pregnant Rana, 20.

What is it like to be a young mother and displaced in Yemen?

“There were heavy clashes near our house, and we couldn’t go out to fetch food or water.”

Ahlam welcomes us in her tent in Al-Garad, one of the many displacement camps in southern Yemen. Her voice cracks.

“One day my husband went out to his regular work in a construction site. A number of bullets hit his body and took his soul from us.”

Inside the small tent, her youngest daughter, Adyan, cuddles up in her mother’s lap.

It’s been just over a year since Ahlam took her four children and fled their home city Taiz. “While fleeing, I was afraid that bullets and snipers in the mountains would kill us if we got too close,” she says.

Eventually they arrived in Al-Garad displacement camp, which was established in 2016 and houses almost 60 displaced families. Although the Norwegian Refugee Council (NRC) and the World Food Programme (WFP) have distributed some food in the camp, the people in the camp still suffer from a lack of food.

Ahlam sometimes goes hungry for days so that her children have enough to eat. “I did not expect that my life would take this tragic turn and I would be left alone to care for myself and my children,” she says. In addition to the lack of food, there’s only one water tank in the camp where the residents can get clean water. There’s always a long line. Ahlam’s two oldest daughters, eight-year-old Taypa and ten-year-old Fatima help their mother fetch water and firewood.

Ahlam dreads the upcoming summer. Fiery winds will make the air denser and life in the camp even more difficult for the young family, and it will be almost impossible to move outside under the scorching sun.

Another mother who is worried about the summer and the heat that comes with it is 20-year-old Rana, who lives in Al-Mishqafa, another camp in the area. She’s experiencing heat waves and dizziness - and is eight months pregnant.

In the camp, we’ve built tents and latrines for hundreds of families. But the conditions in the camp remain harsh: It’s cramped, and there is no sound proofing between the tents. The heat is almost unbearable, it’s windy, and the air is sandy. There are insects, snakes and scorpions.

The people in the camp lack many things: “We need more food and water, as well as fans. I don’t know how we’ll survive this heat without,” says Rana. Al-Mishqafa camp is located in the desert, and the heat is already extremely uncomfortable.

It’s been two years since Rana, her husband and their extended family arrived in the camp. “The clashes were getting closer to our house, and eventually bullets entered the house. We stayed a week without food as we feared coming out of the house. My aunt was hit by a bullet in her stomach, which forced us to leave our home,” she says.

Rana is happy that she has her family close, although everyone has their own problems to worry about. Her one-and-a-half-year-old daughter Hayam is struggling with a nasty cough and malnutrition. Her husband works on various construction projects to feed the small family. Much of his pay goes to procure medicines for Hayam.

Due to the pregnancy and the heat, Rana is often dizzy and throws up a lot. She’s dreading the birth of her second child. There are no midwives or nurses in the camp. No specialists who can help with the delivery.

She is displaced and a mother-to-be for the second time in war-torn Yemen.