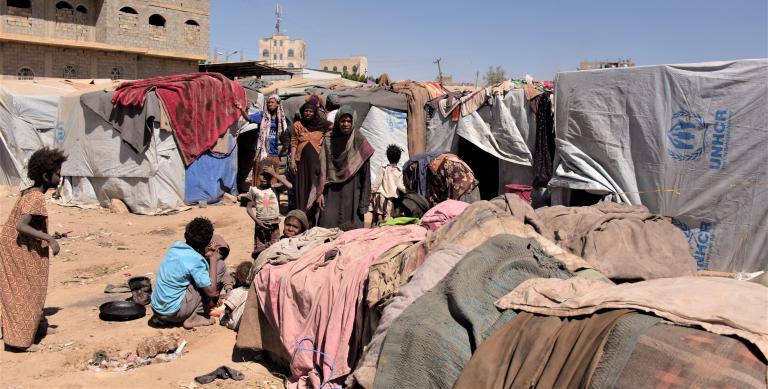 THE WAR IN YEMEN:


10 things to know about the crisis in Yemen

Roald Høvring Published 22. Feb 2019
Yemen War and conflict
Read caption 28 January 2019: Displaced Yemenis gather outside their tents in a camp for displaced people in Amran, next to the Night Market. Hundreds of displaced people are living in miserable conditions in this overcrowded camp. Photo: Karl Schembri/NRC
Yemen is described as the world's worst crisis. After four years of catastrophic conflict, millions of Yemenis are just one step away from famine. Without life-saving aid in the coming months, thousands of lives are at risk due to ongoing violence and lack of access to food and medicine.

To avoid more deaths and suffering we must continue to scale up humanitarian assistance, donors should give more money, the use of blockade and restrictions on food fuel and medicines must be lifted, and we must see an end to the war.

The success or failure of the UN negotiated ceasefire and peace talks will be critical for the future of Yemen when the crisis enter its fifth year.

Here are 10 things you should know about the crisis:

Four years into the conflict, the scale of destruction in Yemen has reached unprecedented levels: conservative estimates show that at least 17,700 people have died as a direct result of the violence. Many more people may have died from hunger and diseases.

The Armed Conflict Location & Event Data Project (ACLED) recorded over 30,000 deaths in Yemen last year stemming directly from the conflict — an increase of more than 82 per cent in total reported fatalities from 2017.

#2: Attacks on civilians and civilian infrastructure

Every day Yemeni civilians continue to be killed and injured in their homes, cars, buses, farms and markets.  Houses, schools, hospitals and water tanks continue to be destroyed and damaged by all sides in this conflict. With air strikes inflicting the most damage.

The UN has accused all parties to the conflict of carrying out attacks on hospitals, schools and markets and from preventing aid from reaching civilians.

“
Yemenis also need to see an end to blockade, all ports and airports reopened, public services restored, and a nation-wide ceasefire so that talks can bring an end to the conflict. This is the only way to break the vicious cycle of human suffering.
JAN EGELAND, Secretary General of the Norwegian Refugee Council

Before the escalation of the war in Yemen, the country imported 90 per cent of its staple food and nearly all its fuel and medicine. After the war escalated in March 2015, border crossings, airports and harbours have been closed intermittently.

Food insecurity is most severe in areas with active fighting and is particularly affecting IDPs and host communities, marginalized groups, fishing communities and landless wage labourers.

Millions of Yemenis are hungrier, sicker and more vulnerable than a year ago, pushing an ever-greater number of people in to seeking humanitarian assistance to survive.

Of the country’s 29 million inhabitants, 24 million people need some form of humanitarian or protection assistance, including 14.3 million who are in acute need. Severity of needs is deepening, with the number of people in acute need is a staggering 27 per cent higher than last year.

The war has led to inflation, unemployment and lack of salary payments, as well as an acute shortage of fuel, food and medicine. More than 81 per cent of Yemenis now live below the poverty line, without access to clean water or adequate sanitation.

Very few Yemenis have any source of income, meaning many can’t cope with the price hikes. At least half a million civil servants have received no salaries for nearly three years. Since 2015, the economy has shrunk by half.

In 2019, displacement is anticipated to continue in proportion to the intensity of conflict, with partners projecting that between 500,000 and 1.2 million people will be newly displaced depending on conflict dynamics.

177,000 people have crossed Yemen’s borders into neighbouring countries in search of protection since the conflict escalated.

The country’s geography and conflict dynamics restrict the options of people trying to flee abroad, people are penned in by the ocean and the desert, with only Saudi Arabia, and Oman as direct neighbours, Yemen is surrounded by extensive and highly insecure terrain to the east, its neighbouring countries are reachable only via a perilous sea journey to the south. The country’s main airport has also been closed to civilian traffic since August 2016.

Because of collapsing public institutions, people’s access to essential services such as water, sanitation, health care and education has been further constrained. Only 50 per cent of the total health facilities are functioning, and even these face severe shortages in medicines, equipment, and staff.

Collapse in the public sector is increasingly pressuring humanitarian organizations to compensate for the absence of government spending, which goes beyond their mandate and capacity to respond.

Lack of wages and medication has led to the collapse of public health services, and few can afford private health services. Lack of vaccines and medicine has caused many, especially children, to die from easily treated diseases. A Cholera outbreak that began in 2016 is still affecting the country. More than 1.4 million people are believed to have been infected, and over 2,870 have died since April 2017 to end of 2018.