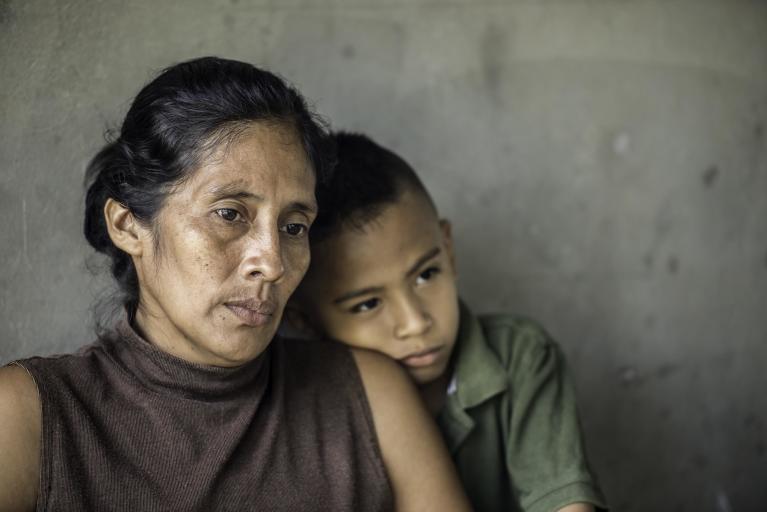 
When violence has taken control

Suzanna Nelson-Pollard and Kristine Grønhaug Published 16. Aug 2019 Edited 15. Aug 2019
America Honduras
Read caption To keep children and youth away from the streets and thus prevent them from being recruited to criminal gangs, “Elena” organized leisure activities in the neighbourhood. But gang members killed her son. Today she lives in sadness at a secret place in Honduras. In this photo she is with her grandson, “Julian”. Photo: Ana Karina Delgado Diaz
A number of neighbourhoods in Central America are controlled by violent gangs. Here, it is so dangerous that the authorities can’t even run schools or medical centres. It’s also difficult for humanitarian aid organisations to reach people in need. To do this, we need to think strategically and gain acceptance from both the communities and the gangs.

Human history has a long tradition of people joining together to travel in large groups.  Caravans can provide protection against attacks and other risks.

In the late spring of last year, a couple of hundred people joined together and walked as a group from Honduras to the border area between Mexico and United States.

A few days later, in October, the media showed images of what they called a “migrant caravan”. It started in the city of San Pedro Sula in Honduras and grew large, as thousands of people joined in along the way.

The neighbourhood in Honduras is ruled by six criminal gangs. Here are ten things you should know about the violence in Central America.

In Honduras, according to NRC data from the deportation centre in San Pedro Sula, people are fleeing their homes because of:

Since then, the caravans have encountered ever-increasing obstacles, such as stigmatisation, police arrests and deportations. To avoid this, they have started to form smaller groups. However, on 15 January 2019, a larger group of people from San Pedro Sula decided to set out on the long journey north.

Lack of will from authorities. Criminals who go free. People in power with ties to the gangs. There can be many reasons why people don’t trust those in power. Nor does it help that there is almost no place where you can apply for help if you need it.

Poverty, the dream of a better future for themselves and their children. These are good reasons to simply get up and go.

But when a large number of Central American migrants are asked why they left their homes, many talk about war-like conditions. They tell appalling stories of sexual assault, violence, threats, murder, extortion and child recruitment to criminal gangs. They live in constant fear and insecurity.

“Yoselyn” was just 15 years old when she was kidnapped by a gang that was planning to kill her.

The murder rates and impunity rates in Honduras and El Salvador are among the highest in the world. The criminal gangs are known in Spanish as “maras” and “pandillas”. In an interview with NRC, “Elena”, a single mother from Honduras, told us about her encounter with them. And about how they eventually shot and killed her 18-year-old son, “David”, for refusing to sell drugs.

She says that the gang worked strategically to take over their neighbourhood. Children and young people said they were offered money and new clothes. Elena says that because the children come from poor families, it was tempting for them to accept these “gifts”. But then they can end up being trapped.

Elena worked as a volunteer in an effort to provide young people with activities to keep them from being recruited by criminal gangs. But she felt threatened and feared for her life. Read Elena’s story here.

Fearing reprisals from the gangs, many try to stay as anonymous as possible and therefore don’t seek help from authorities.

Rather than going to people’s homes, many humanitarian organisations prefer to help people from their offices or from schools and community centres.

Because of the violence present in many communities, humanitarian organisations face great challenges. Normal humanitarian rules and laws don’t apply here. Often to gain access to those who need help, we must negotiate to get access. But it is extremely risky and it doesn’t always guarantee that our staff enter or stay in the neighbourhoods.

In addition, there are other restrictions. For example, a nightly curfew. Or that you have to know  that certain words that are taboo. And whenever there has been a murder or violent attack, or when the police undertake anti-gang operations, humanitarian aid organisations must stop working and leave the area.

“Maria” and her family were displaced by a criminal gang. In desperation, she left her children to travel with human traffickers to the United States. Read her story here.

Different gangs rule over different areas in the same neighbourhood. The boundaries are invisible and it can be dangerous to cross them.

A new joint report by several humanitarian organisations shows that only five per cent of these organisations can move across these boundaries. The report highlights the best experiences from the organisations’ work in these areas, as well as how to improve access to the population. The work was led by NRC, and was an initiative of the regional protection group REDLAC with support from UNHCR and AECID.

Read more about the children in one of the world’s most dangerous neighbourhoods here.

Imagine a life where all you are forced to leave. And this goes on for days, weeks, months and years. So why haven’t you just left?

Previously, there were two ways to travel, and both involved great risk. You could either set out alone – and risk the treacherous route alone – or you could pay a network of human traffickers up to USD 10,000 (NOK 88,000).

Whichever one you choose, there is a great risk of being kidnapped, murdered, abused and exploited by organised criminals, by drug cartels or by police and soldiers.

So, one day you might see a post on Facebook, a news report or a photo in a WhatsApp group – where you see people are forming groups to leave the area.

That’s the solution, you think. You pack a small bag, go out on the road and wait for the caravan to get to where you live. Or you make the journey to the caravan.

The countries of Honduras, El Salvador and Guatemala are called the North of Central America. The fact that more and more people from this area continue to join migrant caravans shows how unbearable the situation is for people living in this region.

From 13 October to 15 December 2018, between 12,000 and 16,000 people, divided among five caravans, crossed the border between Guatemala and Mexico. Forty-eight per cent came from Honduras and 39 per cent were from El Salvador.

Every day, at least one special aircraft lands at an airport outside the second largest city in Honduras, San Pedro Sula. The plane comes from Houston, Texas. The passengers are Hondurans who risked everything to get to the United States.

Now, they are being sent home again – to poverty and violence.

Humanitarian response should be geared towards the phenomenon of violence related to criminal gangs and tailored to meet the needs of those most vulnerable in the NCA counties. We must provide better options for people besides seek safety and opportunities outside the country.