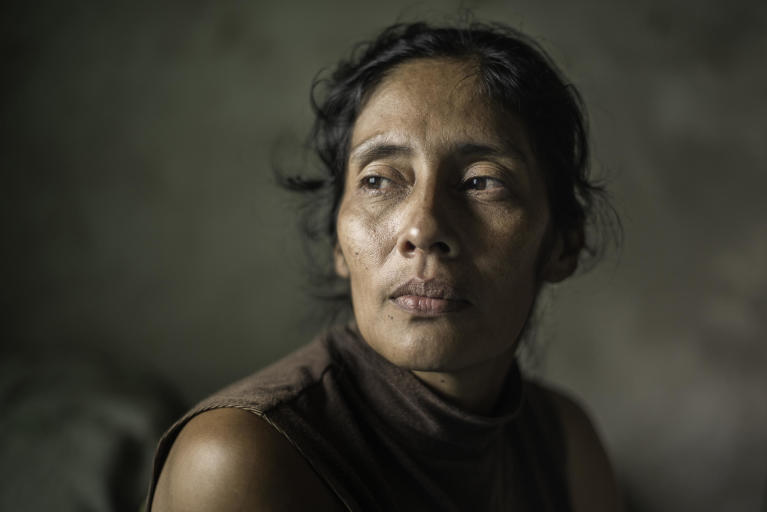 Kristine Grønhaug Published 07. Sep 2018 Edited 05. Sep 2018
Honduras Security Youth
Read caption When "Elenas" son "David" refused to sell drugs for gang members in the neighbourhood, they killed him. Her grief is a heavy burden to bear. (We gave her an anonymous name for security reasons). Photo:Ana Karina Delgado Diaz/NRC
A criminal gang wanted "Elena's" son to sell drugs. He refused. On August 23, 2016, he was shot ten times and killed. "David" only made it to 18 years old. "Elena" wants people to know. This is her story.

Names and places are changed due to security reasons.

This is what "Elena", 46, is left with after her son "David" was killed; An embroidered napkin that he once made for her with the words "I love you mom", as well as three photographs in a frame, one with him as a teenager, and two where he is a baby. She is also left with so many memories.

We sit with her on some plastic chairs out in the garden.

“I have always worked for my children. All I have done, I have done for them. I separated from my husband when I was pregnant with my fifth child. To support the kids, I sewed clothes and sold homemade tortillas and donuts”, she says in a calm voice.

“We lived in my hometown, Tegucigalpa (the capital of Honduras), which has now evolved into an almost completely violent city. In 2011, some parents and I started volunteering to improve the living conditions for the children in our neighbourhood. It was a state program for children and youth. We started various workshops in subjects including data, mechanics, electronics, painting and carpentry. One of my sons joined the project, he learned how to create and design shoes.

It went so well that the program was expanded to six other neighbourhoods, and I was asked to lead it. We specifically tried to include children and young people who had dropped out of school. For two years work on the project went well.

"But in the 3rd year things changed. Gang members began moving into our neighbourhood. Several of them had tattoos, something that was more common then than it is now." " (The gang takeover) happened fast. About 2.5 years ago there were criminal gangs in only some parts of our city. Our neighbourhood was quiet and safe. I had lived there for almost 25 years without seeing or experiencing any violence, but then the gangs began to take control. They operated strategically, acquired territory piece by piece. They went into even the most remote neighbourhoods."

"Elena" laments the descent of her neighbourhood into a gang crisis.

"I talked to children who told me that these gang members had offered them money and nice clothes. These kids are from poor families, so this was a tempting offer. I began to notice that some of the youths in the program suddenly became passive during class. Eventually they stopped coming. Gradually, the gang controlled everything."

"I began walking around with the feeling that somebody would kill me. I had not received any threats, but I had a feeling. After about six months, I stopped working with the kids. The program was shut down.

It became increasingly easier for the gangs to recruit new members among the youth who now had nothing to do. Generally, people felt threatened. In addition, a young person had been killed.

The gangs had bags of cocaine and marijuana that they gave to young people, with instructions to sell the drugs. Those who refused were killed. From March to June of 2016, they killed 35 young people between 14 and 21 years old. They could do this because the authorities never intervened.

“
Our neighbourhood was quiet and safe. I had lived there for almost 25 years without seeing or experiencing any violence, but then (2.5 years ago) the gangs began to take control.
“Elena”, mother of “David” who was shot dead.

I decided I needed to start the program up again. We began the first week of July. From then on, our house was monitored by gang members.

Some quiet weeks without any murders followed. But at the end of July they began again.

"A 15 year old friend of my son who lived near us, had been told to sell from a bag that had been left in his home. He was threatened with his life. His parents chose to try to illegally enter the United States. When the gang members discovered that they had travelled, they opened fire on their front door to send a message.

They found another youth, but he refused to sell. They killed him."

"On Tuesday, the 23rd of August, I asked "David" to go to the store to buy cheese for us. When he returned, I saw that he was nervous. 'What happened,' I asked. 'Nothing,' he answered. I noticed that he was closely monitoring his cell phone.

We sat down for dinner, but he did not want any food. Afterwards I did a little sewing. When I finished, I went to him in his room and asked why he had not eaten anything. He replied that he was not hungry. He seemed absent and was only preoccupied with the phone. I thought something was wrong.

Later in the evening, he explained: "I met the garbage" - he meant the local gang. "They said that if I do not sell drugs, they will kill me. I replied that I'm not going to sell anything, because I'm a Christian. Then they said, 'Good, you will get to heaven if you die'," says "Elena", who breaks down crying before she continues the story:

"I did not have enough money to send "David" to the United States. So I could do nothing but tell him that he had to stay inside."

Afraid for his safety

I woke up around 5:30am the following morning. I left home an hour later to walk my youngest daughter to the bus. When I returned home there were two gang members close to our house.

Around 9am, only "David", my grandson "Julian" and I were at home. "David" helped me hang the laundry when my daughter called and said that she had forgotten to bring a drumstick to school. She asked if I could bring it to her.

I heated up some milk. When "David" entered the kitchen, he asked for a little, just like he used to when he was a child. It was so strange. I think he felt something was going to happen to him.

He drank the milk while I got ready to deliver the drumstick to my daughter. I asked what he was going to do. He said, "Stay in." I asked if he would rather join me because I was afraid for his safety. He replied, "They will not do anything to me now. They kill people on the street, not in their homes."

After seeing my daughter, I went to the store. At 10:20 the phone rang. It was a neighbour: '"Elena", where are you? You must come home, something has happened.' There were a couple of calls, they all said the same thing, but nobody told me what had happened. A boy who used to help with the program called too: 'Your son has been killed by the man with the tattoos.'

My grandchild, "Julian", was not home. I was afraid that they had taken him. We discovered though that he had hidden right outside the house.

Afterwards, I learned that "David" had ordered "Julian" to go out.

After "David" was murdered, "Elena" and her four surviving children - aged 28, 25, 22 and 15 - plus her grandson Fernando, now 5, had to escape from the neighbourhood to avoid being killed.

Our team helped the family find a new place to live, at a secret address. In addition, we have helped them with financial assistance during their attempt to begin again. They now have a small family business, so they can support themselves. With a crank operated sewing machine, “Elena” sits at home and sews dresses and fabric shoes that her children sell to stores and others.

Through our program, we identify people who need help.

We move families who need protection to safe neighbourhoods. Our operation has been a strong advocate for the safeguarding of the rights of people who are internally displaced.

We are one of five organizations that, together with ten representatives from the Honduran authorities, participate in a commission. The objective of the commission is to develop a national legal framework for internally displaced people. This framework will be based on international standards. When the laws come into effect - scheduled to happen in 2018 - people like "Elena" and her family will be guaranteed assistance from Honduran authorities.

For people like "Elena" and her family who have been displaced from their homes, we provide an initial 3 months of funding for them. With this, they are able to buy food, clothes or other things they need.

During this time, the family must find alternative ways to provide for themselves. We see cases where people have managed to save a lot of the money that they have received from us and started their own small businesses. This was the case with "Elena".

In some cases it may be too dangerous for people to stay in Honduras. In order to help them leave the country, we cooperate with the UN High Commissioner for Refugees (UNHCR). We have built a network in other countries that can accommodate refugees and support them there.

Our teams only provide temporary assistance to people who have been displaced. It is a challenge that Honduras has not established lasting solutions to help the people who are subject to displacement. For example, it is crucial for people to get jobs so they can support themselves and their families.