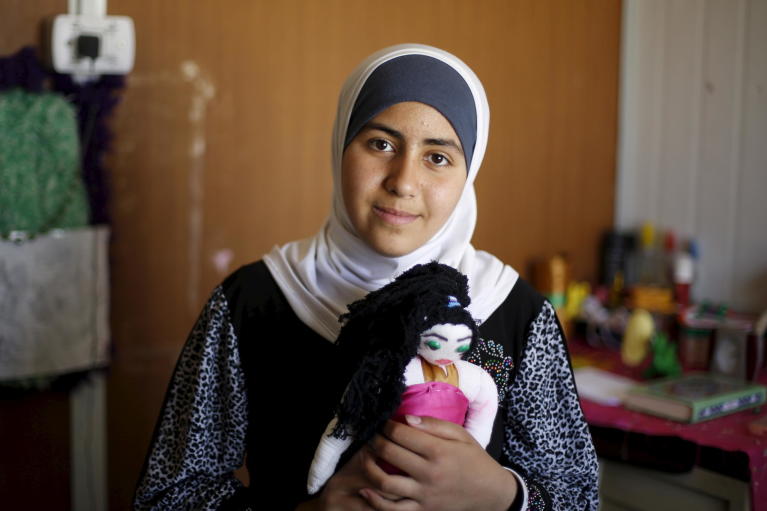 
What you need to know about Syrian child marriage

Roald Høvring Published 11. Feb 2019
Syria Protection
Read caption AGAINST CHILD MARRIAGE. Syrian refugee Omayma al Hushan, 14, launched an initiative against child marriage among Syrian refugees after her friend was married at the age for 14. Here she poses with her favourite toy at her residence in Al Zaatari refugee camp in the Jordanian city of Mafraq, near the border with Syria. Photo: REUTERS/Muhammad Hamed/NTB Scanpix
Millions of people have had their lives torn apart by the devastating civil war in Syria since it began in 2011. Alarmingly, the conflict has made Syrian girls more vulnerable to child marriage.

Many countries ravaged by war and violent conflicts have a tradition of girls marrying young, but when families are displaced, it increases the risk of more girls getting married at a very young age. Today, we see that the number of child brides is increasing dramatically among Syrian refugees.

Read the story about Syrian Dima married at 13.

These are the key facts, first presented by Girls Not Brides:

# 1: A growing number of Syrian refugee girls are being forced into arranged marriages because of the conflict.

Child marriage is a growing problem for Syrian girls living in refugee communities throughout Jordan, Lebanon, Iraq and Turkey. In Jordan, for instance, figures show a marked increase over several years. In 2011, 12 per cent of registered marriages involved a girl under the age of 18. This figure had risen to 18 per cent in 2012, 25 per cent in 2013 and 32 per cent by early 2014.

In Lebanon a survey in 2016 shows that 41 per cent of young displaced Syrian women between 20 and 24 years were married before they turned 18. Given that many marriages are unregistered, these figures may, in fact, be understating the actual rates

Girls who have been displaced inside Syria are likely facing similar problems. There is currently, however, limited data about the situation inside the country.

# 2: Child marriage happened in Syria before the conflict.

Child marriage is not a new phenomenon in Syria. Before the conflict, 13 per cent of Syrian women aged 20 to 25 were married before the age of 18. Conflict and disasters compound the pre-existing poverty, gender inequality and lack of education that cause child marriage to happen in the first place. This underlines the importance of addressing child marriage during times of relative stability, before crises hit.

# 3: For Syrian families, marrying their daughters is a desperate response to extreme circumstances.

Life is difficult for displaced families; Parents struggle to provide for their children and fear for their safety, especially that of young girls and the threat of sexual violence against them. As a result, some come to the conclusion that marriage could protect their daughters from harm while also providing them with a level of financial stability.

In many communities, marriage is also a way to “protect” a girl’s virginity and “honour” and, by extension, a family’s reputation. This prevailing norm underscores the climate of gender inequality that exists in these environments, as these concerns rarely apply to boys and young men.

According to Save the Children, some girls are also married off to facilitate the entry of Syrian men into Jordan, a process easier for married men. Girls who marry Jordanian husbands may also be able to get sponsorship allowing them and the girls’ family to move out of camps.

# 4: Child marriage has a devastating impact on Syrian refugee girls.

The impact of child marriage on girls is widely documented. Married Syrian refugee girls face similar consequences as other child brides, including complications during pregnancy and childbirth, violence, limited educational and economic opportunities, as well as restricted freedom and chances to socialise with children their own age.

To make matters worse, many of these marriages are short-term and unregistered, leaving girls with less protection, ironically, for themselves or their children. Divorced girls in refugee camps are stigmatised in their community, which has harmful consequences on their mental health.

# 5: The conflict is keeping girls out of school, leaving them at a higher risk of child marriage.

The Syrian conflict has left almost 2 million children and adolescents out of school, while an additional 1.3 million are at risk of dropping out. This limits their opportunities and, for girls, increases their risk of being married off. [8]

Education is a key to protecting girls from child marriage. Being in school builds  girls’ knowledge and skills so they are better able to delay marriage. Their enrolment in school among peers of the same age can support the idea that girls are still children and are not ready to be married.

# 6: Child and forced marriages are used as a weapon of war.

Alarmingly, a number of reports show that armed groups inside Syria and neighbouring Iraq use child and forced marriage, as well as sexual violence as a weapon of war to panic, intimidate and displace populations.

Sexual violence is also rife within the Syrian conflict and, as mentioned before, some families may see child marriage as a form of protection for girls at risk. In reality, we know that girls often face renewed violence within their forced marriages.

# 7: Child marriage is not addressed well enough in humanitarian contexts.

Several organisations address child marriage in Syria and neighbouring refugee communities as part of their humanitarian programmes, but a broader humanitarian response is required to achieve a more sustained progress.

Child marriage isn’t a standalone issue. It results from a distorted gender environment where conflict exacerbates the vulnerabilities in the health, education and protection areas. Therefore, the response shouldn’t be isolated. The entire humanitarian community needs to address the issue together. It’s worth remembering that child marriage happened in Syria before the conflict. Preventing child marriage in times of crisis means making sure it does not happen in times of stability.