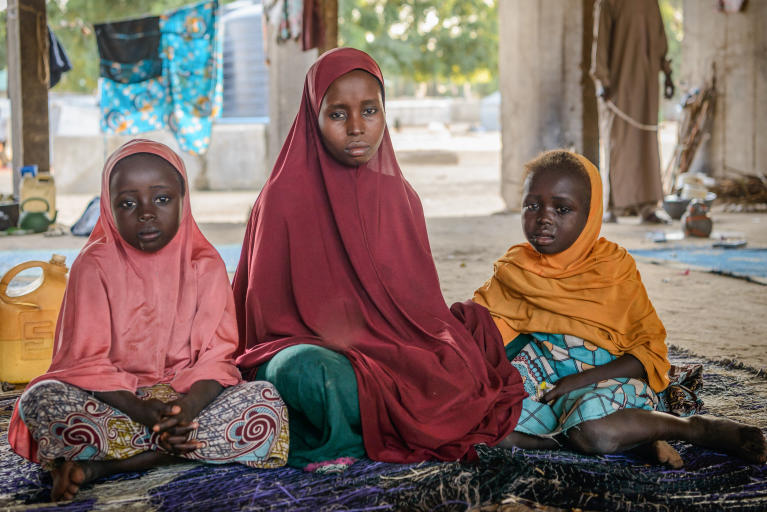 Senior adviser Richard Skretteberg Published 06. Feb 2019
Nigeria Internal displacement Neglected conflicts War and conflict
Read caption Fatima Abba (25) had to flee on foot with her two daughters of 4 and 7 years from the town of Bama, northeast of Nigeria. Bullets were raining everywhere. During the flight they survived on what they found to eat. Rations in Dalori camp in Maiduguri, fueled by the Nigerian government, are small and both Fatima and her daughters still goes hungry. Photo: Beate Simarud/NRC
The conflict in Northeast-Nigeria is in its tenth year and has displaced more than 2 million Nigerians from their homes. Hundreds of thousands have sought protection in neighbouring countries. The violence levels villages to the ground and steals the livelihood of millions of people.

A world power with challenges

Nigeria, Africa’s largest economy and most populous country with 200 million inhabitants, is the size of the US state of Texas. The country is a linguistic, cultural, ethnic and religious patchwork, which creates both diversity and challenges. There are enormous class divisions, and over half of the population is in poverty, living on less than USD 1.25 a day. At the same time, the country has rich oil deposits and a thriving business community, but corruption and weak state institutions pose major challenges.

The areas in the north and north-east are the poorest in the country. Here, social rights are weak, and there is a glaring lack of schooling and health services. The population is increasing rapidly, but life expectancy is only 53 years. Fifty per cent are Muslims, 40 per cent are Christians, while 10 per cent belong to local religions.

Conflict in the North East

The conflict between the Nigerian government and armed groups such as the Islamic State West Africa Province (ISWAP) and Jama'atu Ahlis Sunna Lidda'awati wal-Jihad (JAS), also known as Boko Haram, has displaced over two million Nigerians in their homeland. Hundreds of thousands have sought protection in neighbouring countries. The civilian population is being subjected to gross abuse in the form of mass kidnappings of children, murders and sexual assaults. And it’s the poorest areas in the north-east, especially in the state of Borno, which are the hardest hit. Ruined crops and displaced farmers have created massive food shortages. Unsafe and closed roads prevent the transport of both people and goods. In addition, yearly outbreaks of cholera kill a large number of people when the rainy season sets in.

Why did the conflict start?

In 2002, Boko Haram established itself in Maiduguri, the capital of the north-east state of Borno, by playing on the local population’s general dissatisfaction with the central government. Their main objective was to start Muslim schools and prevent families from sending their children to government-run schools. They believed Nigeria was ruled by non-believers, and they forbade Muslims from participating in any political or social activity associated with Western society. When Boko Haram started their armed rebellion in 2009, violence quickly spread to new areas. By 2014, the group controlled an area the size of Belgium. In recent years, the group has been split and they have lost control of several areas.

Where do displaced people go?

Many flee to Borno’s state capital of Maiduguri and other major cities where the authorities are present and provide some degree of security. The influx, however, leads to great pressure on already scarce resources. For most of those coming from rural areas, farming was their livelihood and they are having trouble earning a living in densely populated areas. There are hostilities around several cities, and the population is in practice without protection. Around 820,000 people are estimated to be beyond the reach of humanitarian aid organisations, and they receive no form of emergency aid.

The conflict in North East Nigeria has spread to all the countries around Lake Chad – Niger, Chad and Cameroon. These are some of the world’s poorest countries. And in addition to the conflict, the population is facing a number of challenges such as extreme poverty, climate change, chronic food shortages, the emergence of new armed groups and organised crime.

Read more about the humanitarian crisis near Lake Chad.

Cattle herders fleeing from the northern areas of Nigeria have also increased the conflict level in the so-called Middle belt where the more wooded areas to the south meet the savannah in the north. There have been violent conflicts here between the mainly Muslim nomads and the mainly Christian farmers for many years. However, it is a battle for resources, not religion, which is the core of the conflict.

President Muhammadu Buhari was re-elected in February 2019 for four new years. He is considered a conservative Muslim and won the election in 2015 with promises of fighting corruption and violence.