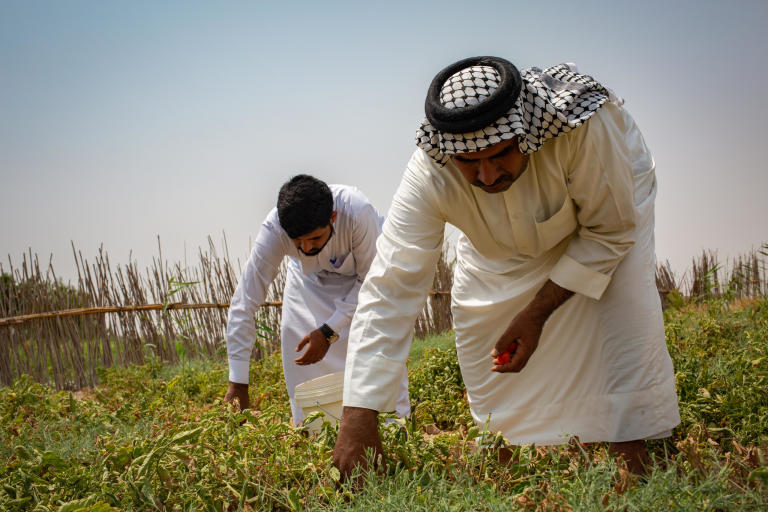 Helen Baker Published 25. Jul 2019
Iraq Climate change Environment Livelihoods and food security Training
Read caption The Norwegian Refugee Council (NRC) is providing agricultural training in Basra for young farmers, to help them deal with the ongoing water crisis. Ali (pictured left) says: “We learned about ploughing, use of greenhouses, and fertiliser use. We have already started using the techniques to protect our farms.” Photo: Tom Peyre-Costa/NRC
A water crisis in southern Iraq has damaged the farming industry and threatened rural livelihoods. Now, a new generation of farmers is fighting back, learning cultivation techniques to combat the region’s new environmental challenges.

A large portion of the population in Basra governorate in southern Iraq depends on agriculture as their main source of income. Yet, this source of income has been severely affected by a recent water crisis in the region.

The water quality in Basra and some of Iraq’s other southern governorates has deteriorated over the years. Last year, the situation took a turn for the worse. Water that flowed from upstream rivers to the Shatt Al-Arab, one of Basra’s main water sources, decreased – resulting in rising levels of sewage, salinity, and agricultural and industrial pollution. The water became unfit for human consumption, livestock or crop production.

In a 2019 report, Human Rights Watch revealed that an algal bloom in the Shatt Al-Arab – formed as a result of the high levels of pollution – may have helped to spark last year’s health crisis.

Water salinity in many areas around Basra is a problem. We also suffered from water scarcity last summer, and later, unexpected floods.
Mazin, 33, a farmer from Basra

In recent years, Basra’s water crisis and environment challenges have started to affect people’s livelihoods. In many rural areas, persistent drought has threatened agricultural production, contributing to the displacement of nearly 4,000 people in August 2018. The crisis has threatened the livelihoods of rural communities, turning many farmers from producers into consumers.

“Water salinity in many areas around Basra is a problem. We also suffered from water scarcity last summer, and later, at the beginning of this year, we suffered from unexpected floods,” explains Mazin, a 33-year-old farmer from the Zubair district of Basra.

There are many other factors that can affect food production. For example, farmers do not have access to good quality pesticides because local companies do not stock them. Farmers also face difficulties in marketing and exporting their crops.

When there is a shortage in production, people bring imported crops to the market. These are usually cheaper in price, and thus more in demand. “The less production we have, the more imported products will come to the market, and the less income we will have,” Mazin explains.

Training the next generation of farmers

According to the United Nations Environment Programme, Iraq is losing about 250 sq km of arable land every year because of climate change. This loss is expected to trigger new displacements in the region. According to Iraqi officials, up to four million Iraqis could be displaced over the next eight years.

To address this issue, the Norwegian Refugee Council (NRC) is providing agricultural training in Basra for young farmers between the ages of 16 and 22. The training focuses on modern agricultural production techniques such as agronomic practices, vertical gardening, greenhouse production, agro-processing, post-harvest handling and other methods based on local needs.

“Before the training we used cultivate the crops randomly without any scientific techniques, but after the training we learned how to use the land for planting, how to sow, and how to fertilise. Now we have better information about cultivation techniques,” Mazin says.

The programme is designed to help promote economic resilience within households and increase people’s capacity to secure their livelihoods in the medium and long term. It is supported by the German Corporation for International Cooperation (GIZ).

All ages have something to learn

Mazin was not officially part of the training programme because he fell outside the age range. However, when he noticed that the young participants were learning such useful techniques he decided to attend as a listener without registering. He is planning to use what he learnt in the coming season and expects better outcomes.

Mazin thinks the training is important for the young people in his area. They are very engaged with the programme, learning modern techniques and exchanging information about what they have learnt. Some have already started their own small agricultural projects.

We learned about ploughing, use of greenhouses, and fertiliser use. We have already started using the techniques to protect our farms.
Ali, 25, a farmer from Basra

Ali, a 25-year-old farmer from the Zubair district of Basra, explains: “I attended this training because there is a lack of agricultural information and a lack of experience in the area we live in. We need more expertise to be able to farm in spite of the water scarcity.”

Ali studied until secondary school. He started working on the family farm when he was a teenager, so never had the chance to finish his studies. The training was very beneficial for him and he gained lots of new knowledge. He says: “We learned about ploughing, use of greenhouses, and fertiliser use. We have already started using the techniques to protect our farms.”

The training programme aims to ensure that fewer people will be affected by environmental changes and challenges in future. Farmers are learning scientific methods, such as how to save water and what type of products to use.

Rahim is one of the trainers on the programme. He is also Tomato Development Project Officer with the Agricultural Engineers Syndicate, a governmental institution for agricultural engineers in Basra. He explains: “In the Zubair and Safwan area we have about 3,500 farms. They count on planting tomatoes in the autumn season, and their produce supplies two thirds of Iraq.”

Many farmers have had only a basic education and often cultivate without scientific knowledge. “They need instruction and guidance,” says Rahim.

In the beginning the farmers were worried about changing their habits. It was not easy for them to learn different techniques, especially the older ones who have been working on their farms for several generations. But when they discovered that the training would help them to develop their methods and increase production, many more of them started attending sessions. Some older people attended alongside the young farmers, gaining more knowledge to add to their years of experience.

In the Zubair and Safwan area we have about 3,500 farms. They count on planting tomatoes in the autumn season, and need instruction and guidance.
Rahim, a trainer with the NRC programme

The Agricultural Engineers Syndicate centre in Basra provides free information to farmers. However, Rahim believes it is always better to go out to the people. He explains: “One or two people might visit the Syndicate centre to ask for information. But in order to reach out to a group of people this kind of training is needed. Training makes access to information easier, and more people will be interested and able to attend.”

While southern Iraq’s water crisis may take years before it is sustainably addressed, efforts to help farmers cope with their new environmental realities are urgently needed.