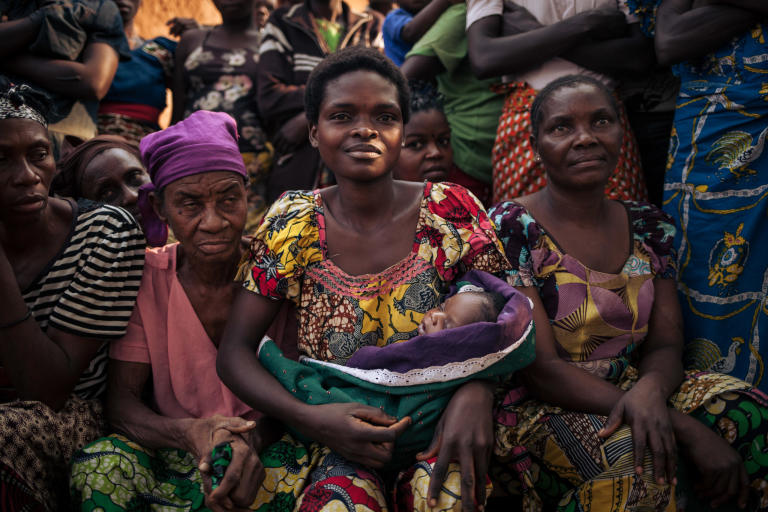 Kristine Grønhaug Published 30. Sep 2019
Gender Gender based violence
Read caption “When the war came, my husband had gone into the forest to do his work. Everyone fled on their own, leaving everything behind. During the flight one of my children was killed. I was pregnant and gave birth alone in the forest,” says Elamegi Kankologo, 26, from Mbulungu in Kasai-Central Province, DR Congo. Almost 17,000 people were forced to flee into the woods during May and April 2017. The crisis in DR Congo receives little media attention and not enough financing for humanitarian work. NRC works hard to meet these growing needs for those affected by the conflict. Photo: Aléxis Huguet/NRC
Being forced to flee is one of the worst things a person can experience. But it makes life even harder and more dangerous if you’re a woman.

What you should know about the threats facing women who have been forced to flee:

#1: Women are affected the most

Rape and sexual abuse are taboo for most people and are associated with great shame. Women often keep their experiences to themselves. Men who are the victims of rape also experience great stigma, which makes it even more difficult to know the total number of victims. But research conducted in the former Yugoslavia suggests that the number can be high.

Following the wars in Yugoslavia in the early 1990s, there was an anonymous study of 6,000 inmates in the concentration camps around Sarajevo. Eighty per cent of male inmates reported being raped or sexually abused (Christian Michelsen Institute, 2018).

UN surveys show that sexual violence committed against very young girls and boys is on the rise. This is happening in countries such as Afghanistan, Burundi, the Central African Republic, the Democratic Republic of the Congo, Myanmar, Somalia, South Sudan, Sri Lanka, Sudan (Darfur) and Yemen. The goal may be to terrorise local communities.

There are 70.8 million displaced people in the world today. Many have fled as a result of conflict-related atrocities – including sexual violence. Women can be vulnerable to rape as they navigate through checkpoints or across borders without having ID papers or legal residence.

Sexual assault can occur even in places where people have sought protection. They can be victims of sexual assault in camps for refugees or internally displaced people. For example, women can be at great risk of rape when they venture outside their camp to find firewood.

Displaced people can become the victims of human trafficking, rape and forced prostitution. To reduce the risk of exploitation, or to gain access to highly needed resources, desperate parents sometimes marry off their underage daughters to strangers. Another problem is gender-based violence, such as intimate partner violence.

#6: Humiliation and the enemy’s children

Sexual violence is used as a war tactic and as a form of terrorism. The goal is often control and humiliation. Or it can be used to make women pregnant in order to change the ethnic composition of the population.

Women who have been forced to flee can be abandoned by their husbands. In addition, they have often lost the network they had at home, such as their family, friends and neighbours. This makes them more vulnerable to abuse.

#8: Alone with responsibility for the family

Many women are forced to be the sole provider for their children. Some resort to prostitution in order to feed them.

The use of sexual violence in war is an under-reported problem and is rarely prosecuted. But international law states that rape can constitute a war crime, a crime against humanity and a component of genocide.

Sexual violence in war and conflict has been used and tacitly accepted in both historical and modern times.

In the year 2000, the UN adopted resolution 1325 on women, peace and security. It is important because it states that sexual violence in war is a part of warfare and not just something that happens randomly. This is precisely why the resolution argues that women should be allowed to participate in conflict prevention, peace processes and conflict prevention operations. Women’s situations and assessments have now become part of UN reports.

When last year’s Nobel Peace Prize was awarded to Congolese doctor Denis Mukwege and Nadia Murad from the Yezidi minority group in Iraq, it helped to shed light on rape in war and conflict – a problem that is largely hidden.

Read also: 5 things you should know about the Yezidis

* Conflicts, wars and crises can have different impacts on women, men, girls and boys. Some people may be denied rights just because of their gender, others may be subject to abuse and sexual violence. NRC has committed to consider gender issues in all our humanitarian aid work.

* Whether it’s standing up for women’s right to own land, building girls’ toilets at schools or protecting boys from being recruited as child soldiers, NRC takes into account people’s needs with regard to gender and age.

* NRC’s global provider of expertise, NORCAP, employs highly qualified experts, including in the areas of protection, gender and gender equality.

* People who have been forced to flee their homes are in an extremely difficult life situation. NRC works to ensure that people can maintain their dignity and self-confidence.