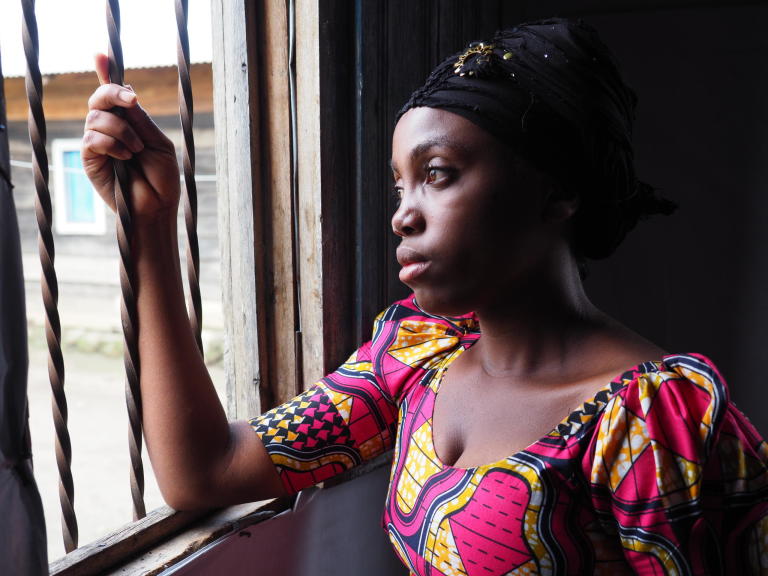 Tria Garcia Published 13. Nov 2019
DR Congo Unaccompanied minors Youth
Read caption Rachel is 20 years old and has been attending the NRC tailoring class in Kitchanga. After training, her dream is to start her own tailoring shop and to be able to give her daughter an education. Photo: Ingrid Prestetun/NRC
Almost 600 million people between the ages of 10 and 24 are affected by conflict around the world. Earlier this year, we met six young people who had been forced to flee their homes in the Democratic Republic of the Congo. Here, they tell their stories of chaos, separation and hope.

Being a displaced youth is extremely difficult. In the chaos of fleeing, young people can be separated from parents and relatives, leaving them responsible for younger siblings and other family members.

From being young and carefree, they unexpectedly find themselves in charge of everything. Their once bright future is now muddled with uncertainty, and each day is a struggle to survive. The sudden changes leave them confused, sad and scared, but they have no choice except to carry on with the new responsibilities on their shoulders.

Imagine waking up in the middle of the night to the sound of screams, violence and gunshots. There’s no time to waste. You have to run from the chaos, as fast and as far as you can. This is the reality for many displaced people. Sudden violence doesn’t leave you time to prepare.

No time to find his family

When groups attacked Martin’s village, everyone in the village ran in different directions. Martin and his father ran in the same direction, but his mother ran in the opposite direction. Martin didn’t have time to bring anything with him.

After four hours of walking, Martin and his father made it the Mwaka camp. The next day, his father decided to return to their home to see if he could find any of their belongings and secure their animals. Martin’s father never came back.

His mother and five siblings are still alive, but they fled to another town far away. Martin can’t go there because of the distance and the danger. He struggles with the loss of his father and friends and misses his mother and siblings.

He has been all by himself in the Mwaka camp, in the east of DR Congo, for over a year now. His survival depends on finding firewood to sell for food, and if he’s lucky he gets to eat one meal a day. Some days he doesn’t eat anything.

Fleeing for four days on foot

One year ago, Awezaye woke up during the night to the voice of her mother crying and screaming “I’m dying”. Her village was being attacked amid violent clashes between ethnic groups.

Awezaye reacted quickly. She grabbed her little brother and sister and escaped into the bush. They walked for four days. Awezaye’s parents and youngest sister, who was just 18 months old, fled in another direction. Her youngest sister died. Her parents ended up in another area far away.

When Awezaye first arrived in the Mulgani camp, her living conditions were very difficult. She had no access to food and no shelter. She also had the responsibility of taking care of her two younger siblings. NRC was able to support her with shelter and cash-for-food.

Aweyaze really misses her parents, but it helps to know that at least they’re still alive. Her dream is to be reunited with her parents and go back to school to learn tailoring so she can find a job.

Staying strong for his brother

Masimango, 18, and Bone, 8, are brothers in the Tanganyika camp. When their village was attacked two years ago, their parents and older siblings were killed. The two brothers are all that each other has left.

Being a displaced youth without parents is extremely difficult. At only 18, it’s hard for him to be the only one responsible for his younger brother. He feels immense pressure to be strong for Bone, despite the challenges they face every day. He misses his family and his old life.

He dreams that he and Bone will be able to go back to school, and that one day he might become an aid worker so he can assist others affected by conflict. He tries to stay optimistic and says that as long as he gets food, he can stay strong enough to eventually find a job. It’s all about just surviving each day.

Despite the daily challenges they face, displaced young people dream of a better future. With the help of the Norwegian Refugee Council (NRC), some dreams are becoming a reality.

Dreaming of a brighter future

Rachel lives with her parents, siblings and two-year-old daughter in Kitchanga town. However, she doesn’t feel safe as a displaced youth and is constantly afraid. She also feels ostracised for being a single mother.

She is attending NRC’s tailoring course in Kitchanga, which runs for six months. Before attending the classes, she had nothing to do in the camp. She is now glad to make use of her time to develop new and useful skills. She loves sewing and dreams of opening her own tailoring shop so she can earn money to send her daughter to school.

Hope despite a lack of opportunities

Albert, 22, also lives in the Kitchanga town with his wife, two children and parents. Because Albert’s parents are quite old, he has to take care of them as well as his own wife and children. He tells us the difficulties of being a displaced youth. There’s a lack of job opportunities, and every day is a battle to survive.

Albert is attending an NRC course to train to be a mechanic. He dreams of working in a car repair shop so that he can get enough money to continue his education at university. He would also love to support his wife to start her own business and hopes that one day they can return to their home village together.

Understanding the struggle to survive

Justin Aganze works for NRC. He was attracted to NRC’s cause because of his own experience as a displaced youth. He understands the plight of those forced to flee and their struggle to survive in the worst conditions.

“Death would have been better because we were suffering so much. It was worse than hell,” says Justin, as he recalls the time he and his family fled their home town and walked for days, taking shelter in forests and churches with very little to eat.

Like the aid organisations that helped his family during that difficult time, he also wishes to become a beacon of hope to those experiencing similar hardships. He has taken his work beyond his job with NRC and works as a youth mentor during his spare time.

Many schools in DR Congo have been burnt down during the ongoing violence or are still being used as shelters for displaced people. Many thousands of children and young people displaced to rural villages and camps are not able to go to school, giving them few prospects in either the immediate or the longer-term future. Without any adults in their lives, displaced young people rely greatly on support from NGOs such as NRC.

NRC supports them by providing customised education and training programmes. Through these programmes, the youth have opportunities to be active and engaged members of their communities.

Our education teams in DR Congo:

Read more about our work in DR Congo