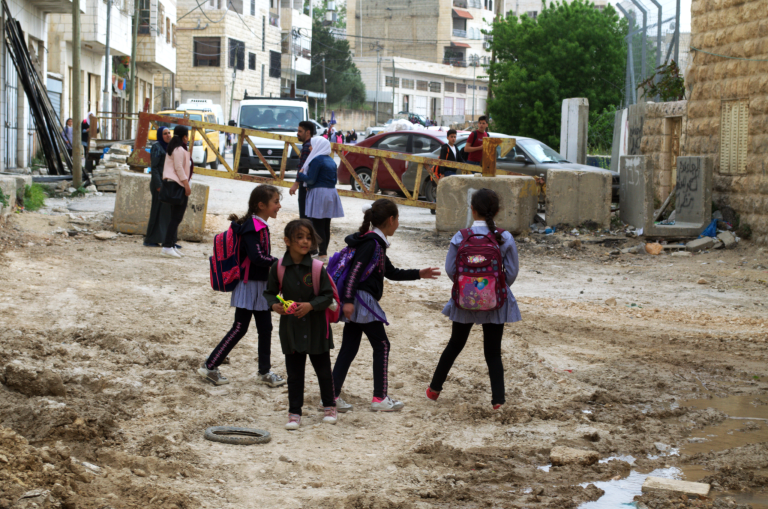 
The children who cross the checkpoints

Ivan Karakashian Published 13. Sep 2019
Palestine Children Education Security
Read caption Children heading home from school pass the yellow steel gate at Qafisheh checkpoint in Hebron's Tel Rumeida neighbourhood on 2 May 2019. Photo: Ivan Karakashian/NRC
In the middle of the night, the soldiers came knocking. That was three years ago, but Muna, now 11, vividly remembers the loud banging on her front door.

Around a dozen heavily-armed Israeli soldiers, some masked, had come to search her family’s home in Hebron’s Tel Rumeida neighbourhood. Muna’s father, Nael, told the commanding officer that the women would need to dress and put on hijab (head covering) before he could let them in. But the soldiers refused to wait.

They ransacked the living room, stepping on the furniture with their muddy military boots, and demanded to enter the bedrooms. It was cold and raining, but the soldiers demanded that everyone leave the house.

“I opened the door to my children’s bedroom and I said: ‘Look, they are all sleeping, you want me to wake them up and take them outside the house? I won’t do that’,” Nael recalls saying to the soldier. “‘You have two choices: either carry out the search while we are here, or shoot us.’”

Wary of provoking the soldiers, who seemed on edge with their fingers on the trigger, Nael was careful to keep his hands visible at all times. Muna and her siblings, however, were screaming and crying.

“I told my children to come to me,” said Nael, remembering the shock he saw on their faces. “I tried to comfort them a little, so that the soldiers would also calm down.”

The search lasted 15 to 20 minutes. Closet doors were flung open, drawers pulled out of cabinets, and mattresses overturned. The soldiers also snapped pictures of the family’s identity cards.

While soldiers had previously disturbed the family at night, it was the first time that Muna and her three siblings had experienced so many armed soldiers aggressively raiding their home.

Muna’s family live in the “H2” area of Hebron – a part of the city controlled by the Israeli authorities. Here, 800 Israeli settlers live among an estimated 33,000 Palestinians.

Tensions in Hebron and the rest of the occupied West Bank escalated into lethal attacks in late 2015. Since then, the UN Office for the Coordination of Humanitarian Affairs (OCHA) reports that Israeli forces have killed 31 Palestinians in the H2 area and injured 1,425 more. Palestinians have injured 11 soldiers during the same period.

The increased violence in 2015 led to the imposition of severe restrictive measures in H2. Israel declared a “closed military zone” over four of the five settlement compounds, limiting Palestinian entry to registered residents only, and tightened access in the surrounding neighbourhoods.

Since October 2015, 75 per cent of homes in the closed and restricted parts of H2 have been searched by Israeli forces, according to a 2018 household survey by OCHA.

And it is not just the frequent night-time incursions that deeply affect children like Muna. There are also the checkpoints. According to OCHA, six of the checkpoints in the restricted areas have recently been upgraded, with towers, turnstiles, revolving doors, and metal detectors.

Within ten metres of the entrance to Muna’s apartment building lies one of these checkpoints, known as Qafisheh, on the western side of H2. A yellow steel gate, sometimes manned, prevents entry to vehicles. During times of increased violence, or Jewish holidays that bring a larger settler presence, soldiers posted at the gate search all passers-by.

Until July this year, when the gate was moved back to align with the checkpoint, Muna had to cross it whenever leaving or returning home.

“They don’t want us to come and go freely,” says Muna. “They stop us sometimes just to harass us, especially during their holidays.”

Muna, who graduated from the sixth grade this summer, says she sometimes feels afraid at checkpoints, but has mostly become used to crossing them and sees it as “normal”. Her 14-year-old brother Obada, however, experiences them differently.

Five years ago, when Obada was just nine, Israeli soldiers closed the Qafisheh checkpoint in the middle of a hot summer day, preventing him and his father, Nael, from reaching their home.

The soldier was being aggressive, shouting, and when he shoved me, his weapon struck my son in the face and made him bleed.
Nael, father of Muna and Obada

“I started to talk to the soldier while my son stood in front of me,” Nael recalls. “The soldier was being aggressive, shouting, and when he shoved me, his weapon struck my son in the face and made him bleed. When I saw my son was hurt, without much thought, I pushed the soldier back and he fell to the ground.”

Nael quickly handed over his son to a Palestinian man standing nearby, fearful he was about to receive a beating. The other soldiers seemed ready to attack when the commanding officer recognised Nael and his son as residents of the nearby building. The officer apologised and allowed them to continue on their way.

Nael says the incident had a traumatic effect on Obada.

Obada and his younger brother, Yamen, have to cross two checkpoints to reach their schools. Like all schoolchildren in Hebron, they travel in groups for safety.

According to OCHA’s household survey, 88 percent of children living in the restricted areas of H2 have to cross a checkpoint to reach school. In this relatively small area, there are no less than 121 physical barriers to movement, including roadblocks, gates, and checkpoints.

Soldiers often subject children to bag and body searches, unnecessary delays, and sometimes detention. Adolescent boys like Obada are particularly likely to be targeted by Israeli forces for stops and searches, according to UNICEF.

I had to put protective metal mesh on the windows because of the stones they throw at us.
Nael, a Palestinian living in Hebron

“They go up on the roof,” says Nael. “They say things I'm embarrassed to repeat. I had to put protective metal mesh on the windows because of the stones they throw at us. Imagine a settler standing on the roof peeing in full view of my children.”

BLP training teaches a range of behavioural techniques to help children cope with trauma and self-regulate their emotional responses. The techniques include breathing exercises, relaxation techniques, and drawing.

“Fear in our circumstances is normal, but I want to try as much as possible to prevent it from becoming a dominant part of my children’s lives,” said Nael. “With the school’s help, Muna overcame the fear inside her, but for Obada, it remains a struggle.”

Settler violence against Palestinian families and children is not limited to Hebron. Yitzhar settlement, home to violent religious-nationalist extremists, sits on top of a mountain overlooking six Palestinian villages in the Nablus governorate. Between 2008 and 2018, Israeli rights group Yesh Din documented 275 offences allegedly carried out by settlers in the area against Palestinians and a further 60 by Israeli forces.

Tasneem, 11, lives with her parents and nine siblings in an isolated area of Madama, one of the six villages. During a period of heightened violence in October 2015, Israeli forces shot Tasneem’s sister, Istabraq, then 15, multiple times in the arm when she allegedly attempted to carry out a stabbing attack in Yitzhar. She survived the injuries and spent 20 months in prison.

Soldiers raided Tasneem’s home the same day in retaliation. In the days and months that followed, settlers threatened the family with violence.

“They once came dressed in white and threatened to burn us down,” recalls Tasneem. “They told my father they would kill us while we slept at night.”

These experiences left Tasneem distressed. If she came across settlers or soldiers on her way to school, she would experience a pounding headache and heart palpitations.

“She often told me that she could not sleep at night because she feared settlers or soldiers could come at any time,” says Kawkab Shelbaya, Tasneem’s guidance counsellor at Madama Mixed Secondary School. “At school, she always seemed afraid and uneasy.”

About two years ago, Tasneem participated in NRC’s Better Learning Programme, and appears to be doing much better. As part of the exercises, children are taught to think about a safe space whenever they feel distress. For Tasneem, her safe space, which she has named “peace land”, is tucked away among a group of trees, down the mountain from her home.

“It is where I feel at peace in my heart,” says Tasneem. “I always love relaxing there.”