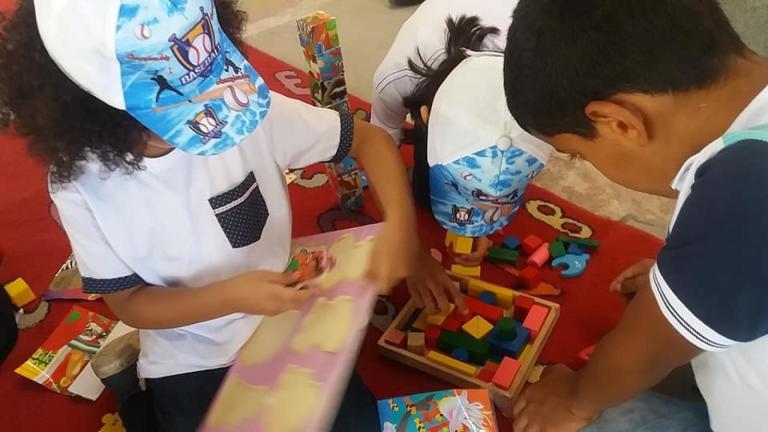 
Sami has found his happy place

Liqaa Haraga Published 18. Oct 2019
Libya Children Education Internal displacement
Read caption Sami and his friends play with shapes and colours at the NRC summer school in Tripoli. Photo: NRC
“When Sami* first arrived, he did not want to leave his father’s side,” recalls Ms Subheya, a teacher on the Norwegian Refugee Council’s (NRC) summer school programme. The eight-year-old boy had been left severely traumatised by the gun-fights he’d witnessed when fleeing his home in Tripoli.

Sami is one of a family of five from Al-Khalla, a suburb of southern Tripoli. When fighting broke out in the city, his neighbourhood was one of the first areas affected by the indiscriminate shelling and destruction.

An estimated 823,000 people, including around 241,000 children, are in need of humanitarian assistance in Libya as a result of persistent political instability, conflict and insecurity.

Tripoli and Benghazi are the two areas with the highest concentration of people in need. Since the onset of the renewed armed conflict on 4 April 2019, between the eastern-based Libyan National Army (LNA) and the western-based internationally recognised Government of National Accord (GNA), clashes and airstrikes have been reported continuously in densely populated areas of southern Tripoli.

This has triggered the displacement of families like Sami’s to safer neighbourhoods in the city and along the coastline in western Libya. Families displaced to locations close to areas of conflict remain at risk, along with the existing residents who are providing them with shelter.

A constant state of fear and stress

Sami and his family were forced to abandon their home. As they fled, Sami witnessed gunmen raiding and looting houses, and others shooting at military vehicles. These traumatic incidents left him in a constant state of fear and stress.

When they finally managed to reach safety, Sami and his family went to stay with their relatives in Zawiyat Al-Dehmani, on the other side of the city. This area was close to one of the schools supported by NRC’s education programme in Tripoli. Here, our education teams have been delivering training to teachers to help them support children affected by trauma, through NRC’s flagship Better Learning Programme (BLP).

What is the Better Learning Programme?

BLP supports conditions for children to better succeed in school. It aims to:

Luckily for Sami, Ms Subheya, one of the teachers who worked at the school and had received NRC training, knew Sami’s family. She quickly realised that NRC’s programmes had been designed to help children like Sami, and recommended the summer school programme to his parents.

Learning to leave his father’s side

“When Sami first enrolled in the summer school, he did not want to leave his father’s side,” Ms Subheya recalls. “However, bit by bit and step by step, we helped Sami and his family to get over this fear.”

In order not to make Sami feel different from the other students, I did the ‘happy place’ exercise with the whole class
Ms Subheya, a teacher at the NRC summer school

She continues: “I started approaching Sami during classes the way we were trained in BLP, and over a short period of time I noticed a tremendous change in his behaviour and interaction with other children. He didn’t need to stay with his father during class anymore.

“In order not to make Sami feel different from the other students, I also did the ‘happy place’ exercise with the whole class. The exercise gave him comfort and helped him stand on his own and engage in group activities without reaching for his father all the time.”

Sami, his sister, and many other displaced families have suffered as a result of the conflict in Libya. But with NRC’s support, these children have a better chance to learn in a safe environment, develop resilience to crises, and get access to quality education.

NRC began operations in Libya in 2017 and has maintained offices in both Tripoli and Benghazi since October 2018. We are one of the main aid organisations in the country in the areas of education, shelter and legal assistance.

We are the leading education INGO in Libya and have helped 2,400 vulnerable children across the country to access a safe education environment. We have also successfully implemented shelter projects, including the renovation of 300 houses, 17 schools and the communal infrastructure in seven informal settlements during 2019.

We have started the first legal assistance programme in Libya, working in partnership with local authorities and existing legal aid structures. Our information, counselling and legal assistance (ICLA) team has identified 3,500 individuals for support. Areas of focus include investigating the legal barriers and pathways to education for out-of-school children, and helping vulnerable communities to access information, legal assistance and other specialised services including non-legal support.

We continue to scale up our activities to support displaced Libyans, returnees and host communities as well as vulnerable non-Libyan communities.

* Sami’s name has been changed to protect his identity