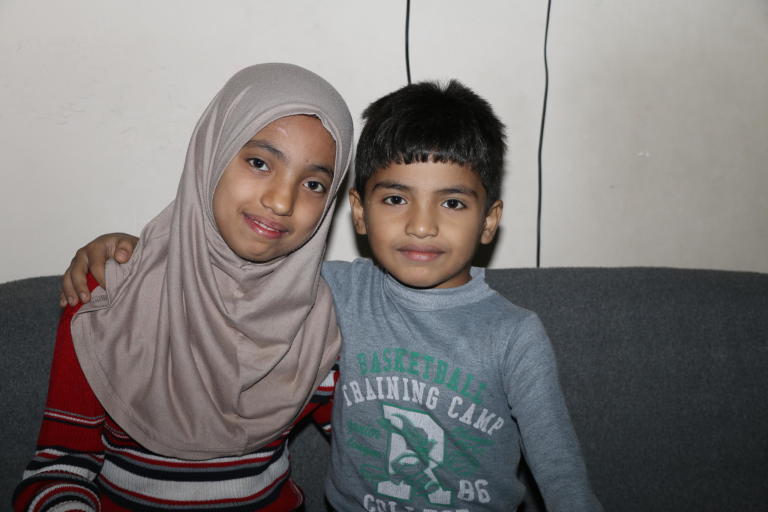 Published 20. Dec 2019
Afghanistan Lebanon Palestine Education Shelter and settlements War and conflict
Read caption Fatin, 11, and Adam, 8, from Mount Lebanon governorate, Lebanon. Photo: Zaynab Mayladan/NRC
New year is a time of reflection, and of looking forward to the year ahead. As we look ahead to 2020, we invite displaced people in Afghanistan, Palestine and Lebanon to share their wishes and dreams for the future.

I wish...for education and a cricketing career

Belal, 15, is a Pakistani refugee living in Gulan camp, in the south-east of Afghanistan. Here, thousands of refugee families are at risk of losing their basic rights, caught in the middle of a dispute between the Afghan and Pakistani governments, and abandoned by the international community.

Belal is a student who also manages a cricket team. He has become a role model for other children of his age. He wishes to go back to his country and become a national cricket player one day.

“I wish there was a high school and we could continue our studies, before it’s too late. I know how hard life is in this refugee camp and I know it’s hard for every one of us. Through cricket we want to overcome some of the challenges together,” says Belal.

Jumana, 47, lives in the Al Shati refugee camp near Gaza City, Palestine. Her family is one of thousands in Gaza struggling to cope with rising unemployment and declining government support.

A mother of five, Jumana struggles to make ends meet and is fighting to stave off eviction. She has recently been receiving cash-for-rent from the Norwegian Refugee Council (NRC), but worries about what the future holds.

“We are terrified of living on the street after the cash-for-rent assistance from NRC finishes. We always think about what we are going to do after the end of the project. I dream about having a room to myself one day,” says Jumana.

I wish...for peace and family reunion

Shamsedine, 44, is a Syrian refugee living in the Bekaa Valley area of eastern Lebanon. Hosting displaced people from Syria and Palestine, Lebanon has the highest number of refugees per capita in the world. This has put pressure on public services. Refugees cannot legally work and it’s difficult to move freely without fear of arrest or detention.

“My wish for this new year is for the war in Syria to end so that the children of Syria can be safe. The country needs stability so that people can return and be united again. Before the war, families were united and loved ones always saw each other. I haven’t seen my brother for five years. He lives in another part of Lebanon and our financial conditions don’t allow for it,” says Shamsedine.

I wish...for my children to have a good education

Fatima, 39, is a Syrian refugee living in Mount Lebanon governate in western Lebanon.

“The hope is gone but we have dreams. I dream that my family could be resettled so that my children can pursue their education. That’s all I hope for, that they can get a good education to have a better future,” says Fatima.

I wish...to be an orthopaedic surgeon

Fatin, 11, is a Syrian refugee who also lives in Mount Lebanon governorate, Lebanon.

“I wish that I can become an orthopaedic surgeon when I grow up, so that I can help other people in need who are in similar situation as my father,” says Fatin.

I wish...for a new life in a new country

Ali, 18, is a Syrian refugee living in the Bekaa Valley area of eastern Lebanon.

“I wish I could be resettled in a third country. There is no future for me here, and in Syria I would be forced into conscription. The only way I can get a better life is by leaving for another country. I also wish that the Arab states and international community could find a solution for the youth. We are living a very difficult life and we need their support to live in decency,” says Ali.

Read about our work in Afghanistan, Palestine and Lebanon

Help more wishes to come true for displaced people around the world. Support our work in 2020