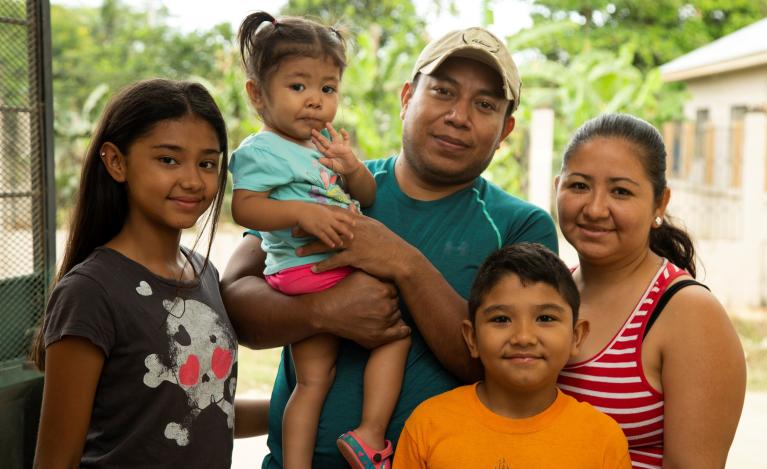 Marcela Olarte Published 24. Sep 2019
Honduras Information, counselling and legal assistance (ICLA) Protection
Read caption Manuel* with his wife Rocio* and their three children. Manuel was kidnapped by a criminal gang in his home city of San Pedro Sula, in northern Honduras, then fled across Central America to the United States in search of safety for himself and his family. Photo: Up Studio/NRC
“I fled my country and left my family behind because I was threatened. I asked for help in my own country and in the United States, but I wasn’t heard. I was deported.”

Manuel walked 3,500 km in search of safety, only to be sent back home to Honduras. Now, with help from the Norwegian Refugee Council (NRC), he is building a new life for himself and his family in a safer part of the country.

It was the day before Christmas and there was no money for dinner. Manuel*, 35, an out-of-work carpenter and father of three, went out to sell donuts in his home city of San Pedro Sula, in northern Honduras. He got up at dawn, prepared the food and said goodbye to his wife. Little did she know he was leaving the home they shared for the last time.

While he was out, Manuel was kidnapped by one of the criminal gangs that controlled his neighbourhood. He was stopped in the streets by armed men with their faces covered. “I couldn’t pay the extortion money they were demanding,” he says, “so they beat and kidnapped me. One of them yelled at me: ‘nobody makes fun of us!’”

You either pay the extortion money or they kill you
Manuel, 35, from Honduras

The threats he had received during the previous months had ended with the deprivation of his freedom. Luckily, he managed to escape. He succeeded in untying himself when the guards weren’t looking and headed for the mountains. “You either pay the extortion money or they kill you,” he explains.

Manuel had sought help from the Honduran authorities, but had not been heard. He did not want to put his family at risk, but was not able to pay the extortion demands. Manuel decided to turn away from his family. He left without telling his wife and children.

Run away or pay the price

Criminal gangs control urban areas in Honduras through extortion, threats and assassinations. In these areas, adults and their families are restricted during night hours to schedules that prohibit the use of public spaces. Residents must comply with the rules and codes; for example, truck drivers who enter an area controlled by a criminal gang are strictly monitored and extorted.

Honduras has one of the highest homicide rates in the world. Those who do not comply with extortion demands have two options: run away or stay and pay the price.

Death threats and extortion mixed with poverty lead to displacement. In the areas most affected by violence, people like Manuel are often forced to move within and beyond their country’s borders in search of safety.

A journey without a destination

Manuel managed to flee. He had only one certainty: he could not return to his family.

Alone, without food, money or a concrete destination, he set off on foot to seek protection in another country – a journey that would take him more than ten months.

Manuel first arrived in Guatemala, hoping to start over and find a job. His priority was to save money and find a way to get his family away from the neighbourhood where they were living. He recalls: “I worked a week for 100 quetzales [USD 13] but it went bad, and they scammed me.” Hope in Guatemala quickly vanished.

For almost eight weeks, Manuel slept in the insecure and cold streets of Guatemala. He eventually decided to head north through Mexico, working where he could, and continuing his journey. On the road, he received help from church organisations. Without major setbacks, he reached the border with the United States.

I knew that I had to get out of where I was and save my children
Rocio, Manuel's wife

His family was forced to flee

A month after his kidnapping, Manuel manage to contact his wife, Rocio*. “When we found out that he was alive, I knew that I had to get out of where I was and save my children. He was no longer with us and the extortions didn’t stop,” she explains.

Thus, Manuel’s family made the difficult decision to flee the house that had been their home until then. They had to move.

Rocio packed what she could and left with her three small children aged 11, 7 and 1. They fled to a remote place in a rural area, far away from home. For the next six months, they lived on the generosity of acquaintances who welcomed them. Rocio managed to keep her children safe. She found a school for them nearby, and they walked 40 minutes each day to study.

Despite the seriousness of the situation, families in Honduras do not usually resort to official protection mechanisms, due to the widespread distrust of public institutions. Displaced people in Honduras tell us that going to the authorities can even put them at risk of retaliation from criminal gangs. For this reason, many people prefer to seek the support of relatives or acquaintances. Here, displacement leaves an invisible mark.

Rocio hid behind uncertainty. She and her family heard nothing from Manuel. Seven months after their last communication, she was losing hope of ever seeing him again.

If I have to die with my family, I will
Manuel

Manuel arrived exhausted in the United States, where he was promptly arrested. He asked for international protection, but months went by without an answer. The despair was unbearable and Manuel, a man who always wanted to protect his family, told the judge: “If I have to die with my family, I will.” Days later, Manuel was deported.

After walking 3,500 km across three countries for 240 days in search of protection, Manuel had only succeeded in obtaining a non-stop return ticket. He arrived back in Honduras in November 2018.

Disorientated, like many deportees, Manuel did not know what to do or how to find his family. He just wanted to avoid returning to his old house.

Then, his fortunes began to change. Manuel met an NRC staff member at the migration point where the organisation has a continuous presence to identify deportees in need of protection. He received assistance in accordance with his situation. “The first help was words,” he explains. “I arrived aimlessly. They supported me with a ticket to go find my family and from there they accompanied me.”

The idea of ​​not knowing where his family was tormented him. But he managed to call an old neighbour who helped him to figure out where he could meet them.

“I arrived at night and they were shocked. My youngest daughter didn’t recognise me. But my wife started hugging me, crying and giving thanks that I was alive, because they had thought I was already dead.”

Home, work and peace of mind

Thanks to funding from the European Union and the support of NRC, Manuel and his family managed to find a safer place to live. They received financial help to rent a house and buy food. They also received legal support to access their rights in Honduras and rebuild their lives.

Manuel’s children are now studying again. This time, the school is just a few streets away from home.

“I came to take my family out of the country, but with the help I received I have the peace of mind of knowing that I am not alone,” says Manuel.

With some of the money he received, Manuel has repaired his equipment to resume his job as a carpenter. The wood has reshaped his life just as he reshapes the wood, and his work now gives much-needed stability to his family.

*Names have been changed for protection reasons.