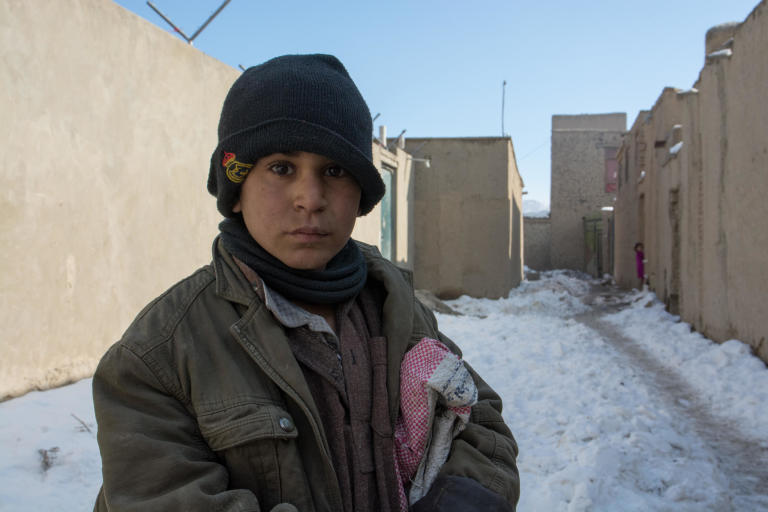 
If you're a 13-year-old living in Afghanistan

Roald Høvring Published 30. Jan 2019
Afghanistan Children
Read caption COLLECTING SCRAP. Akhtar Mohammad, 13, fled the conflict some two and half years ago from Kunduz province. Photo: Enayatullah Azad/NRC
If you're a 13-year-old living in Afghanistan you'll have lived your whole life in conflict and war. Most likely you face the threat of being displaced or you already live in displacement. This is the life of 13-year-old Akhtar Mohammad.

We meet him an early morning after a freezing night with heavy snow fall. A white soft carpet of snow is covering the makeshift tents in this informal settlement outside the west part of the capital Kabul. The settlement consists of around 50 families. Many of the families in the settlement have been living as refugees for many years in Pakistan, before they returned.

Akhtar and his family fled the conflict some two and half years ago from Kunduz province. He has five siblings. The thirteen-year-old works together with his father on the streets of Kabul collecting scraps.

Children continue to be disproportionately affected by the crisis

Children below 18, which counts for more than half the Afghan population, continue to be disproportionately affected by the crisis

Persistent violence, discrimination, and denial of access to essential services – particularly healthcare and education – have all undermined their right to a safe and secure early environment, compromising their physical and psychological well-being.

At the same time, a severe drought has left up to 3.9 million people in rural parts of the country in need of emergency food and livelihoods assistance and sparked a significant displacement crisis in the western region.

If you are 13-years-old living in Afghanistan, you are at risk of being exposed to many dangers:

More than half of them are under 18 years (47.3 per cent of Afghanistan’s 35.7 million people are younger than 15 years). They are exposed to escalating violence, forced displacement, the loss of essential livelihoods and limited access to basic services.

# 2: Every minute one person is being displaced by conflict in Afghanistan.

UN OCHA estimates that some 500,000 Afghans may be newly displaced by conflict in 2019. More than half of them will be children under 18.

In addition, as many as 300,000 people could be uprooted by the drought, including a proportion of those already displaced in 2018.

# 3: More than one million displaced live in informal settlements.

More than 1.2 million internally displaced people across Afghanistan are living in informal settlements. More than half of them are children.

As many as two-thirds of all people displaced outside their province are moving towards the five regional capitals of Kabul, Nangarhar, Kandahar, Balkh and Herat.

# 4: Six out of ten people requiring humanitarian and protection assistance are children.

6.3 million people require some form of humanitarian and protection assistance. 60 per cent of them are children. This includes 3.7 million in severe and major need.

Out of the reported 3.7 million out-of-school-children in Afghanistan. 60 per cent are girls, and in some provinces as many as 85 per cent of girls are out-of-school.

The worsened security situation and the worst drought in a lifetime has led to large scale of food insecurity. In 2019, OCHA estimates that a total of 4.5 million people are in need of urgent food and livelihoods assistance.

# 7: Three out of ten lack access to basic health services

Overall, 30 per cent of Afghans lack access to basic health services. Of those, people living in hard-to-reach districts are most likely to be deprived of essential primary health services

Despite an overall decrease in the number of children killed and injured in the first nine months of 2018, casualties remain extremely high with 2,136 recorded. Of specific concern is the rise in deaths and injuries resulting from aerial strikes and suicide attacks, which now account for 49 per cent and 10 per cent.

In addition to the physical costs imposed on children, the mental toll on those who have experienced stressful situations – now multi-dimensional in nature – has been considerable. Children who have witnessed extreme violence, including the killing or maiming of family members, frequently report disturbed memories and sleep, muteness, difficulty concentrating and aggressive behaviour as a result.  Only 2 out of 10 have access to services giving psychological support.

# 10: More than half the population live below the poverty line

Approximately 54 per cent of the Afghan people now live below the poverty line (an increase of 16 per cent in the last five years).  At the same time a projected 480,000-600,000 young people are expected to enter the labour market each year until 2025. This is many more than the economy can absorb. Around 500,000 young males are already unemployed and 71 per cent of young people cite unemployment as the biggest problem they face.