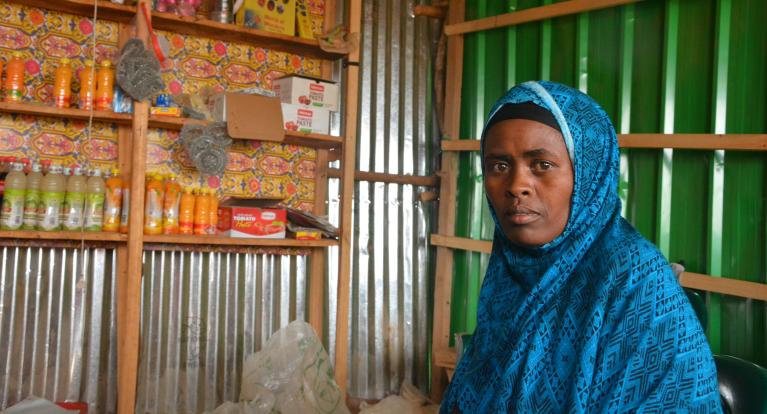 
How women entrepreneurs are building resilience

Abdifatah Abdi Muse Published 01. Jul 2019
Somalia Livelihoods and food security Resilience Training
Read caption Fadumo Sharif, 29, a mother and business owner from Dollow, south-western Somalia. Fadumo built a kiosk and started a small shop with support from the Norwegian Refugee Council (NRC), and is now able to afford food, water and school fees for her family.
Conflict and disaster have shaped the lives of the Somali people for the last 30 years. Now, a new initiative is helping women to develop their own businesses – making them and their families more resilient to any future upheaval.

The security situation in Somalia is still unstable after years of conflict between government forces and various non-state armed groups. To make matters worse, in 2017 the country was hit by its worst drought in 20 years – a disaster from which it is still recovering.

As a result, millions of people have been displaced in southern and central areas of Somalia. In total, 2.6 million Somalis are currently displaced within the country, according to the UN-led Protection and Return Monitoring Network. Often, their livelihoods have been destroyed and they find themselves dependent on humanitarian assistance for survival.

Hawo Buyo, 38, is a mother of ten children and lives in the Baidoa camp for displaced people in southern Somalia. She and her family have been forced to flee twice. “We moved to this settlement in Baidoa because we were displaced by conflict in Mogadishu and severe droughts later in Dhuxuley,” she explains.

Part of this programme is an “income generation” initiative, whereby women in the Baidoa and Dollow districts receive business management training and funding to help them diversify their businesses. Markets have been constructed in both districts to provide an outlet for this new business activity.

The women involved are all heads of their families, and each runs a small business which serves as their main source of income. The training and support they receive increase their earning potential and make them less vulnerable to adverse events such as droughts.

Fadumo Sharif, 29, lives in the Qansaxley settlement for displaced people in Dollow, near the border with Ethiopia.

“Our livelihood previously depended on collecting and selling firewood. It was a very difficult job and I could not provide three meals a day for my family,” she explains. However, all this changed when she was selected to take part in the income generation project.

“We were trained in business management and received grants of USD 500 to invest in our businesses,” Fadumo continues. “I decided to invest in a new business that would be more profitable than wood collection. I built a kiosk and started a small shop. Things have changed for the better. My children are able to go to school. The food shortage problem is solved and we are able to pay the water bills.”

The income generation project is designed to educate and empower entrepreneurial women. Charles Obayi, Resilience Programme Manager with NRC in Somalia, explains the thinking behind it.

“Through our interaction and feedback, we have learnt that targeting women contributes to gender protection within families in these communities,” he explains. “In addition, mothers tend to direct their income towards improving the lives of their children.”

Jawahir Adan, 38, is one of the beneficiaries of the income generation project. A mother of six children, she used to have a small table-shop that barely provided sustenance for her family. She could not pay her children’s school fees.

Through the project, Jawahir has worked to expand her business. Now, she owns a retail and wholesale shop. Her family’s lives have improved, and her children are now able to go to school.

Jawahir believes that engaging with woman was a very good decision. “In Qansaxley settlement, most of our customers are women, she explains. “A woman knows best what a woman needs. Therefore, encouraging business women in the local market is very beneficial.”

About the project and the BRCiS programme

A total of 128 women have received training and support as part of the income generation project, which is funded by the EU Directorate-General for International Cooperation and Development (DEVCO).

The project is part of the Building Resilient Communities in Somalia (BRCiS) programme, a humanitarian consortium that takes a holistic approach to helping Somali communities deal with shocks and stresses. Other BRCiS initiatives include building water structures for agro-pastoral communities, beekeeping, and various other livelihood support activities. BRCiS works in line with NRC’s global strategy to promote durable solutions in areas affected by displacement in Somalia.