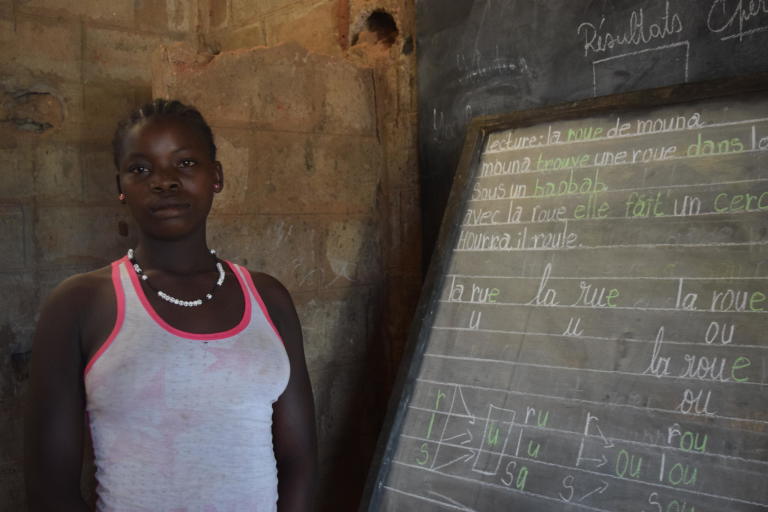 “
They set fire to houses and took everything we owned. That’s how we lost everything.
Davilla, 16, from Kemo prefecture in the Central African Republic (CAR)

Davilla is the third child in a family of eight. She lives in her mother’s house together with three of her brothers in Dissikou, a village in Kemo prefecture in the south of the Central African Republic (CAR).

Since its independence in 1960, CAR has seen continuous political crises involving dictatorship, military coups and armed clashes. In December 2012, civil war broke out in the country and a brutal conflict ensued between various non-state armed groups divided along ethnic and religious lines.

In 2014, the armed groups agreed to a ceasefire and elections were held two years later. Unfortunately, the humanitarian situation today is still alarming, and more than half of CAR’s entire population remains in desperate humanitarian need.

A childhood marred by violence

Davilla and her family have been heavily affected by the violence.

“My father was killed during violent clashes. My mom, my three younger brothers and I had to flee our village when armed groups attacked,” she told us.

They would spend six months in the bush hiding in fear. The fighting was so bad in Kemo prefecture that schools were forced to close between 2014 and 2017.

“2014 and 2015 were really difficult for me,” Davilla explains. “And with all that happened, I lost four school years because I couldn’t study. I should be in high school already, but we were forced to run for our lives and live in the bush for far longer than expected.”

Today violent attacks are less frequent, and schools have slowly reopened their doors. With funds provided by the Central African Republic Humanitarian Fund (CAR HF), the Norwegian Refugee Council (NRC) is organising classes to help children catch up with their studies and eventually return to school.

Davilla is one of the students currently taking these classes.

“I’m really happy now,” she smiles. “The school is my future. For my mom it was very important for me to be able to go back to school. She would rather I learn something in class than just stay at home. My mom thinks this will give me good opportunities later in life.”

Davilla is now able to catch up on what she had missed over the last few years. The programme has also allowed her to learn about some topics that were not discussed at home, such as menstrual health and what to do when she is on her period.

“Our teacher took the girls aside and talked to us about personal hygiene, but also about menstrual hygiene. I had not really talked about this with other people before. We also received kits with soap and cloth which the girls can use when we are on our periods,” she shyly explains.

This is important, as in the Central African Republic, girls often do not attend school during their periods, which means that they miss between 10 and 15 per cent of their classes.

Davilla is more determined than ever to continue her studies in order to pursue her dreams. She would really like to become a teacher herself, or a nurse at her village’s health centre.

“The nurses at the health centre are well respected,” she explains. “And it is a super interesting job where I would be able to save people’s lives and help them. I also encourage other girls in the village to go back to school and to never give up on their studies.”

“It would really be great if NRC could continue its programme. It has helped a lot of us already, but there are still children who would benefit from more education help,” she concludes.

The Norwegian Refugee Council (NRC) has trained 200 teachers and provided school supplies for 2,310 out-of-school students in Kemo prefecture, thanks to funding from the Central African Republic Humanitarian Fund (CAR HF).

Read more about our work in the Central African Republic (CAR)