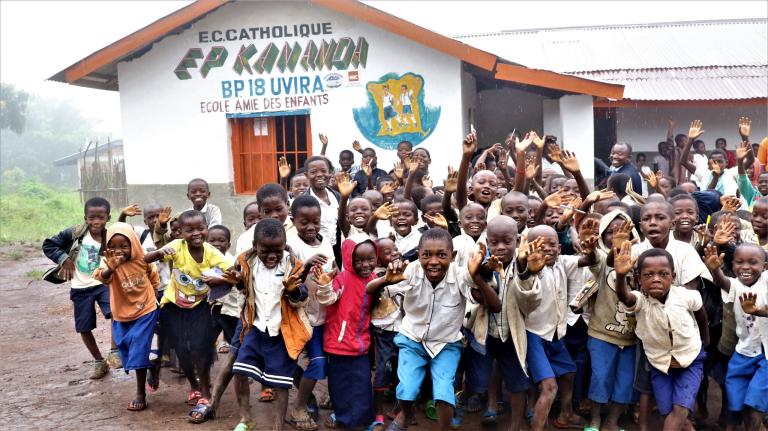 Atembo’s school, Kananda Primary School, is located in a village sharing its name within the gold-rich province of South Kivu, in the Democratic Republic of the Congo (DRC). Most residents subsist by farming or through artisanal gold mining on the outskirts of the village. In recent years, repeated clashes have broken out between armed groups representing either landowners or pastoralists. Between 2017 and 2018 this security situation significantly disrupted the lives and education of Kananda village’s students. In fact, in 2017, all students and teachers had fled due to multiple armed attacks. Today, though the security situation is still volatile, students and teachers have begun to return to their schools, only to find severely damaged schools and classrooms.

Kananda village’s primary school was one of several to be damaged because of armed conflict in the DRC. Over the last two decades, the education of millions of Congolese children has been repeatedly interrupted by intercommunal conflict endemic to this side of the country. At least 7.4 million children between the ages of 5 and 17 are out of school across the country. Many children live in remote and hard-to-reach communities like Kananda. Because of the inability to afford school fees, many have dropped out of school.

To address the situation, the Norwegian Refugee Council (NRC) works closely with conflict-affected communities to rebuild and rehabilitate damaged and destroyed schools, organise catch-up classes and train teachers to ensure children get access to a quality education.

In her crisp white shirt and navy-blue skirt, thirteen-year-old Francine proudly walks to Asifiwe Primary School in Kananda village. She is one of the 14,000 children to benefit from NRC’s education programming in South Kivu’s south-eastern Fizi territory. In 2018, Francine’s father was killed by militia men in an attack on the village. Since then, no one was able to pay for her education and she was expelled from school because of non-payment of school fees and eventually had to drop out for a year.

"My mother had no money to pay for school,” she says. "I had to stop going to school and help her farm the field."

However, in early 2019, she attended the NRC’s catch-up classes where she developed her French language skills, along with math and other subjects. She also received school supplies such as notebooks, rulers, and pens and pencils from the program. Today Francine can read and write in French at an elementary level.

Because of roof damage from bullets, when it rained, classes in Kananda primary school would have to be suspended, as the inside of their classrooms would begin to flood. In addition, the sanitation infrastructure in the school and throughout the village was dilapidated or non-existent. Students risked their safety and health by using the crudely constructed, uncovered latrines.

With the support of Education Cannot Wait, NRC patched the damaged roof to ensure that classrooms, students and materials would remain dry when it rains. Metallic doors and window frames were provided, and the school was repainted. Latrines were rebuilt and covered for conditions that are more sanitary. The learning environment has greatly improved and the number of enrolled students has increased from 240 students in 2018 to 340 students in April 2019.

Kananda Primary School is just one of 32 schools rehabilitated by NRC in South Kivu province. This assistance, however, is only a drop in the ocean. There are huge needs, which are still unaddressed within the province and throughout the country. We need further funding efforts so that we can continue rebuilding destroyed schools, organise catch-up classes to help children out of school so that they can access quality education in a safe and protected environment.

NRC collaborated with Danish Church Aid (DCA) and two national NGOs, Collectif ALPHA UJUVI and Caritas, to implement the Education Cannot Wait-funded project. Through this project NRC rebuilt destroyed schools and restored proper sanitation and water points in schools. NRC also provided notebooks, pens, pencils and other school materials to children and has trained teachers on psychosocial support. In addition, NRC paid the final examination fees for some students in sixth grade and organised trainings for teachers on risk reduction plans as well as a training of Parent-Teacher Associations on good governance in schools.