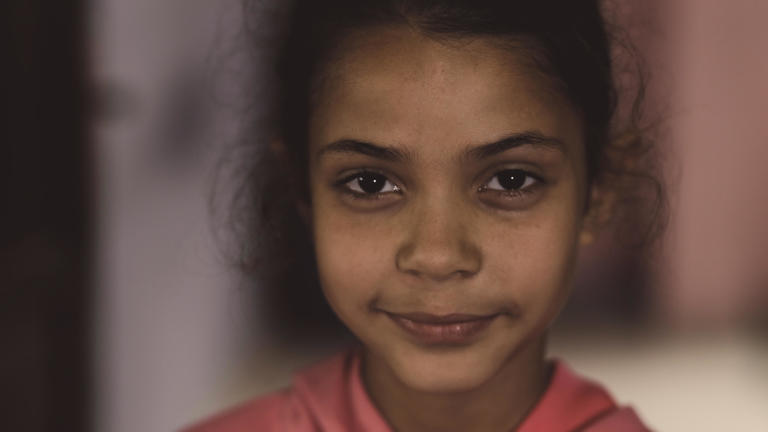 
Children in Gaza haunted by violence

Kristine Grønhaug Published 29. Mar 2019
Palestine Education
Read caption Nour struggled with nightmares after her brother was killed. She received help from NRC's Better Learning Programme. Photo: Ahmed Mashharawi/NRC
For the children of the Gaza Strip, the past year has been one long nightmare. After her brother was shot in the head and killed, Nour, 11, started having disturbing dreams night after night.

On 14 May 2018, a young man lay in a coma at Al-Quds Hospital in Gaza City. He had an open head wound and shrapnel in his chest. He had several tubes in his mouth. Someone had fastened a piece of paper to him that read, "anonymous".

When arriving at the hospital, Umm Muhammad did not recognise her son. She thought it was someone else. When she understood that it was Mahmoud, she fainted.

Umm Muhammed had five children; Mahmoud, a little girl named Nour, and three others. Now, she only has four.

Umm Muhammed recalled how just a few days earlier, Nour’s grandmother had passed away. At that time, she and her husband asked Nour if she wanted to see her grandmother one last time to say goodbye.

The next day, Nour became seriously ill. She had severe head and stomach pain. Her parents took her to the hospital in Gaza City. This happened to be the same day that Mahmoud was shot and wounded.

The doctor said that Nour had to be transferred to a hospital in Israel, but Nour’s mother Umm Muhammed was unable to secure a permit to enter Israel, so could not go. Nour’s aunt took her to Israel, where she received treatment and medication and was discharged to return home to Gaza after six days.

Nour recalled, “the day after I returned home, while my mother was praying to God for Mahmoud, who was in a coma in the hospital, my other grandmother suddenly started shouting. I heard my mother ask: ‘What’s going on?’ and my grandmother shouted, ‘Mahmoud is dead.’”

“We cried all night. We were filled with despair.”

How we help children with trauma

The nightmares come because the child has experienced something traumatic. They relive the horrible event – night after night.

“Having trauma nightmares gives you an overwhelming sense of hopelessness, because you don’t get any help from anyone. You are completely alone,” says Jon-Håkon Schultz, professor of Educational Psychology at the University of Tromsø. Schultz visits Gaza often, where he continues to develop NRC’s Better Learning Programme, in partnership with NRC’s education programme team. He also leads the research associated with the programme.

Among other things, children learn to talk about their trauma and how they can control their anxiety through breathing exercises. The results have been very encouraging: For children who were having an average of five nightmares per week, 70 per cent no longer have nightmares, or experience them just once a week.

Nour and Mahmoud used to play with their sister Asma on the roof of their house. This is something Nour remembers fondly when she thinks of her brother. He had a job and was able to help support their family.

The trauma of seeing Mahmoud wounded and lying in the hospital started Nour’s nightmares. The pain of these nightmares not only affected Nour, but also her mother.

“I would dream of Israeli soldiers,” said Nour. “They were throwing us out of our house because of my brother and because my grandmother had died. They were wearing black clothes, had their faces covered, and had weapons. They hit us, kicked us out, and pointed their guns at our heads.”

Read also: Bringing back the nightmares

“Nour dreamed that Israeli soldiers attacked our house and killed both me and my family,” said Umm Muhammad. “When she was scared, she wanted me to hold her. I used to wash her face with water while telling her it was just a dream, that nothing bad was going to happen. That it was just a nightmare. Then she would sleep in my bed.”

As the nightmares continued, Umm Muhammed received a call from Nour’s school to advise that Nour had begun to fall behind in her school work. Umm Muhammad told Nour’s teacher that her daughter was struggling with nightmares, was scared, and could not sleep.

The school decided to enrol Nour in NRC’s Better Learning Programme, which was developed in partnership with the University of Tromsø, in Norway.

NRC trains children, teachers and school communities in a range of behavioural techniques to help them learn to cope with trauma and self-regulate their emotional responses, including breathing exercises, relaxation and drawing. The results have been very encouraging: For children who were having an average of five nightmares a week, 70 per cent no longer have nightmares or experience them only once a week.

“After only a few hours with my teacher Mrs Kefah, I stopped having nightmares,” said Nour.

The story of Nour is not unique; many families in the Gaza Strip are struggling to cope with the devastating economic situation and protracted violence.

The Gaza Strip has been governed by the militant group Hamas since 2007 and the population has suffered under an Israeli siege for over 11 years. Unemployment is as high as 70 per cent in some municipalities, 53 per cent of Gaza’s people live in poverty, and as many as 68 per cent are food insecure.

During the past year, Palestinians have regularly demonstrated in the Gaza Strip, especially along the  perimeter fence with Israel. The protests have been answered with violence, including against children. According to the United Nations Independent Commission of Inquiry, Israeli forces killed 34 children in connection with demonstrations during the nine months between 30 March and 31 December 2018. 1,642 children were injured by bullets or bullet fragments, shrapnel, rubber bullets and direct hits from tear gas canisters.

Human rights groups have reported that six children died during the demonstrations in the first 10 weeks of 2019.

According to UNICEF, more than 25,000 children in Gaza need psychosocial care.

The nightmares can return

NRC interviewed 300 schoolchildren from 30 schools in October 2018, and again-in December 2018; mostly in schools located in areas near the perimeter fence with Israel. The children who participated in the survey were between 10 and 16 years old. According to the survey, 68 per cent of schoolchildren demonstrated clear signs of psychosocial distress. Eighty-one per cent struggle with their school work because of conflict-related stress. Fifty-four per cent have no hope for a brighter future.

Since Mahmoud was killed, one of Nour’s other brothers has been involved in the demonstrations along the perimeter fence. He threw stones and was wounded.

“I’m afraid something is going to happen to her. I love her so much.”