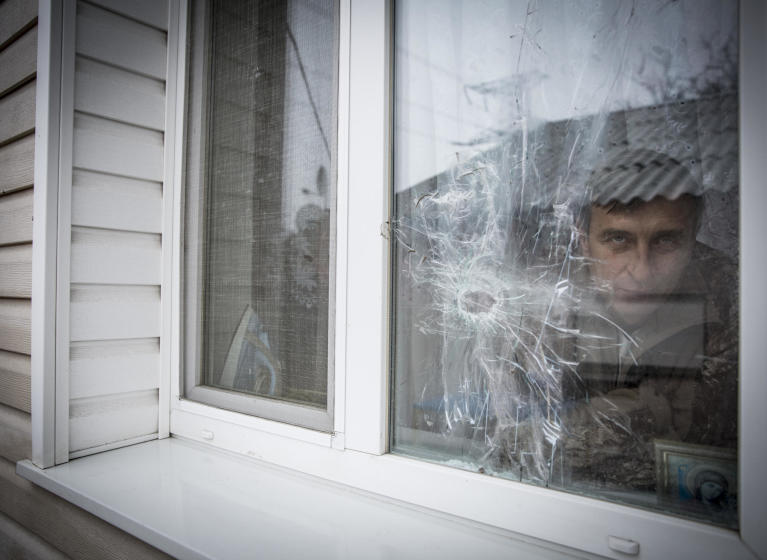 
5 facts after 5 years of conflict

Kristina Nechayeva and Thale Jenssen Published 03. Apr 2019
Ukraine War and conflict
Read caption "I missed my home." Yurii Polieshko, 55, and his wife Liudmyla, 51, live near the contact line in Donetsk region. They returned to their village after some time in Russia. Their house has been damaged, there's still frequent shelling and they've lost their income. For the last three years, they've survived on humanitarian assistance and relatives’ support. Photo: Ingebjørg Kårstad/NRC
After five years of armed conflict in eastern Ukraine, the large-scale humanitarian and displacement crisis continues to affect 5.2 million people, with 3.5 million in need of humanitarian assistance and protection. But the outside world seems to have forgotten all about it.

Here are five things you should know about the crisis:

#1 Defying dangers to see their families

In April 2014, hostilities broke out in eastern Ukraine. Since then, the territory has been split between government-controlled areas and non-government controlled areas. As a result, a once-integrated community is now divided by a 427-kilometre long front line, the so-called "contact line". There are five checkpoints across the contact line – four in the Donetsk region, and one lone, damaged bridge serving all of the Luhansk region.

Every month, around 1.1 million people cross the contact line, despite deadly risks of regular shelling, landmines and explosive remnants of war. They cross to visit their families, go shopping at markets, obtain documents or access essential state services such as health care, as well as to check on their property on the other side.

People are forced to wait at the checkpoints for hours, both in harsh winter conditions and under the scorching summer sun. Despite the considerable efforts made by the government and humanitarian organisations, checkpoints still lack basic services such as hygiene facilities, drinking water and first aid.

The conflict in eastern Ukraine

In 2013, thousands of Ukrainians started demonstrations first in the capital of Kiev and then in other cities, driven by the support of the European Union Association Agreement and a strong disagreement with policies of the government, which was widely seen as kleptocratic and infringing democracy and rule of law.

The demonstrations culminated in a series of violent events and the tragic deaths of more than 100 people – both protesters and law enforcement officials.

In Donbas, a densely populated and heavily industrialised area in eastern Ukraine combining the two regions of Donetsk and Luhansk, there were mixed reactions to the events happening in Kiev and other cities in Ukraine. Before the conflict, Donbas used to be the home of 6.6 million people, 15 per cent of Ukraine’s total population, and generated 16 per cent of the country’s gross domestic product.

The security situation in Donbas quickly deteriorated and led to the Ukrainian government’s loss of control over certain parts of the Donetsk and Luhansk regions, accompanied by active hostilities. Despite the 2015 Minsk ceasefire agreement (Minsk II), hostilities continue to this day.

The hostilities take a heavy toll on civilians. Over 3,300 civilians have been killed and approximately 9,000 injured since the beginning of the conflict. More than 50,000 residential buildings on both sides of the contact line have been damaged or destroyed, in addition to schools, hospitals and water facilities.

Large-scale mine contamination poses lethal risks to civilians, including to half a million children living within the 20-kilometre area on both sides of the contact line. It also limits conflict-affected people’s access to markets, health care, agriculture and winter heating supplies.

The protracted crisis has stretched people’s resources to a breaking point, with families losing their livelihoods and having no other option but to sell their belongings or reduce costly expenditures.

The higher level of unemployment than in other parts of the country and sharp economic deterioration force people in eastern Ukraine to make impossible choices on whether to buy food, medicine or send their children to school.

Weakened social protection systems, disrupted access to markets and suspension of social benefits severely affect those who are the most at risk, such as seniors, single parent households with children and people with disabilities. More than one million people, including those who are internally displaced, do not have regular access to food and need livelihood support.

Conflict-affected people in eastern Ukraine don’t have full access to their rights.

Almost 700,000 pensioners are not receiving their pensions because of the restrictive policies linking payment of pensions to conflict-affected people with the requirement to register as an internally displaced person. A large number of such pensioners regularly face the risk of arbitrary suspension of their pensions, which constitute the only source of income for the majority of older people affected by the conflict.

An estimated one million people has been permanently displaced by the armed conflict.

With such large-scale displacement continuing for five years, internally displaced people need to be able to resume a normal life by returning home voluntarily, by voluntary resettlement or integration into host communities.

In a situation of a protracted displacement, the prospects for displaced people to integrate into local communities remain uncertain. With their resources stretched to the limit, many displaced families face discrimination and experience challenges in finding housing solutions and accessing services, as well as securing stable employment. The inability of internally displaced people to exercise their voting rights in local elections also remains a barrier to integration into host communities. 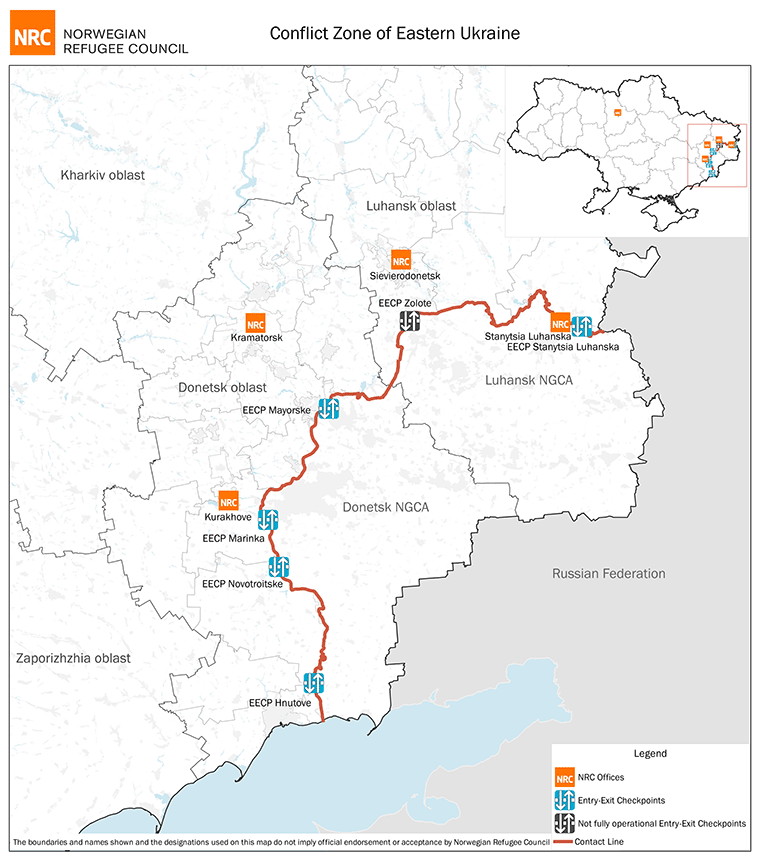