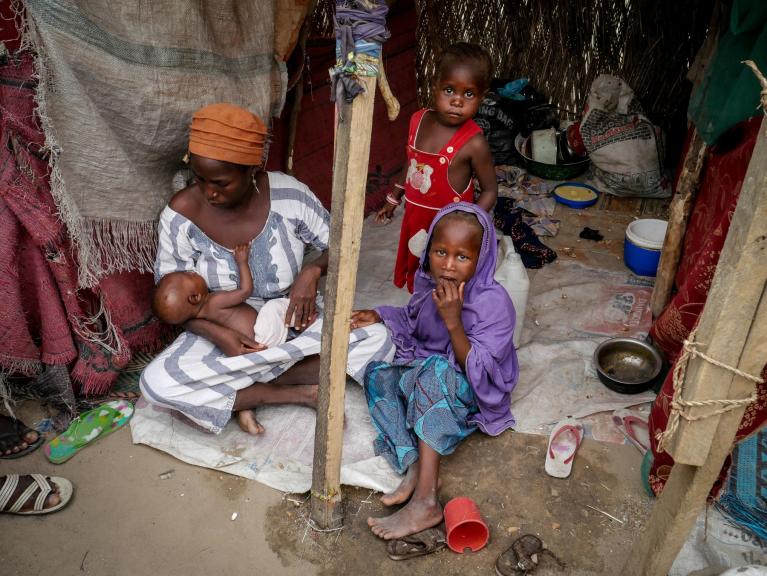 
Beyond Boko Haram, civilians are suffering

Hajer Naili Published 26. Jun 2019
Nigeria Livelihoods and food security Internal displacement Shelter and settlements War and conflict
Read caption Suweba is 35 years old. Thirteen days after fleeing her hometown with her four children, she gave birth to a baby girl. Her husband remained behind when insurgents entered her hometown to ask them to leave. Since then, she hasn’t spoken to her husband and doesn’t know whether he is alive or dead. Photo: Hajer Naili/NRC
Boko Haram has dominated the international media coverage of Nigeria in recent years. But beyond the high-profile attacks and kidnappings, civilians are suffering in their millions. NRC media adviser Hajer Naili meets some of the families affected by the ongoing humanitarian crisis and tells their stories of hunger, overcrowded camps and emotional trauma.

Suweba, a mother of five, gave birth to a daughter just 13 days after arriving at a makeshift camp in Maiduguri, in north-east Nigeria. Her baby girl is sleeping on the piece of fabric and plastic that serves as a floor. She lies next to plastic bags and cooking pots, the sole belongings of the family.

“I still have not eaten today. We eat either in the morning or in the evening, depending on where there will be food,” says Suweba wearily. To be able to eat at least once a day, she has to send two of her children out to beg so they can buy food.

Suweba’s baby was about three weeks old when we met. It was heart-wrenching to realise that her first days in this world were spent in a tiny tent, deprived of comfort, and breastfed by a mother who barely eats enough to produce milk.

Suweba is one of about 1.7 million people suffering from food insecurity in north-east Nigeria, according to the United Nations Office for the Coordination of Humanitarian Affairs (OCHA).

The Boko Haram-led insurgency in north-east Nigeria will mark its ten-year anniversary in July 2019. However, most of us heard about it for the first time in April 2014 following the kidnapping of 276 schoolgirls in the town of Chibok. This event drew international attention and resulted in the #BringBackOurGirls movement.

Yet, for five years prior to this, women, men and children had been suffering from attacks and the tyranny of an armed group, without any international alarms being raised.

International attention from political leaders and the media often takes place in a selective fashion – either to serve a political agenda or to shape a narrative that sells. Humanitarian stories, especially those in Africa, rarely catch the interest of news editors, much to the frustration of freelance journalists who are keen to spread the word.

The suffering in Nigeria tends only to attract international attention when members of Boko Haram launch spectacular attacks or on special occasions such as the recent presidential elections. Yet, the mere fact that more than 7 million people – twice the population of Berlin – still need humanitarian assistance should be enough to warrant the world’s attention. Stories like Suweba’s have been overlooked for too long.

When we met, Suweba was living in a makeshift tent no more than five square metres in size, made out of plastic and bed sheets. This tiny space served as a living, cooking and resting place for her and her five children.

Currently, more than 600,000 people are staying in highly congested displacement camps across north-east Nigeria, according to recent Norwegian Refugee Council (NRC) estimates. Of these, 160,000 have as little as five square metres per person to live in. This is well below the international humanitarian standard for displacement camps of 45 square metres of usable surface area per person.

When displaced people are forced to live on top of each other because of a lack of available land, the risks of disease, fire, community tensions, and domestic and sexual violence increase. As thousands of people continue to be displaced, relieving overcrowding should be a high priority for the government and the international community.

Fire in camp: families left to fend for themselves

The following week, while driving, my colleagues and I witnessed a fire at a displacement site in the town of Tungunshe. Women and children were trying to save everything they could from their straw-made shelters, while men, young and old, were fighting the flames with water-filled pots and sand.

A tiny spark from a cooking stove had set ablaze several tents, burning to the ground the temporary homes of several dozen displaced families. More distressing than seeing the shelters being destroyed was the sight of residents trying to put out the fire by themselves because no help would come.

In fact, no-one came to help these families all day. A few hours after the fire, large swathes of grey and black ashes covered the soil – a painful reminder of what used to be a refuge for over 50 displaced families.

Aisha* was carrying her little brother and standing next to a half-built hut that served as a shelter for the whole family. Her mother was not around so I waited for her to come so I could ask permission to use her daughter’s photograph and hear their story.

While waiting, I chatted with the girl. After a few minutes of exchange, she burst into tears and walked away. I felt terrible when I saw the fear and panic on Aisha’s face. When her mother came, I explained what had happened. The mother told me that the whole family had been displaced and that the violence they had witnessed as well as their life of displacement had been traumatic experiences.

Children and adults who live in the middle of a prolonged conflict are damaged both emotionally and psychologically. Some are affected for a limited period of time, others for the rest of their lives.

Conflicts and wars do not just result in the loss of lives or the destruction of buildings and infrastructures. They result, more often than reported, in the slow destruction of human beings from inside – as women, men and children carry within themselves fear, anxiety and painful memories.

Their stories must be told

Over the last ten years, several million people in north-east Nigeria have seen their lives shattered, their livelihoods destroyed, their freedom of movement taken away and their future hopes dashed.

Many of them have been shunned, unwanted by their own communities because they had the misfortune to live in an area controlled by Boko Haram.

*Name has been changed